Among the countless colorful curios to be found in artist Raul de Nieves’ Bushwick, Brooklyn studio is an ongoing project to create 50 different versions of the same painting—a scene in the legend of Saint George and the dragon—and a three-and-a-half-foot, freestanding doll that he constructed by hand, almost entirely from beads. “Making it stand was impossible,” de Nieves says. “If I was to add five beads onto his foot, he would fall.” Recently, the Mexican-born San Francisco transplant has been channeling his obsessive, almost devotional artistic process into sculptures you can wear—if you’re daring, that is. Visit the website for glam boutique Maryam Nassir Zadeh and you’ll find bead-and-glass necklaces that de Nieves knotted over and over into bulbous, mushroom-like growths and knit sweaters that he extended so long that they wrap all the way around the body and to the floor. Factor in the tall, grotesquely elaborate beaded pumps he’s been making lately, and you realize that while functionality can be a byproduct of de Nieves’ designs, it isn’t necessarily the goal. Think of them as ways to inject a little madcap fantasy into your humdrum, day-to-day routine. 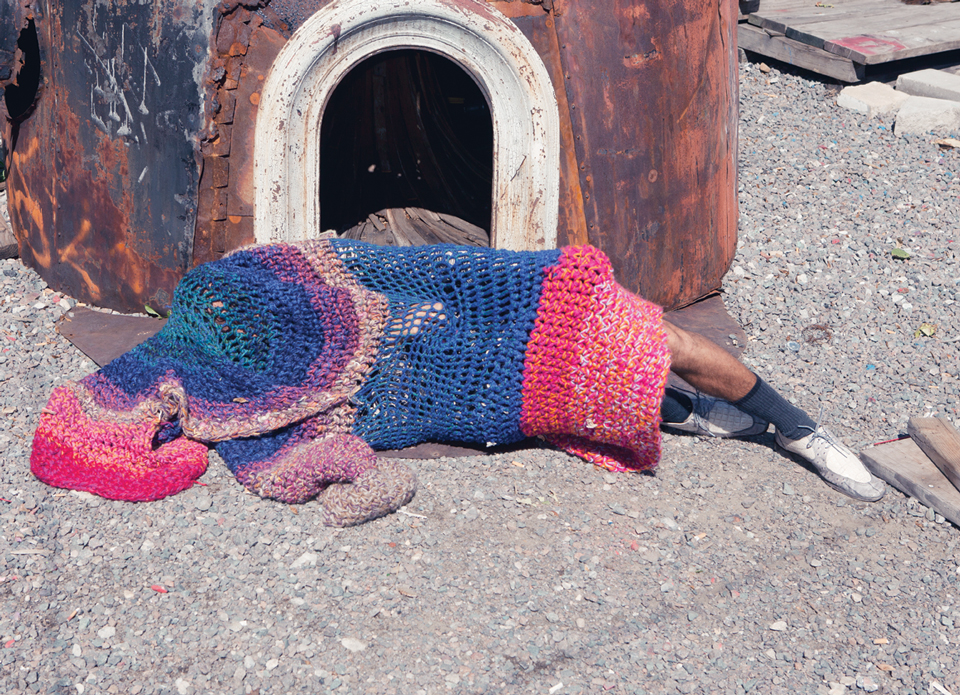 How’d you get into obsessive beadwork?I grew up in Mexico, and I saw a lot of this craft-oriented folk art made on the streets. A lot of people that are artisans in Mexico would work on the streets and just lay their things on the floor, like beaded necklaces. I chose beads because it’s also such a cheap thing to get. I can get a huge bag of beads for a hundred dollars, and it can make a couple of things. I love the idea of mass-produced objects, but that’s not what I’m trying to create. I really want to feel like it is a one-of-a-kind object and a part of me, like this is me sitting there and creating a moment.

Your work is a craft as much as it is an artistic practice. When I lived in Mexico, I didn’t even know what art was. It’s not that in my culture they didn’t teach us that, but at school they mainly were teaching you how to cook, very manual things. How to make a pair of pants, to embroider or crochet. Practical skills. My mom was big on, You gotta learn this, because she would always make us clothes, like sweaters or full outfits. She came from a very practical background, like, Let’s do this. You can make this happen.

How did you start making the beaded shoes? They’re so ornate that they’re almost not functional. You probably wear your shoes for five months, and then they die. I realized that I had this suitcase of broken shoes that I couldn’t part with, and I kind of wanted to give them a new life. It’s almost like encasing them in this pure joy, making them a relic of an experience or a time in my life. They just become a part of you. It’s very interesting to want to encase something and make it be pristine or beautiful forever. I actually wore them for a really long time out to parties. Now, they’re more for adornment—it’s more for a special occasion, like if I’m playing with my band.

The sweaters you make can get outrageously long. Were you inspired by the Snuggie at all? Yes. They’re pretty flattering in the end, and they’re pretty comfortable for winter, because I feel like I am snuggled inside a blanket. You could wear it so many ways. I probably could use different stitches, but it’s more about the idea of not paying attention and just letting it happen. That’s why I called them performances—because they’re a sculptural type of work.


“If I didn’t have an artistic practice, sometimes I think I would be dead.” 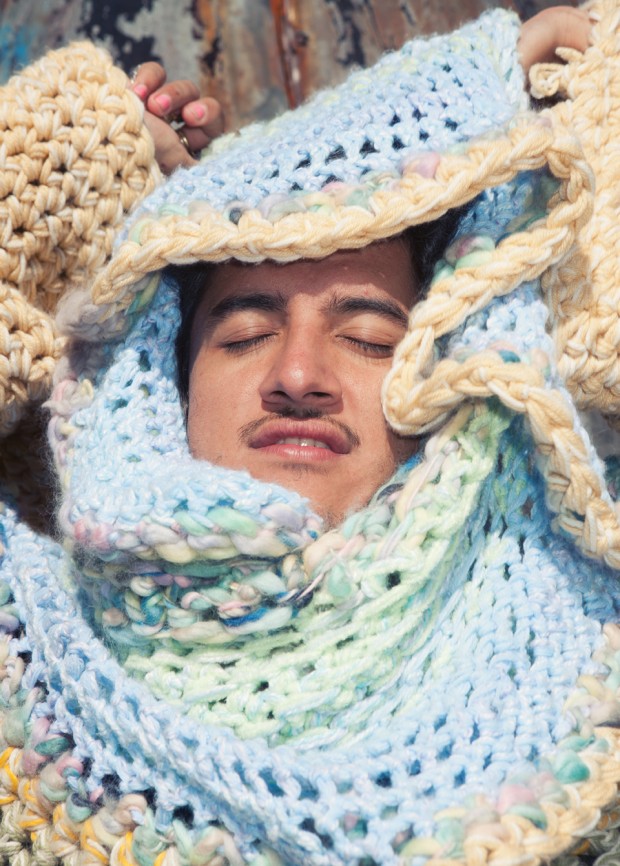 What’s the story with the necklaces? I got this rosary a while ago at a very special church in Mexico that my aunt took me to. She was like, This is for when you’re sick—you come here and you buy this relic. It has this magical touch to it. I wore it forever. I had all this jewelry that my family gave me, and then my mom finally gave me this medallion that my grandmother wore her entire life, and I was so nervous to wear it just on a chain, so I sewed it onto the rosary to make sure it would never fall off. I wanted to hold them close to me, so I started tangling together all these precious things my mom and my brother had given me. Then people would gravitate to it, and be like, Oh, I love this rosary. Where did you get it? Obviously, I can’t just buy gold chains and wrap them, because I don’t really have the funds to just do that, and I wanted to keep it simple. It’s made out of plastic, glass and stones, but it’s all handmade, so that makes it special.

Is making all this super-detailed work therapeutic for you? With a lot of my work, it’s like a relationship: you don’t really learn much from people until you have [spent a lot of] time with them. The longer you spend, the more you get to know about a person, and even yourself. My paintings are almost like mirrors of me, because there are times when I’m feeling very distressed and I’ll come in my studio and I can take the angst out in these works. I wouldn’t say I’m crazy, but obviously in my head there’s so much happening. Even in my dreams, sometimes I’m dreaming the most bizarre things and I’m like, Can’t I just relax? This is where I come to relax. If I didn’t have an artistic practice, sometimes I think I would be dead.