Presented by FADER and Sprite, Obey You Collective: South Africa is a series devoted to showcasing artists, trail-blazers, and bright young talents from South Africa. For this installment, we spoke with a graffiti artist from Durban named pastelheart.

Pastelheart has trouble resisting temptation. "Being young, it's hard not to party," the 24-year-old confesses over Skype from his apartment in Durban — a warm, sprawling city on South Africa's east coast. But even with his tendency to get wild, he regularly creates visually striking street art that's as unpredictable as he is. Using surreal, occasionally nightmarish imagery and the color palette of a club kid, pastelheart paints murals that are simultaneously euphoric and alienating, like wall-sized illustrations from a post-apocalyptic picture book. Though he seems a bit distracted and mostly speaks in fragments, as if he's in another world, he has a uniquely focused vision that he's more than happy to discuss. Below, he opens up about getting arrested, his love/hate relationship with the internet, and the highs and lows of being a young, working artist in present-day South Africa.

What did you do today? I was running around, trying to get my driver’s license, trying to get paid, standing at the bottom of my swimming pool. I have no day job. I’m poor. I make art and I create murals for companies and restaurants, I’ve done a few posters for parties. I sell art, that’s pretty much how I survive. No schedule, nothing professional. Just wake up and paint.

It’s summer there, right? I don’t know what season it is.

What’s your neighborhood like? It’s a really small place. The art scene is really small, but it’s connected. Everyone helps each other out and we all get along. We’re close to the ocean. That’s a big thing for us Durbanites — life on the beach. I’ll be moving to Cape Town soon, I should be moving next year. See where that goes.

How was growing up in Durban? My childhood has been quite crazy. I went through many phases, getting in trouble all the time. I think art was the last [phase]. I’ve done art from the age of 15 or 16. Fine art was my biggest inspiration. I didn’t see much graffiti. I started on paper, just messing around — but cool messing around. At 18 I was doing what I can do now, but on canvasses. It took me quite a while to get perfected on the walls. My style’s evolved but the content’s been pretty much the same, it’s just been harder to do with a spray can. It’s been a long journey. I’m just trying to carry on, you know?

How do you describe your aesthetic? Take a bad dream and mix it with reality. I don’t know if it’s street art or graffiti. My colors, you could say, are inspired by pop. I really don’t like to stick to a certain category, but pop art is definitely amazing and a huge inspiration. My biggest two inspirations would be fashion and the internet. The internet’s a huge thing. That’s probably our main inspiration. Even though I hate the internet so much. So much beef. 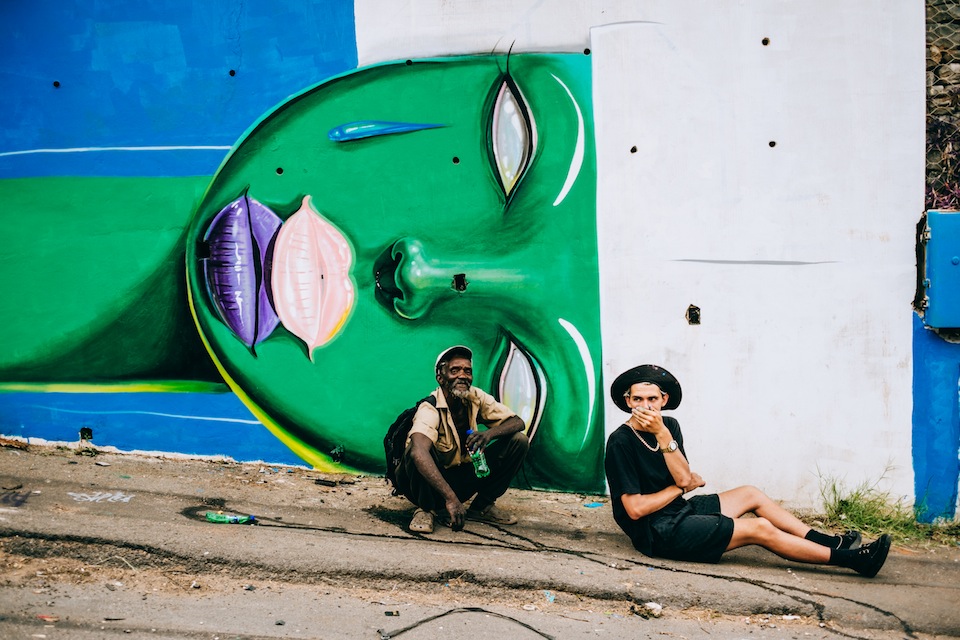 You created a couple original murals for the Obey You Collective: South Africa series. What was that process like? It was really fun. I was definitely brought out of my comfort zone. Trying to paint much larger scales murals was definitely challenging. We actually painted five walls, they came out really nice. They were all new walls that I went and found and had to get permission for. Some of the areas were quite hectic. There’s a photo of me (above) and this old African man in front of the wall, with like a green alien on it. That guy was tripping out.

How do people outside of the art community react to your work? For people who don’t make art, I’d say it’s really positive. Most of artists have different styles, so we don’t really judge each other. We try to work together as much as we can. This environment has had a huge impact on what I do, because this is where I started. It’s my roots. I try to travel as much as I can, around the country, to make murals. My style doesn’t really change, but the environments around you interact with your art, so I try to put out a positive message according to the area.

Are there ever negative repercussions? I have been arrested for doing a wall that I had permission to do. It was quite weird, and I had to give a fake name. I didn’t have to go to jail, I just had to give my bosses number. I don’t do illegal graffiti. I used to, but not much anymore. I try to stay out of trouble.

You mentioned fashion as an important influence, too. I have an online store called Club Pastelheart with another artist. We sell clothing, shoes, beanies, sunglasses, shoes, weird stuff, other art. A lot of my friends are into fashion, and it’s one of my passions. The weird thing is the fashion that we create has nothing to do with graffiti. There are certain elements that come through but it’s a different style. I do have some items with my art on it, but we try to create simplified fashion.

What’s it like being young in South Africa right now? It’s quite scary. I think South Africa is definitely a blessed country with all the potential we’ve been given and the immense changes we’ve gone through, and I think art is one of the biggest categories keeping us strong. I feel supported, but you know how it goes — we’re artists, we’re weirdos. We’re supported but we’ll always have our moments of insecurity, or whatever. I’ve always tried my best to make beautiful art, it’s my life. That’s the one thing you can rely on when people let you down. Art won’t break your heart.