Personal History: Anna McConnell on Living in a California Commune

Rookie’s Anna McConnell shares the story of how she got out of New York City and into life as a West Coast hippie.

Anna McConnell on living on a California commune

To celebrate our favorite publication for and by ’90s babies, our Newsprint and Style sections this issue are guest edited by Rookie Magazine.

Anna McConnell is a frequent contributor to Rookie, where she writes about issues of love and personal freedom. She also writes often about her life on a commune, and here she shares the story of how she got out of New York City and into life as a West Coast hippie. This extended version of her piece is slightly different than what appears in print.

Anna McConnell: I'm writing to you from a commune hidden deep in the forested mountains of Cascadia, hours away from town. There are about 30 of us here, youthful feral nomads learning how to homestead. We grow food, but supplement our desires for schwag from the city's trash (last week, I dumpstered more than 100 Greek yogurts from Shop-Smart). We recite poetry under candlelight, make zines and kraut and salves, brew wine using the yeast from our own vaginas. We study the occult, forge knives, skin hides, and let our goats lead us into the wild. We howl at the moon. We are forming a tribe.

The first time I came here, I was two years out of college, deep into the what-are-ya-going-to-do-with-yer-life anxiety that hits you after you've spent years pulling all-nighters in a cold library. I had no idea what I wanted to do with “my life.” All I really wanted was the time and space to not know.

Instead, I felt this immense pressure to succeed (at what?). The only job I'd managed to secure was as a salesgirl at a fancy boutique in Manhattan. Everything I did felt wrong. I felt a gnawing at my gut, like something was off.

I tried to discipline my antsy body with Adderall, Xanax, booze. I stopped eating. I forced myself to shmooze and act cute with people I wanted to punch. I was becoming an empty shell, destined to climb a ladder with no top.

Then, a grimy, gorgeous hippie kid named Nigh stumbled into my life. He had a flower tucked behind his ear and tagged DO WHAT YOO WANT TO DO all around the city. After one night, I was smitten. I told my boss that I was no longer sure I had a soul, and the next day I ran away with Nigh. We headed west, and eventually landed on this magic mountain, this haven for those who haunt the margins of the USA. 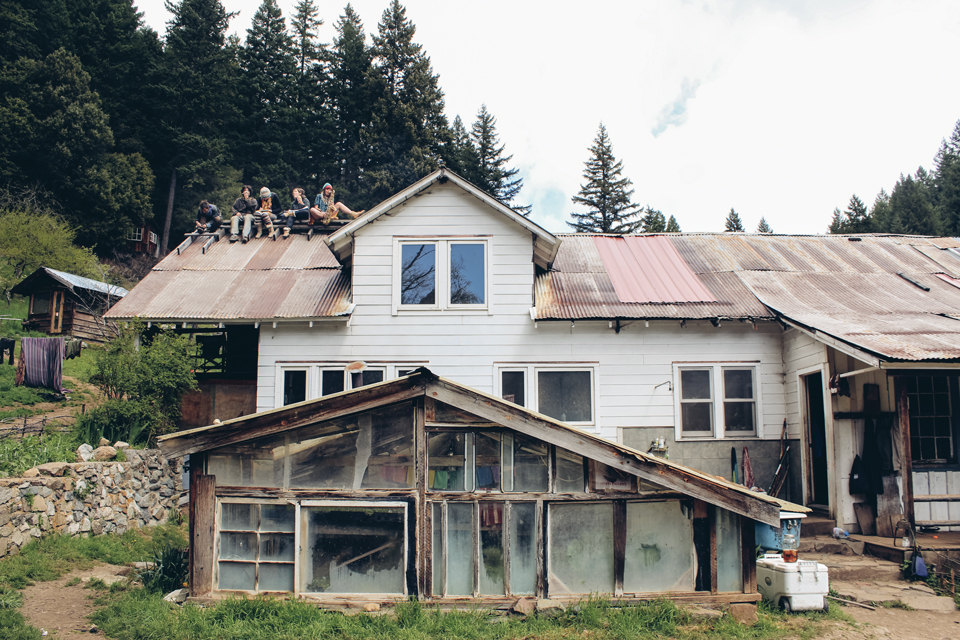 The commune was started by a group of radical anarchists in the 1960s. They had few founding principles, which we still abide by: no rules, no requirements, no policies. Free. Everything here is always changing. The residents used to be long-term homesteaders and their children; these days, we're a bunch of vagrants. At its peak, the commune housed 100 hippies, but since then the population has fluctuated. For a period in the 1990s and early 2000s, it was all but abandoned. Today, there are about 30 smelly kids squatting these dilapidated structures, scattered across this forest floor...

In previous lives, some of us held shit jobs at fast food chains, another was a fashion model, several more were political activists who were sick of do-gooder jobs that fed a system they despised. Many of us are artists who felt that schmoozing in the art-world chomped away at our spirits. One was a logger. One worked the carnival for six years hooked on speed and wandered north after a spirit came to him and said if he did not leave his life behind, this world would kill him. We all felt that our souls had been dying in what you call “the real world” and we call Babylon. 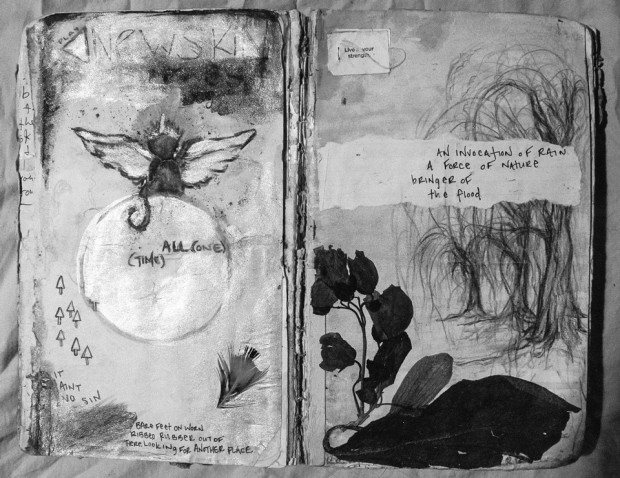 So I've been trudging around this mountaintop like a doofus, asking the hobo-hippies, How'd ya get so free? What follows are some BRIEF NOTES ON HOW-TO-LIVE-FREE.

WE STAY WILD, EVEN IN THE CITY. Trips to town become urban foraging expeditions: sneaking into Walmart to score freshies (new socks); lock-picking the chocolate factory; hopping trains to the coast, only to turn around and come straight back...

The traveler’s incantation: THE UNIVERSE PROVIDES. Magic happens when you stop playing the money game, let go of your possessions, live out of your pack, and share what you got.

Crow, who hails from L.A., and is hella muscular and always walking around the gardens on his hands, says the city—with its glass, concrete, lights that tell you when to stop, and when to go, and with its boxes, boxes, boxes—is a giant cage. We must break free, to realize our power as individuals, if only for the sake of our own dignity. “When the keepers release you into the wild,” he warns me, “you don’t really know what to do. When you are an animal in the zoo, you rely on the zookeeper.”

NATURE IS THE BEST TEACHER. On the night that I fell hard in love with Pasta, I'd drunk mushroom tea under the full moon, and we were gathered around the hearth, and Pasta looked like she was going to puke. She had her hand over her mouth and was swaying back and forth. I said, “Pasta, are you OK?” and she whispered, “I…I…I am going to explode love all over you,” and I nodded yes and she tackled me.

Pasta says she sees life as a video game and wants to explore all the worlds and “level up.” LOVE is the formidable skill she seeks to master. I said, “Oy! Pasta! How’d you get so full of love?” and she said, “We’re not so different from plants, Anna. Put us in shitty depleted soil and we will wither up and crumple. But plant us in healthy soil and give us room, and we will thrive.”

And when she told me this, I started to cry.

“Why are you crying?” she said. “What was your life like before?”

Is it better on the mountain? I don't know. When I'm up here, everywhere else seems absurd, but I know that when I leave, this place will seem like a crazy fairyland, totally disconnected from reality. I always think that leaving wherever I am and seeking its opposite will melt my anxiety away. It's the feeling of, When will my life start feeling real? It never does.