From Where I Am: Ten Years of Touring Musicians in Istanbul Documented

Photographer Aylin Güngör tells The FADER about her candid shots of touring musicians in Istanbul, new book and Turkey today.

"They came to İstanbul, where I live. I claimed this city is sad, they thought it is undeniably beautiful," writes photographer Aylin Güngör in the foreword to From Where I Am, a stirring new book that collects a decade's worth of Güngör's candid shots of musicians hanging out in her city, snatching a rare moment off their tour schedule. There's Gang Gang Dance's Lizzi Bougatsos eying up some Turkish jewels, Deerhoof sightseeing, Julianna Barwick chilling by the sea and Kurt Vile goofing about (check out the slideshow above). Güngör—who's also the editor-in-chief and art director of Istanbul's Bant Mag, a music, arts and culture magazine based in the Turkish capital—explains below that it's through their eyes that she saw her city afresh. With Turkey currently blighted by political unrest and bizarre social media bans, Güngör tells The FADER about Istanbul's creative community today, her book's beginnings and behind-the-scene tales from her shoots.

Where did the idea for From Where I Am come from? Ten years ago, we started a magazine in İstanbul called Bant Mag, and one of our first ambitions was to invite the bands that we liked. We immediately started on this plan. It was also the early years of my photography career. I was buying new good cameras each year to be able to shoot better and I was a huge fan of [British rock & roll photographer] Steve Gullick’s photography. We had met via email, and he was gonna come to Istanbul. The previous week, by chance, I bought the same Hasselblad that he uses a lot. He showed me the tricks of the camera on a boat cruising up the Bosporus. That was a very important, beautiful day for me. It changed my idea of photography. That Hasselblad became my favorite camera; I named it Steve. When you have a camera that you adore and feel comfortable with, you start to enjoy it like a spoiled kid.

After adding this camera to my collection, I think my confidence grew stronger, and I started buying even more cameras. Anyway, three years ago I realized that I have a huge collection of these moments that combined the city, music and the joyful times we’ve spent with all those bands. I decided to get them out of my system: there were hundreds of photos that I was not sharing with anyone. 2014 is Bant Mag's 10th year, so we thought it is a good time to publish, share and celebrate these ten years of memories, moments and photos.

In the book's foreword you talk about the contrast between how you perceive the city and how visitors do. What shaped that feeling? Each time [a band visits] there is a huge contrast of feeling between the bands and me. They instantly find [Istanbul] magical and fall in love with the city that I have a huge, love-and-hate relation with. When you experience the city with their mindset, you find yourself telling them your memories of the city: the view, the food, nightlife, people, street animals, etc. When you hear yourself, you realize that those were good times, good memories and [think] about what the city has given to you. But after they leave, you quickly fall back into your old mindset. Which makes you addicted to newcomers in order to love your city again.

There's a sense of ease and warmth to your photographs of visiting bands in Istanbul. What do you look to capture when shooting? I think the main reason for that feeling is that these are photos of moments where we were all having a good time. Most of the bands stay in Istanbul for a couple of nights and it is usually the highlight of their tour, so they are already in good mood, and ready to enjoy the time. Although initially music brought us together, the time we’ve spent was a lot more special I guess. I am not talking about all the bands in the book, of course, but with most of them I became friends. Different cultures but common sense of humor and taste in many things and ideas. 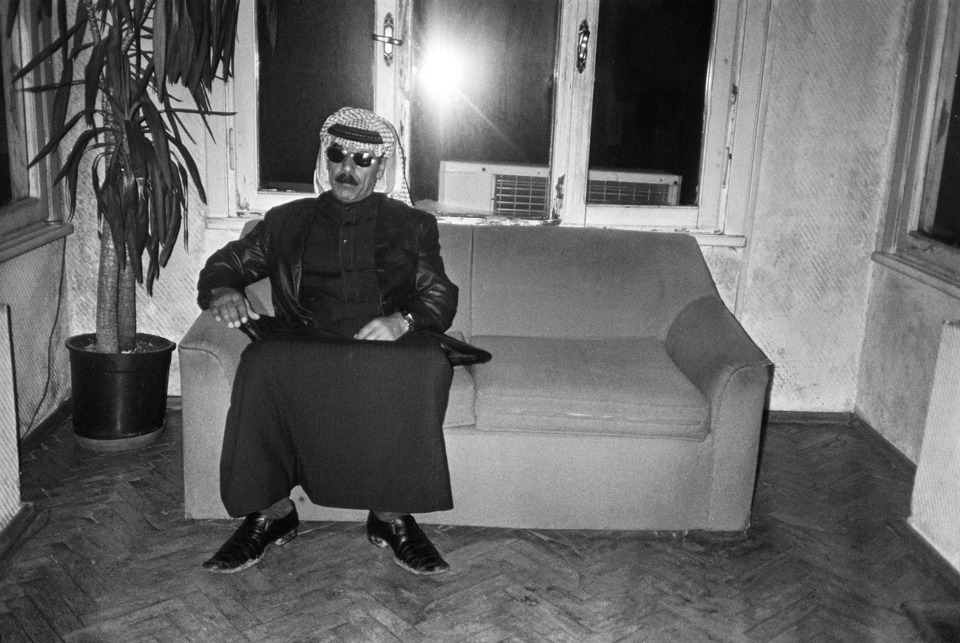 Who was your favorite to photograph and could you share any behind-the-scenes anecdotes? One of my favorites was with the TV On The Radio gang (Tunde, Kyp, Ryan, Ohal, Suzanne and Smoota). We spent a whole day on the island of Burgaz, running away from hungry dogs, working on open-air gym machines and having a splendid dinner with a view of the sea of Marmara. Then the next day going to play bowling and than going to a dub and reggae party.

Omar Souleyman [pictured above] was also very big fun. He was in İstanbul for the recording of the Björk track. We spent very limited time [together], with very limited language. He was late to our meeting, and I saw him from the window running down the hill with his amazing outfit, looking like a super hero under the streetlight. After we met we were trying to find common words in Arabic and Turkish, [but] mostly friendly gestures were ruling. He was very kind and offered me Gitanes cigarettes all the time.

The most up-to-date photo in the book is of Elijah Wood and Zach Cowie [who DJ as Wooden Wisdom together] and DJ Fitz. They came to DJ for our Bant Mag’s 10th year party. Our time together in İstanbul was an unforgettable experience on a totally different level. We were using public transport, and witnessing the way Elijah dealt kindly with freaked-out people in the streets was astonishing. Under that huge fame there is a person so normal and without an ego. That must be a rare situation. To know such a person and become a friend was a good experience. It makes you question your own and others' unnecessary egos and bitterness. One funny moment was at Hagia Sophia, where I was taking Elijah, Zach and DJ Fitz’s photos. We were trying to be quick and avoid the attention when suddenly four tourists started to walk towards us. I finished the photo-shoot quickly, but they caught us. We thought they were going to ask for a photo together but instead they wanted Elijah and me to take their photo in that same spot. They didn't recognize him. That was a funny moment.

What is the situation like in Istanbul following the protests last year and the recent elections? Things have never settled down since last May when the protests started. Since then, it is like we’ve been watching an action TV series, never-ending, 24/7. It's a lot more interesting and addictive than most TV shows. It would take me pages and pages to explain the whole situation but it is overshadowing everything and this is tiring. For example, on the night of this book’s release party they banned Twitter, and suddenly the only topic was this. Until the elections, people were really restless and had some hope, but now it is deep sadness and silence. It is the first time in my life that I realize all around me young people are engaged with politics and are very unhappy.


"They came to Istanbul, where I live. I claimed this city is sad, they thought it is undeniably beautiful."

What does the government block on YouTube mean for the creative community in Turkey? The creative community is clever enough to change the DNS settings and go on YouTube. But it affects the people who earn money over YouTube, because it is legally blocked. But, to be honest, it is really embarrassing for us, especially when you think of Turkey’s reputation in the world. So nobody is actually proud of finding tricks and ways to go on YouTube.

What are you working on next? First of all I am planning an exhibition of the book here and outside of Turkey. Other than that, I have several projects that I want to focus on. One is the local band version of this book, but I do need some time for it. I also like shooting odd situations in nature, the city, funky buildings, trees. For example, I have one series called Tepeleme [which means "brimful], which is about weird shops or corners where objects are chucked on top of each other. Surprisingly they create a crazy visual mess. There is one other project about a car model that used to be popular thirty years ago everywhere in Turkey, but it is still very commonly used in a little town down south on the Mediterranean cost. It is a type of a Renault specially made for the Turkish market and named Toros, after the Mediterranean mountains. These cars were known for their excellent colors, ability to carry a lot of stuff and good engine for steep places. The farmers in the south would change their wives but not their Toros. It is that serious. The town is full of colorful and weirdly modified Toros cars. But in 2015, cars older than 30 years will be banned from traffic, so most of the guys will have to say goodbye to their good old friend. I am planning to finish this project around that time; hopefully it will be also a mini-video documentary too.

And finally, who should we be listening to from the Istanbul music scene? Maybe you are already aware of the old Turkish psych stuff which became quite known several years ago around the world. If not, I would recommend Grup Ses Beats’ mixes of those vibes; they are the best. I love what Tektosag Records do. They're an online label which has many good new artists. And I always recommend TSU! , Kim Ki O, Nekropsi and Baba Zula.

music / Hip-Hop
culture / Features
From Where I Am: Ten Years of Touring Musicians in Istanbul Documented