Read bonus cuts from our Lana Del Rey cover story, with Lana discussing her boyfriend, the recording of Ultraviolence and a hint at what might come next.

Read bonus cuts of our Q&A with Lana Del Rey

In an interview for the cover of our most recent issue (which, she told The FADER, was the longest interview she'd ever done), Lana Del Rey spoke on a number of important topics, including accusations against her of anti-feminism, a mystery illness that's been afflicting her and the toll that career criticism has taken on her personal life. But, as with any story, not everything can fit and certain interesting bits had to be edited out. Now, on the day of the release of her new album Ultraviolence, here are seven lucky seven bonus cuts, which find Lana discussing her relationship with her boyfriend, the spirited recording process for her sophomore album and a hint at what might come next.

On making videos and DIY…
“When I was 18, I got a MacBook for the first time, which kind of changed things for me because I could record myself singing on GarageBand and start using mixed media and found footage in iMovie. I just started downloading other people’s clips from YouTube and incorporating it with my own performance. It was a time when everyone was experimenting, because the internet was still so new. But things get exposed, don’t they? Everything that’s good and fun and DIY gets blown out of the water. That’s what I’ve learned. Even recording at home, recording by yourself. You lose momentum, and people aren’t as interested in the basement tapes or the home recordings, and you move on to working with other producers, elaborating on what you started with a DIY foundation. For me, it’s like an interesting trajectory going from doing everything myself to finding people who are a lot like me and who understood that songs weren’t just traditional pop songs, but more like a psychological unraveling of a life story in song form. You have to pick people who really get it.”

On her early career…
“I did seek an indie career. I was a huge fan of Cat Power. I still have never listened to pop music. You could ask me anything, I wouldn’t know who you were talking about. It just would never happen for me, it’s just not my thing. I like older music. I really like early ’90s stuff; I really like classic rock and late ’70s. The people I liked were Father John Misty, I love Cat Power. I was more indie-inclined. I wasn’t trying to be like, an indie whatever, but I was a fan of Lou Reed. I came to New York because of Dylan. I was a real writer, you know. I was writing short stories, submitting them. Doing poetry for fun."

On her boyfriend, Barrie-James O'Neill…
“I’m not engaged. I actually got a couple of phone calls, people saying ‘Oh, thanks for telling me.’ I was like, ‘You would know.’ But I got lucky with that one, because I had been very unlucky before. I met a person who was a much better person than I was, like had a lot of artistic integrity. He would really die before he sold out, you know. He was a lot like me, but even more strong. I would say, like, the way I would sum up his qualities at the time was he was very admirable. Even before things got bigger, I hadn’t met that many guys who understood or who were as passionate about the grunge era, or cult bands, cult movies, as I was. For me, it was a lifestyle and a way of life. Living off the grid was important to me, not having much to do with people I didn’t feel I had a lot in common with. He was exactly like that. He lived and made music in his own room for like, 10 years, and I totally related to him on that level.

“We’ve had a very tumultuous relationship. He’s a really dark character, and he has his own poetic process that’s way darker than mind, so as supportive as he has been, a lot of my energy has gone to making sure he’s in the right mindset, cause he’s really prone to long periods of quietness. He’ll go for a month being really quiet, and that’s just part of his process. I didn’t know that in the first year. But, you know, everyone’s kind of creative process is different and it changes, so, yeah. It’s been really up and down. He’ll tell you that too. Anyone who knows us, like, it’s really tumultuous. We have some different ideas about what we thing are like, credible and not credible. That can strain things. Like, he would never work with someone he thinks is an asshole, whereas if I think they’re talented but they are an asshole, I’ll probably still work with them.”

On recording Ultraviolence…
“I did everything alone with people I knew this time. Lee [Foster, the general manager of New York’s Electric Lady Studios], he’s been one of my good friends for the last 10 years. I came here for Christmas and he was just like, ‘You should come down.’ He let me stay in the studio alone for four weeks. I just hired a session guitarist and a session drummer. I produced it myself. I thought I was done, but then I met Dan Auerbach at a club. It was weird, because I wouldn’t normally work with someone I didn’t know, I’m just not in that place. He was really spontaneous. He was just like, ‘We should fly to Nashville and see if we can do it.’ So I flew there with him and we just took six additional weeks and kind of redid it with his best friends. And I loved it. It was the same songs, I just redid them.”


“I’m a big jazz aficionado. Hopefully my next foray will be into jazz.” 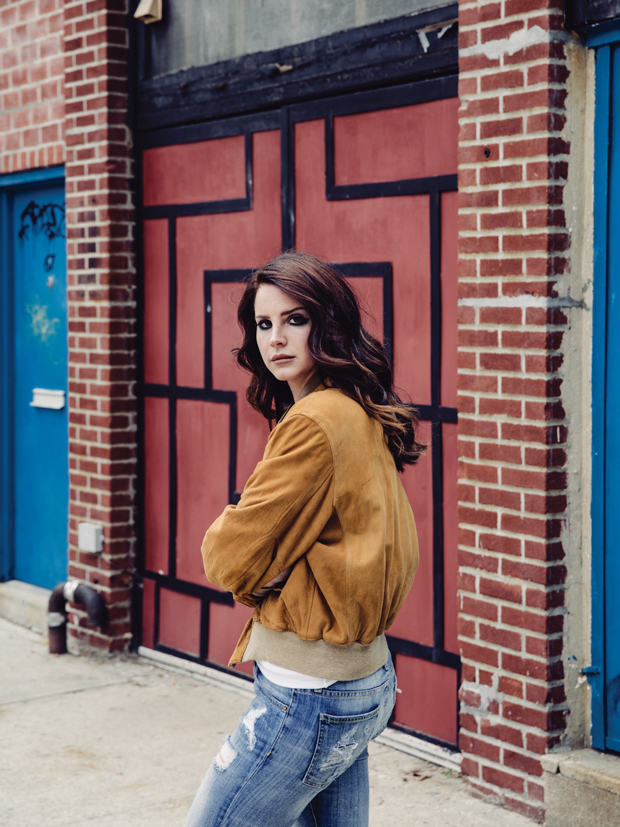 On the album’s more rock-oriented sound…
“I love rock & roll. But I love a lot of different genres. I like country, and I’m a big jazz aficionado. Hopefully my next foray will be into jazz. I feel like I’m getting there with songs like ‘Shades of Cool’ and ‘Cruel World’ and a cover of ‘The Other Woman’ by Nina Simone. I’m inching towards what I really love, which is kind of a Chet Baker, Nina Simone-inspired sound. It’s hard to get that sound because you need great jazz musicians. I really love Dan Auerbach. I really love him. He’s been an inspiration. The way he made me feel was really different than I’ve felt in a long time, just because he made me feel like I was just a regular girl that he wanted to work with, and that was refreshing. It wasn’t like I was a big artist and he was a big artist. Sometimes he was hot, sometimes he was cold, I was just like another chick to him. He was just gonna do this thing with his friends from Brooklyn down at his house in Nashville. It was a very grounding, but also very free experience.”

On mortality…
“I was always looking for a certain group of people who really, you know, had this looming concept of mortality that was always with them, who wanted to know where we came from and why we were here. That’s why I got into metaphysics and let that infuse my art, whether I was painting or singing or just writing for fun. I think if you’re not wondering why you’re here, then, you know, we would have nothing in common. Because I wonder. Like, we’re in Brooklyn and I love the houses, I love the people, but that’s not all there is to my daily experience. I have an inner questioning about what’s it all about. The big, big picture. I’m surprised whenever I don’t get that from people. I don’t know. Maybe because the world isn’t new anymore, you know, everything has sort of been done, and there’s not that many things to experiment with, there’s not that many outlets to try because they’ve all been tried. I think it’s just 2014, it’s a time to sit back and wonder what it’s all about. It’s not a novel question, you know, but it’s just one that I wonder about.”

On finding mainstream success…
“I mean, [success] hasn’t made me satisfied, obviously. Probably could have gone a different way, then I would have felt satisfied. I definitely don’t now. I don’t think anyone really would. It’s kind of the opposite of satisfied. Writing is satisfying. Writing the record, working with Dan. That’s where the satisfaction begins and ends. That problem is really beautiful and electric and exciting. But the stuff that comes with it is not that great, right?”