Interview: Future Talks Dancehall, Homesickness, and Getting Back in the Studio

After 45 days on the road, Future’s happy to be home.

After 45 days on the road, Future's glad to be home

A week or so ago, Future wrapped up his sprawling Honest tour. Presented by PUMA, it took him through 45 days of performing to noisy, riled-up crowds in dozens of cities and towns across the US (he even eventually ended up in Montego Bay for a massive dancehall party). Along the way, we posted some behind-the-scenes photos from his stops in Chicago, NYC, New Orleans and San Francisco. Now, freshly settled at home in Santa Monica, the Atlanta-bred warbler graciously took a few minutes to talk about the tour, hanging out with baby Future, and trying to catch a vibe in the studio.

I saw you were just in Jamaica for Sumfest. How was that? It was nice. I enjoyed myself out there. I love festivals. I’m getting into that this year. I didn’t get a chance to do a lot of festivals early on in my career. The vibe at Sumfest—it was super packed and humid—but the people were great. It was my first time performing in Jamaica. I got a great response from the crowd, I didn’t even expect for it to be like that ya know? I can’t wait to go and get back. They said they’re going to bring me [back] next year. I like dancehall and reggae. I like the melodies that they come up with, the meaning behind the songs—everything.

Would you ever consider making music like that? Yeah, of course. I was in talks of collaborating when I was over there with a few dancehall artists.

You just finished a pretty insane tour. Are you exhausted or what? I won’t say exhausted, but I’m most definitely tired. I’ve been on tour for 45 days and had to do a few dates right after the tour so it feels good to relax for just a second. You don’t even have time to get bored [on the road] because by the time you think about it, you’re traveling to the next city. It was back-to-back dates, we made sure we didn’t have too many days off so we could just get through it. There was so many cities that was wild, man—it was just a bunch of wild nights. There wasn't just one particular city that was better than anywhere else. It was a lot of energy the whole entire time.

Did any stops feel particularly special? Oh man, Texas. Anywhere in Texas stood out. It was very loud. It was loud in those places. Everywhere I went, the fans showed me so much love. Every single night— in North Carolina, Virginia, D.C., Baltimore—it was a lot of love everywhere that we went though. You know what I’m saying? 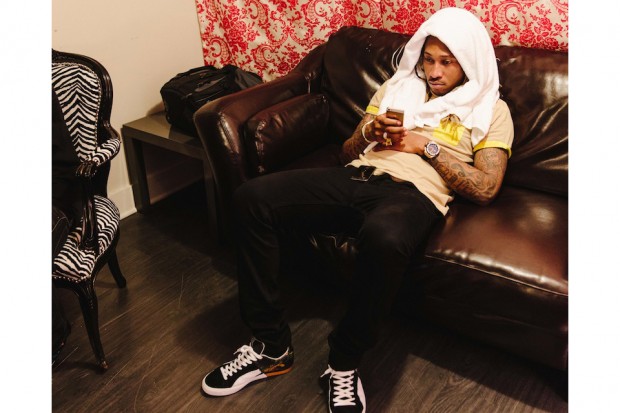 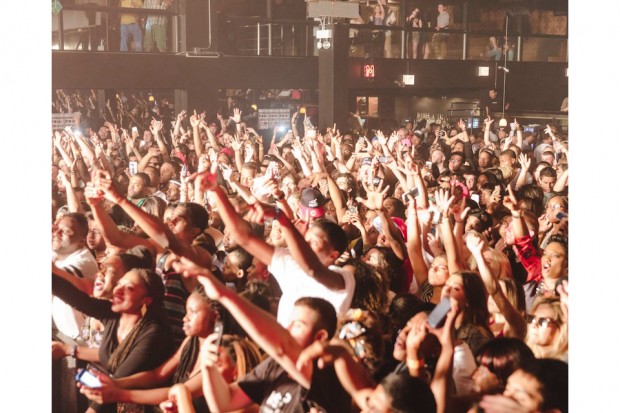 Did you anticipate “Move That Dope?” blowing up in the way that it did? I had a great feeling about it from the beginning. I knew it was a dope song. I knew it was different from anything on the radio at the time.

I’ve seen on your Instagram you’ve been wearing a bunch of different Pumas. Which ones do you like the best? The original Pumas—I love wearing those. And the Disc Pumas are one of my favorites, also.

You’ve been crazy busy, but what are your plans for following up Honest? I’m back working in the studio everyday. I’ve been working with Mike Will Made It, of course. I also got a chance to work in Canada when I was over there for a day. Me and Metro Boomin, we going to the studio this week. When I was back in Atlanta like last week, me and Mike Will went in for a day. I’m just trying to find time in between what I do, my busy schedule. Whenever I get some time to go into the studio, I’m working with Metro… I’m starting it off with Metro right now. Basically right now, I’m just trying to catch a vibe, not trying to take anything too serious. Just make great music and be creative, see what I can come up with. I don’t have anything in mind. I just want to try something new first and see where it takes me.

So was it was it difficult, on tour, being away for such a long time? Yeah man, super difficult to be away from family. You know, but you’ve got to make those sacrifices.

How’s baby Future? He’s doing good. We were just looking at TV together. For this interview, I had to put him in his swing for a second. Sometimes he can be quiet, like, right when we was just looking at TV he was quiet. He wasn’t saying too many things, just smilin. You talk to him, he smiles. I love it, he’s more aware and more alert now.

music / Hip-Hop
music / Features
Interview: Future Talks Dancehall, Homesickness, and Getting Back in the Studio