Around The World With A-Trak: Coachella

Coachella is a classy affair, my favorite music festival in America. I've played there a few times over the years: in 1999 with Q-Bert and Mixmaster Mike. In 2006 with Kanye. In 2008 with Kid Sister. But this year felt extra special. First of all because I was playing twice: solo and with Duck Sauce. And second, because Chromeo was also on the bill, so it was a family affair. It felt like the culmination of years of going there with various collaborators and eating the spicy pizza in the VIP tent.

We rented a lavish house with the Chromeo crew and a couple buddies, and next thing you know TMZ is talking about it. The owner of the house called me, concerned. We didn't actually have duck races in the pool as the article suggested. I hear those are illegal in certain states. 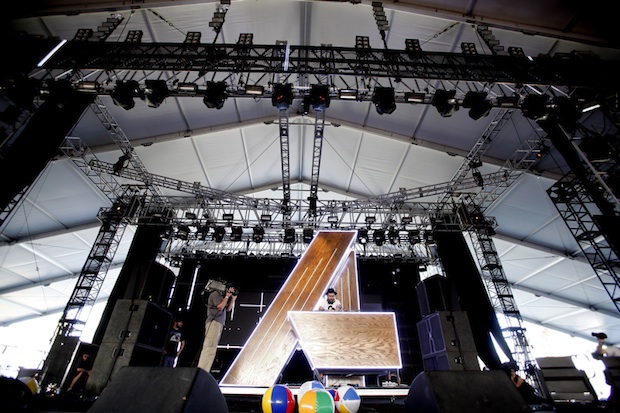 My solo performance was on Friday. I was premiering my new stage show, which is essentially a giant A that lights up. Oh, and it's made out of wood. But it's also quite high tech, developed by a company that also does Cirque Du Soleil shows. I'm starting a month-long tour across America now with the A, so Coachella was like the first show. Before that I was rehearsing up in Canada in some hangar far from everything where they also play Cosom hockey. Anyway, would you like to see some snippets of my performance? There is no risk of seizure in this video. Here, check it out:

It wasn't nighttime yet when I played and normally there's a lot of stuff going on with shadows, back lighting and whatnot, so in fact if you come see the show on one of the stops on the Magic 8-Ball Tour it'll be even more, how shall I say…theatrical. If you're into modernism and letters of the alphabet, come see for yourself, the full list of dates is here.


On Saturday I didn't go to the festival. We had a Fools Gold day party at some big villa with scantily clad people by a pool. I also had to go do some interviews with people who were wearing a bit more clothes than the aforementioned. Then we all reconvened at the house and fired up the BBQ for a lovely dinner with the equally lovely Solange Knowles as a guest of honor. Everyone except P-Thugg and I fell asleep under the stars, so the two of us went to a shindig later that night and people-watched. 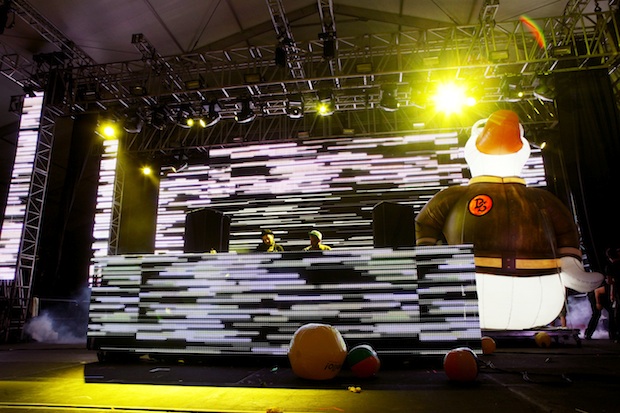 Sunday was Duck Sauce and Chromeo day. Duck Sauce performances are as rare as a comet. When we played EDC last year we had a giant inflatable duck built. For Coachella we felt like we had to take it further. So we made the duck light up. In practice that meant shoving some lights inside the duck. There's only one opening and it's the one by which it's inflated, which is, you guessed—the booty. We also got thousands of duck bill masks and threw them into the crowd. We played a whole bunch of new Duck Sauce material in our set. The tent was overflowing with people, I hadn't seen it that packed all weekend. And there was this sort of euphoric feeling all throughout. It was crazy seeing all these people wild out to essentially disco. Some kids in the audience brought their own inflatable ducks, too. Even Danny Devito got down, wearing the duck bill and dancing for TMZ. Two TMZ posts in a weekend, I don't know what's happening. 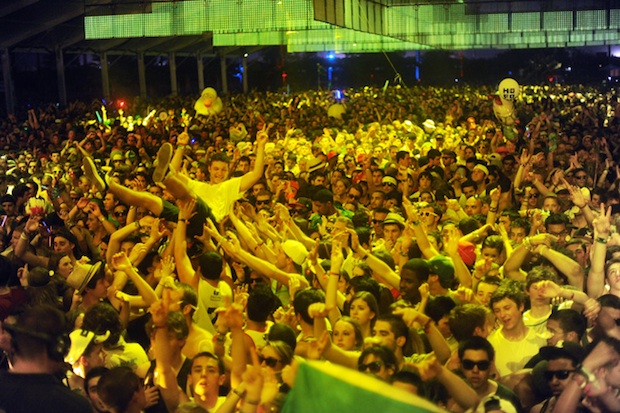 As soon as our set was over it was time for Chromeo. They played on one of the outdoor stages, the crowd was so big you could't even see the end. They were dressed as snazzy as always, my brother in a white suit and Pee looking like a mix between Idris Muhammad and Arsenio Hall. The set was streamed live on YouTube so a ton of people saw it. Ezra from Vampire Weekend joined them for a duet, the iTunes bonus track "I Could Be Wrong" and he played the saxophone like Bill Clinton via Bleeding Gums Murphy. Then when they played "Night By Night" they called me up for a collaboration in what I do best: to play the cowbell… Think "Honky Tonk Woman" meets "Hey Ladies".

Now I'm starting my tour, we're currently plowing through the South. You can check back here every week for more coverage, and there will be photo galleries updated many times a week. Lehgo. 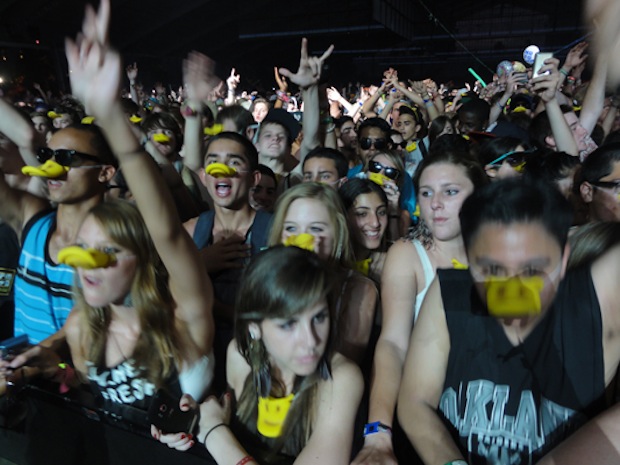 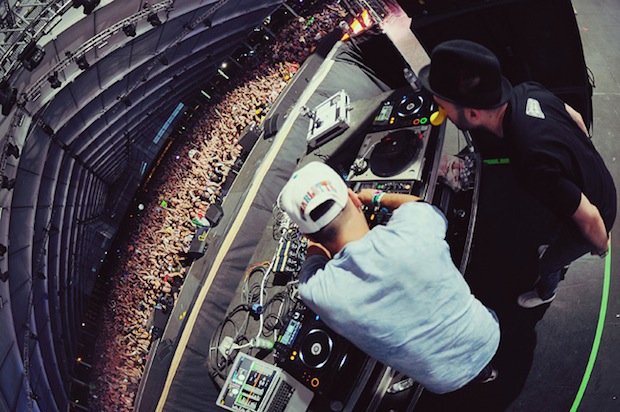 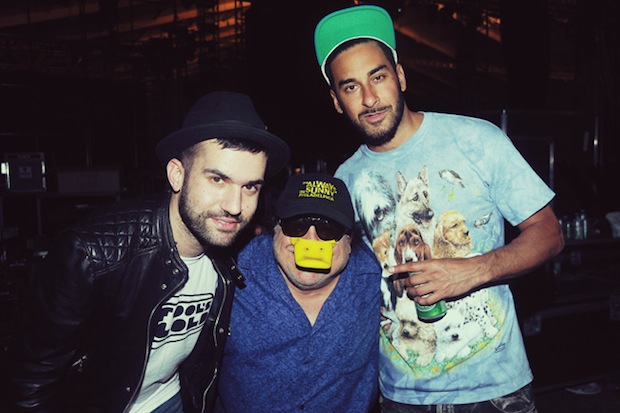 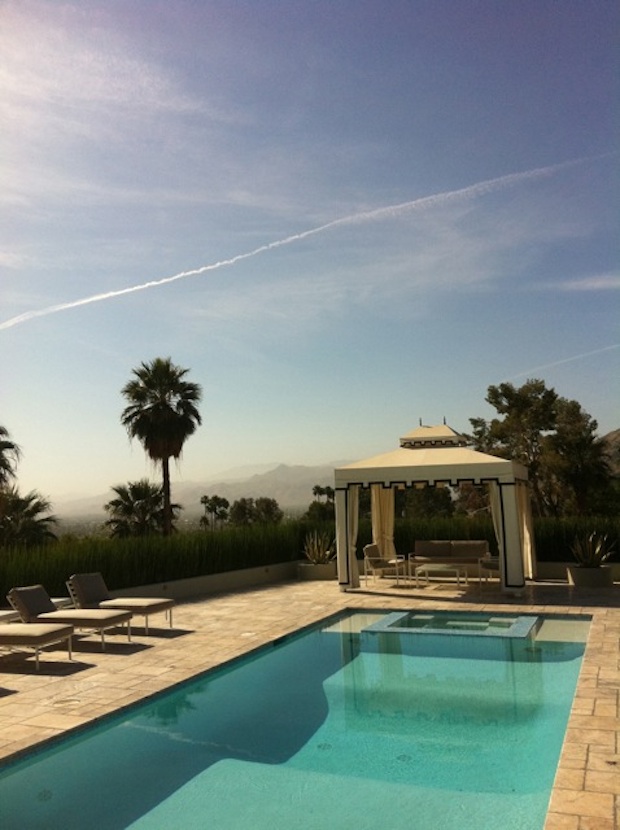 music / News
Around The World With A-Trak: Coachella