Since Sean Carlson launched the Fuck Yeah Fest (since tastefully neutered to its current acronym, FYF) as a one-night hardcore showcase at the Echo in 2004, the event has reached full bloom, relocating to LA State Historic Park to accommodate crowds of about 25,000 per day, teaming with Goldenvoice (the promoter behind Coachella) and expanding to a two-day, four-stage format that hosts dozens of acts, from comedians to DJs, and hardcore bands to electronic superstars. This is not to say that success has made FYF unrecognizable. If you squint, you can still detect the festival’s DIY punk-leaning roots in its lineup: acts such as the Vaselines, Refused, Redd Kross and Dinosaur Jr. draw a certain through line to the festival’s defiant early days. It’s one of the best festivals on the circuit, a smooth-running operation that emphasizes music over marketing, leisurely recreation over frenzied clusterfuck, natural drugs over synthetics. Basically, it’s the perfect bookend to summer.

The Vaselines took the stage Saturday as the sun descended, seemingly unperturbed by the Metro whizzing by 20 feet away. Frances McKee, Eugene Kelly and company gamely fended off assholic-dude shouts of “Go home!” by invoking a little mellowing psychedelia (“This is a song about going to a little island off the coast of Scotland and taking LSD,” explained McKee, before launching into “The Day I Turned Into a Horse”) and throwing the crowd some chum with their Nirvana source material (“Molly’s Lips,” “Jesus Wants Me for a Sunbeam”). On behalf of everyone else in LA: please, Vaselines, stay! 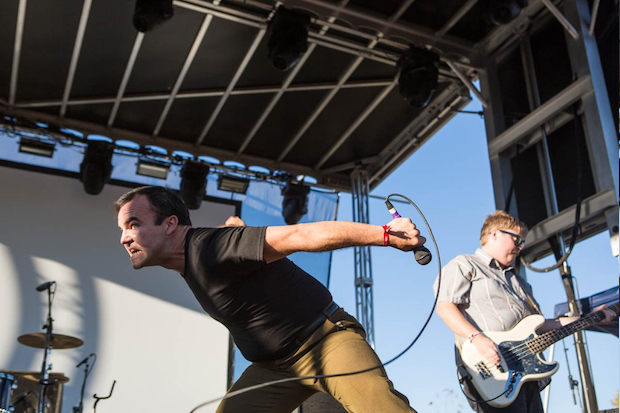 Award for most electrifying performance of the weekend arguably goes to Future Islands, though, thanks to Samuel T. Herring’s insane charisma and physical showmanship. He stalked the stage like a panther in heat, pushing his voice to plaintive, terrifying wails. "This isn’t not what you’re supposed to do at a festival, but we don’t give a fuck,” he said of their playing unfinished, untested songs. “This is testing grounds.” Reader, you must visualize: he was wearing a black T-shirt tucked in to army green pants.

Then we have Hot Snakes, the late, lamented post-hardcore project of Rick Froberg and John Reis (Pitchfork, Drive Like Jehu, Rocket From the Crypt), along to remind us that as long as you can see the bands of your adolescence play live, your adolescence lives on (see also: the enduring popularity of The Rolling Stones). Hot Snakes didn’t disappoint, playing a musical version of no-huddle offense, going song-to-song with aerobic momentum while barely acknowledging the crowd. 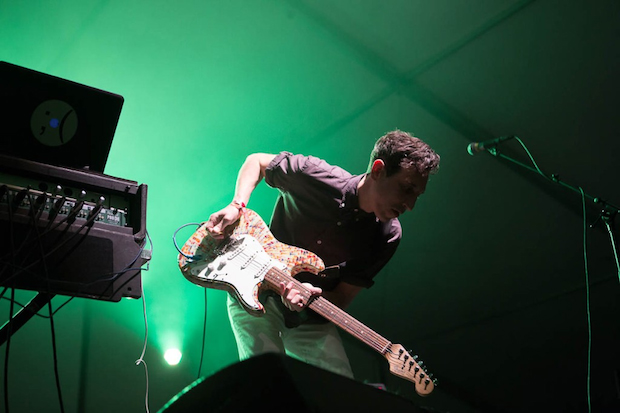 At night, the sound system for Tanlines’ percussive dance party momentarily overwhelmed adjacent act James Blake’s minimalist piano loveliness, an issue that was repeated on Sunday, when Nicolas Jaar’s low BPMs were initially lost between Desaparacidos’ and Health’s concurrent sets on either side. You kind of felt for these guys….but hey look! There’s John Mayer and Katy Perry watching M83!

By Sunday, the park had been pounded to dust, which swirled in great gusts as the festival population migrated from stage to stage. People tied bandannas over their noses and mouths, the FYF version of the vigilant, bemasked Asian women in many an urban metropolis.

There’s not much new to say about Dinosaur Jr., but they’re freaking beasts. Whatever personal cobwebs or internal strife existed between Mascis and Barlow after the breakup has long been paved over. Or maybe their lawyers were just offstage, furiously BlackBerrying. Either way, we bow in deference to the raw gods. Afterward, there was an exodus toward the small stage, where the Liars had snazzied up in black and white suits for the occasion (they clean up nicely). The Santa Clarita natives treated us to a sampler of electronic chamber gloom from WXIXW, an elegant clash with the neon pink sunset-streaked backdrop. 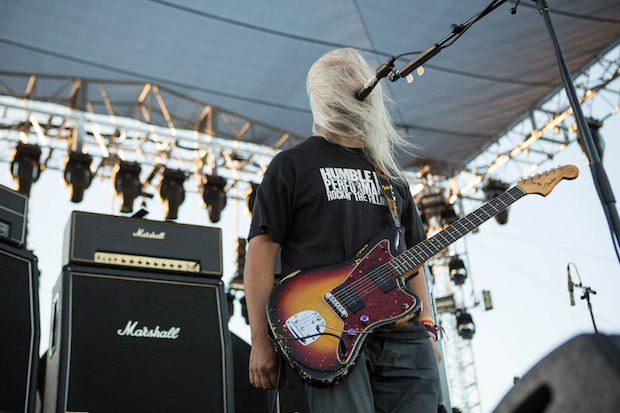 Finally, we made the pilgrimage to the tent for Nicolas Jaar, where a kid with a flower headband asked for a light and then fired the wrong end of his cigarette. “I’m on acid,” he shrugged, and danced off. Jaar and company (two dudes, some laptops, a saxophone) started out gentle and eerie, then built lounge-like momentum. Apparently, this wasn’t for everyone. “I’ve read so much about this guy: that he’s young, he’s a producer, he’s the next thing, but it’s so slow!” griped some yahoo (loudly). “I don’t get it.” Nevermind: the overflowing army of golden children beaming on the dancefloor begged to differ.