Chicago's most dedicated journalist reflects on 20 years of reporting on

the effects of violence in the city he loves.

For the past 20 years, Alex Kotlowitz has been reporting on why young people in Chicago shoot each other. There’s no one reason, but he’s investigated any and all possible: poverty, lack of adult role models, the prevalence of guns, a crumbling infrastructure. In his landmark 1991 book There Are No Children Here, he tells the story of two brothers, Lafayette and Pharoah Rivers, who were growing up amidst ceaseless violence. Unfortunately, for the majority of the people living in the South and West Side neighborhoods of Chicago, this is still the story. And Kotlowitz has continued telling it regularly, from his 2011 documentary The Interrupters, about the efforts of former gang members to stop violence on the street, to the radio show This American Life, which, over two intense episodes this past winter, found Kotlowitz embedded in the guidance department of Harper High, a school in the city’s crime-ridden Englewood neighborhood. To find some wider context for what is happening on the ground in Chicago, and how to stop it, we asked him what’s going on.

What’s changed since you first began reporting? I would say one thing that’s changed considerably since There Are No Children Here are the gangs, I was speaking primarily to the African-American gangs, and at the time they were really well organized, very hierarchical, deeply involved in the drug trade. Virtually everything revolved around the drug trade, so whatever violence there was, was usually over turf to sell drugs, and that’s changed. Those gangs have completely fallen apart, in large part because many of their leaders have been put in prison. Now, what you see—and I saw this when I was working on The Interrupters, and then on [This American Life]—are what the kids call “cliques”: it’s really just a group of kids, a band of kids from one block fighting a group from another block over virtually nothing. You go back and people can’t even remember the kernel of the dispute that’s erupted into them shooting each other.

So how do you stop gun violence? It’s the question that we all ask ourselves. One of the things that is distressing is that you spend time in communities that are deeply affected by violence and you see a kind of resignation, a sense that this is the way things are, and we need to just figure out a way to navigate our way through this world. But the truth of the matter is [that] I usually come away kind of uplifted, if not inspired, because I find people who are somehow managing to stay erect while everything around them is slumping. And so in these people I always see this sense of promise, this light. So look, the first thing you have to recognize and acknowledge—and it seems so self-evident that we stop talking about it—is that the bulk of the violence in our cities takes place in really deeply impoverished communities, places where the poverty is so profound it’s moved from generation to generation. These are communities where I would argue that the window of opportunity has narrowed and not widened. I think we need to figure out ways to rebuild and fortify these communities. Schools, traditionally this transformative institution in kids’ lives, have for many lost that effect. We’ve got to figure out ways to make our schools work. If you would have asked me a couple of years ago about gun control, I would have told you that in theory it sounds great, but it feels to me like it’s the last thing we should worry about given the number of guns out there anyway. There are reasons why people are shooting each other that have nothing to do with availability of guns, and everything to do with growing up in incredible distress and despair. There are kids who have no sense of a future, and that speaks volumes to how we completely abandon those on the very bottom. 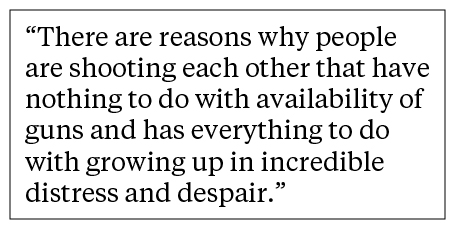 Finally, we’ve got to have programs that bring adults into the lives of these kids. If for whatever reason their families have crumbled under the weight of all that’s bearing down on them, let’s find a way to have adults in their lives that can help guide them. Maybe that’s a mentoring program, maybe that’s in school, maybe it’s through other means. 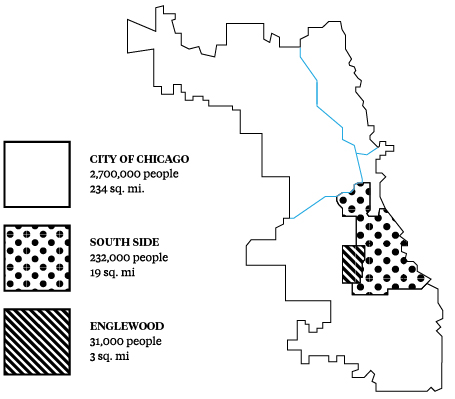 Why is it so hard to get young people talking about the trauma they’ve experienced? When I was spending time [for This American Life] with Thomas, the young man who witnessed all those shootings, I was there in the social workers’ office with him and Anita, the social worker who works with him a lot. I had my microphone out and was talking to Thomas, he would tell me things and Anita would say, Thomas, you never told me that. And it was clear that even having someone like Anita who’s trained at trying to get Thomas to talk, there was still so much more on this kid’s mind that was really weighing on him. I think the kids are often just discouraged from talking about what they’ve witnessed out of fear that if they do, they are somehow going to be held culpable for the crime. I see that all the time. They don’t want to talk about something because they don’t want to get involved, and really what they’re saying is, I don’t want people thinking I had anything to do with this. And there’s also this fear that if you’ve witnessed an act of violence, someone is going to come after you because you might be called on to testify, which is often why people don’t talk to the police. It has nothing to do with whether people trust the police; it has everything to do with the fact that they live in that community—they are going to be living in that community before and after the trial and they are afraid for their safety, understandably.

Is the school there to foster dialogue about day-to-day life? Or is it there primarily to facilitate learning? Can those two things work hand-in-hand? I would argue that at the end of the day, school is about reading, writing and arithmetic—what we know and understand schools to be. A school is supposed to be this transcendent institution that can be transformative in people’s lives, a place that can lift you in ways that nothing else can. Public education is all about the myth of this kind of meritocracy in America. So I think the real question is, at a school like Harper, what do you have to do to allow that to happen, allow that to flourish? And I think part of what was clear to us, when you spend time at the school, was that you could see all that was weighing down on the shoulders of these kids, you saw all that they brought into that building. So in order for them to learn, they have to have all these other resources available to them. You have to have all this other support and guidance, and that, in some ways, is certainly what I saw in the social work office. The other thing is that these are places that [need to] feel safe, feel nurturing, places where there’s some sense of hope. Somebody like Thomas, despite everything he’s witnessed, here he is coming to school, virtually every day. Why not have these schools open in the afternoons and evenings for kids to come and do homework, for tutoring, for mentoring, for healthcare?

Has Rahm Emanuel had any effect on the violence as mayor? It’s a little hard to tell, in part because it’s still early. I’ve been around Emanuel when he’s talked about the violence, and I don’t know him well enough personally to know this for certain, but I sense that it really affects him. I remember once hearing him talk about coming back from the South Side about a year ago, and talking to some kids there and trying to make sense of the madness. Last year we had a spike in homicides, and his initial response was mostly about policing, and I think in the past couple of months he’s started to rethink. He’s invested in after-school and mentoring programs. He’s put together an initiative to raise, I believe, $50 million from private businesses for programs that would help bring adults into the lives of these kids, that would find ways to give them some measure of support. So we’ll see. You know, with any mayor of a city like Chicago, there’s some self-interest. You don’t want a city to be defined by the violence; it’s unhealthy for the culture and the economy of a place in a very sort of practical way. And then, of course, there’s just immeasurable human loss.

Does Chicago as a whole feel like it’s defined by the shootings, or does it vary from neighborhood to neighborhood? Well, the shootings are in a very concentrated part of the city, mostly in the South and West sides. It’s very easy to live in the city and not be at all personally affected by the violence. In other words, when people think of Chicago, the first thing they think about is the violence, and you don’t want that. I mean, I can understand if you’re the mayor of the city, that’s the last thing you want. I just want to underscore one thing though: Chicago is bad, it’s really bad, but I don’t think it’s even [in] the top 15 of the most violent cities in the country. So I just want to underscore that we are by no means alone. We tend to get a lot of attention for it. In part, for reasons I don’t understand, we tend to be the epicenter for these horrific murders of children. But we are not by any means alone.