A Home Away: 12 Artists’ Favorite Places to Let Loose

I was in elementary school when Cheers went off the air. I remember it was a big deal, but my parents weren’t big drinkers, so it wasn’t until college that I began to understand the importance of bars—of having a “third place,” somewhere neither work nor home “where everybody knows your name.” Cheers showed the classic American third place, somewhere without the pressures of office or family, its bias solidly slanted your way. Most musicians are already living an alternative to the nine-to-five lifestyle, but may find the studio, tour bus or backstage to be as oppressive as a cubicle. We talked to 12 of them about where they go to get away. —MATTHEW SCHNIPPER
Kurt Vile

I stay in the same little cove in Rincón, Puerto Rico with my family all the time. It’s a really beautiful, mountainous landscape with a nice view and amazing flowers everywhere. Perfect isolation. There are a lot of cows. My wife, Suzanne, found it in 2005. Now we go there with our daughters, Awilda and Delphine. It’s a well-known surfing beach, but I don’t surf. We used to explore the beaches, but truthfully they’re a little bit dirty, so now we play in the pool, read with the kids or cook food all day. There’s so much wide-open space around you and incredible colors, you just know you’re away. It’s quiet and peaceful and warm, and at night the sky turns purple and red and on fire.

There’s this one restaurant down the street [from my house]. It’s not even a restaurant really, it’s like a bodega or deli or whatever. I think it’s a drug front. I’ll leave the name out, but it’s up in Montreal. It’s all these old Jamaican guys that work in there and they sell weed and I think they are kind of tripped-out that I come in there and order. They make rotis and they are really good. It’s kind of funny to them, cause I never buy weed cause I don’t really smoke weed and I always want to eat in there. They have these huge flat-screen TVs and you can tell it’s not a real operating business cause they have maybe a tube of toothpaste, maybe a roll of toilet paper, and they have all these Star Wars action figures that are off limits—you can’t buy them. But I sit right by the fish tank and eat my roti. They have a rap magazine about the 100 best tracks from 1992 to like, 2000 or something, so I’ve been making my way through that. That’s the one place where I just turn it all off.

I got a gym in my building, like a real deal basketball court. I brought a bunch of my homeboys and we just ran five-on-five. I think it just reminds me of when shit was regular. I’m not J. Cole, there’s no fans—it just reminds me of what I grew up doing. I guess that’s what it is now, but it’s always been a place to just get my mind off everything. No matter what’s going on, the only thing you think about is the game. My worst fear is being that 30-something-year-old that can’t play no more, who just fell off completely and is always talking about how good he used to be. I want to have kids and be that parent that can really play. I still want to be able to dunk when I’m in my late 30s. I want to be good forever.

The one place that’s close to me and where I feel at peace and where I visit to clear my mind and get back to reality is my grandpop’s house in Chicago, up on 109th. It’s a red brick house, two stories. Growing up, it was everything, but when you go inside, there’s not too much to it. We use a computer screen for the TV, the same old furniture from my grandmom’s dad. It has an empty basement that flooded all the damn time, where me and my mom and my sisters stayed when I was younger. Across the street is the neighborhood park, and despite all the violence going on right up the block, I was able to brush up on my hoop skills. When I go back now, I can still take over that court. I’ll be there this week to holler at my grandpops. He’s a cool dude, going on 80, and he’s always been a grinder. He’s a coach bus driver, so he’s always on the road, like me, and we can connect on that.

I have a Mercedes and I’m about to get a Range Rover, which I’m excited about, but even when I had the Civic, the car was the ultimate place to test new music I was making. If there was ever any bullshit, taking a long-ass drive and smoking cigarettes—it’s liberating. Especially in LA, it might be half an hour to get somewhere, so you get a chance to put your phone away and listen to music. When I’m in Pittsburgh, it’s my way of seeing the city again, driving out from the tunnel and all my childhood places. I definitely smoke weed in the car. When I get really high, I drive incredibly slow and think every single car is a cop, so depending on my comfort level, I might not. But if I’m not the person driving, it’s on. I remember when the first homie got a car, our nights used to be driving around for hours, smoking weed and listening to music. Now, it’s one of the only times I get to be by myself. 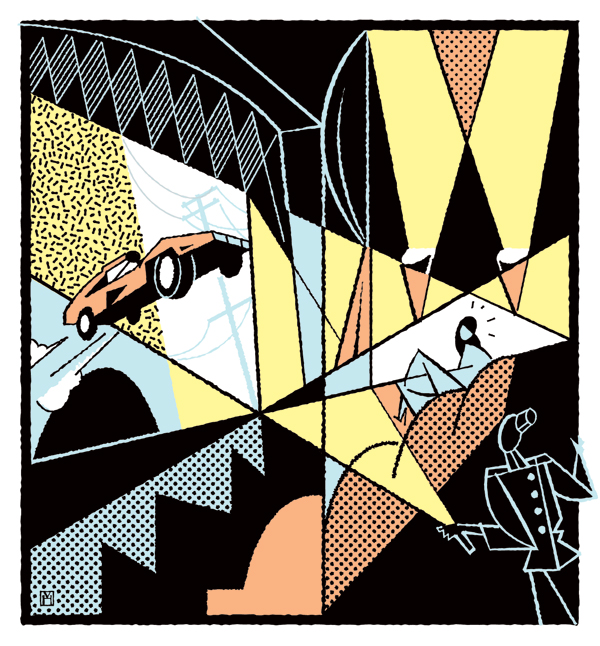 I go to the movies a lot by myself, which is weird, but it’s my own time to zone out, escape and just kind of lose myself. I have a short attention span, and one of the few things that can keep my attention for a long time is a movie. Action-packed movies and sci-fi fantasy films are my favorites. I don’t like scary movies. I’m a spiritual person and a dreamer. The things that I watch and the energies that I absorb throughout the day haunt me in my dreams. So chances are I’m going to have a nightmare.

Since I started commuting 50 minutes south to Silicon Valley every day, I‘ve spent most of my time either in my small San Francisco apartment, on campus or in my car. I’ve thought a lot about the interior of my car as both a private and a public space and written music speciﬁcally for my Toyota Matrix. Driving on the highway feels like an exploded social experience—spread apart and sped up, with everyone wearing complicated exteriors that keep us further away from each other. Communication is simpliﬁed into symbols and gestures. All the while, each person is sharing a visual landscape and experiencing an entirely different sonic environment.

I been going to Tootsie’s, probably about five years. We’re talking about Tootsie’s in Miami. It’s like, palm trees on the inside. It looks like a casino or a club. I like it because you can go in there and chill, see the prettiest women from all different walks of life. It’s a melting pot, you know? They got good food and they got pool tables in there. So I can just go in there and shoot pool and kick it with the pretty ladies. I’m very nice at pool. I got this little inside joke with pool, you know, every time I win, whoever I beat I be like, “Man, welcome to Iraq. Cause I-ran the table, and now you in I-rack.”

The Woodser was a venue, but it was like a house venue. It’s been around for years and it was one of the first DIY venues in Williamsburg, and everyone’s played there: the Yeah Yeah Yeahs, TV on the Radio. My first band played there. But it was funny, because I stayed there the first time I had ever been to New York, and then weirdly enough because there had been friends living there, I was eventually able to move in. So many musicians have lived there. I lived in the back room. They started major condo construction in the backyard and the construction starts at 7AM and I had to move out. So I don’t live there anymore, but I still try to go there as often as I can.

I kick it on Fairfax at the Odd Future store a lot. The OF store is stupid, we sell shitty clothes. There’s a bunch of kids there and a bunch of skateboards. I don’t like to talk about it because people will come there and lurk and it won’t be as fun for us. Sagan [Lockhart]’s there; he has the best videos on his phone. We just go back and forth across the street and annoy the people who work at the stores. I don’t have anywhere else to go. I don’t hang out at [my manager] Clancy’s house much cause he has a dog there and I’m allergic, like really bad. I don’t like being inside. I like fresh air. 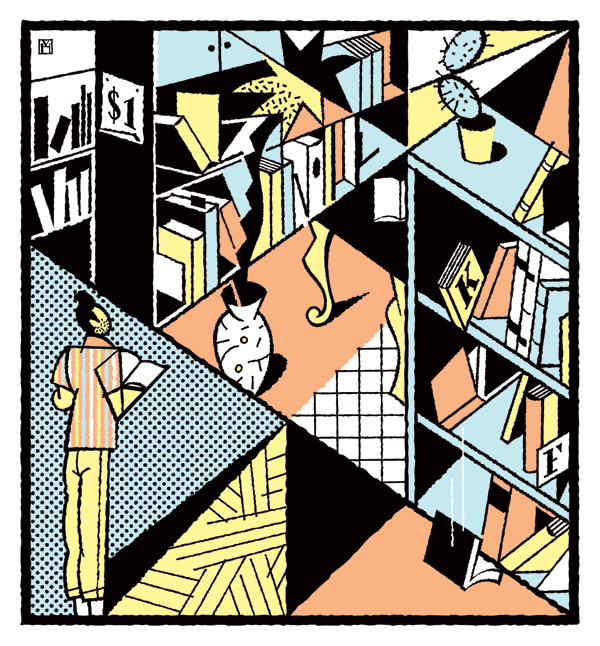 The upstairs section of The Last Bookstore in downtown Los Angeles is the place I go to relax and get away from it all. Bookstores evoke personal nostalgia and this particular store reminds me of a childhood dream. I am not going to pretend that I read nearly as much as I’d like to, but there is something special about being there. With so many bookstores closing down, it’s encouraging that The Last Bookstore seems to be thriving without sacrificing its integrity or independence. Beautiful book art, a hidden yarn store and various art studios all make up the otherworldly vibe. The downstairs is often busy, but not many people make it up to the magical second floor, where the books cost one dollar. It’s hard to describe the space without seeing it for yourself, so do yourself a favor and visit next time you are in LA, even if you prefer Twitter to books. Oh, and they also sell records.

I love GameStop. I go to the GameStop anywhere that they got a GameStop at. They have great customer service. I go see what’s new and then I call my son to see if he wants anything and get that for him. I just like the atmosphere. You don’t have to be a gangster and you don’t have to be rich to walk into a GameStop. You just have to be yourself. I walk in there with my flip-flops and T-Shirt on. People don’t even recognize who I am, and that’s perfect for me. I’m an avid video gamer. I’m coming out with my own video game controller this year, called Prestige. They’re gonna be top of the line controllers: ones that can break, ones made of glass, ones made of Swarovski crystals, ones made of wood. The possibilities are endless.