The 23-year-old street dancer from Soweto is disproving that notion of a “normal” career and cultivating a style that’s unmistakably her own.

The Krump Queen Speaks Her Mind

Presented by Sprite and FADER, Obey You Collective: South Africa is a series devoted to showcasing artists, trail-blazers, and bright young talents from South Africa. For this installment, we spoke with one of the country's most driven street dancers, Tarryn Alberts.

Dancing is Tarryn Alberts' full-time job. "If you don’t work the normal 9 to 5 job, then you can’t look after yourself — that’s how it's portrayed," Alberts says over the phone from the streets of Johannesburg while commuting to her dance studio, not too far from the Eldorado Park neighborhood in Soweto that she calls home. The 23-year-old is disproving that notion of a "normal" career by spending long, ten-hour days days rehearsing for performances, shooting music videos, saying, "This is my job," and cultivating a style that's unmistakably her own. Her motivation has certainly paid off; in 2010 she was named Krump Queen, she's toured Europe as a backup dancer, and this coming weekend she'll open for Kendrick Lamar at Miller Boomtown, the rapper's three day mini-tour of South Africa. When she speaks it's with an almost tangible optimism, like there's not a problem in the world that can't be solved by the right song, or the perfect dance move. I spoke with Alberts about dance battles, touring with Die Antwoord, and why she'll never change her look—for anyone.

You’re performing with Kendrick Lamar this weekend. How did that come about? I know the guy that was looking for all the dancers, I knew him from when I won Krump Queen in 2010. He saw my performance and he was impressed, so he booked the gig. I guess it was a hook-up; someone knew someone.

What’s the contemporary dance scene like in Johannesburg? The dance scene in Jo’burg has grown rapidly over the past two years. It’s been there for a while, but we still consider it a baby. We try to feature in a lot of music videos because we want dance to be out there, we want kids to see it, and most of the time that’s the only way they get to. The battle scene is also very big now. A lot of dancers in South Africa actually want to go the World Championship that happens in March of every year. It’s an annual thing; many dancers all over SA come to Johannesburg or fly down to Cape Town to battle, and hope they can go through to the next round and compete with other dancers around the world.

You’ve entered—and won—a lot of competitions. What do you take away from those experiences? I think competing is for respect. That’s something we always want as dancers, especially when you’re out in the battlefield. Also, it helps to maintain my dancing: always being on point, always rehearsing, always being at certain places on time.

Can you tell me about your dance crew, V.I.N.T.A.G.E? We’re a waacking and vogueing crew, but we do all styles of dancing. Our crew started in 2011, and basically since then we’ve tried to take over the dance scene in South Africa. We mash up fashion with our dance and we’ve created a style that will be always remembered, something that’s timeless. We’ve taken videos to another level; we shoot our own stuff, and we don’t have any cameramen or anyone in editing helping us. We do our own work and we answer our own phone calls. In high school we were the bullied kids. When I was in high school, people were really mean. Girls were really mean. Now kids look at us and they’re like, “Oh you guys are the cool kids. We want to dress like you. We want to do stuff like you.” And I’m like, “What?”

Is it challenging doing everything on your own? For me, what’s challenging is transport. Like, I have to go to rehearsal now, be there until 11:00, and then hope to make a plan to get home. We don’t have underground trains to drop us close to home or buses that are 24/7. Sometimes it prevents me from doing certain gigs. Mostly I just take public transport so I can rely on myself and don’t have to put anyone else under pressure. 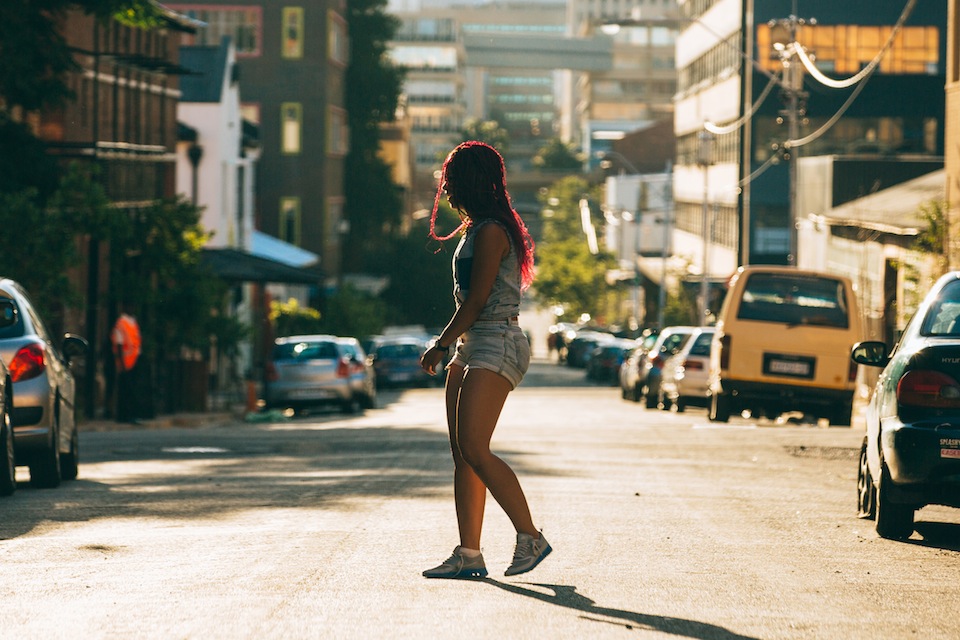 "In high school we were the bullied kids. Now kids look at us like, 'We want to do stuff like you.'"

Over the summer you and Manthe Ribane (from V.I.N.T.A.G.E) went on tour with Die Antwoord as backup dancers. How was that? Working with Die Antwoord has been amazing. I learned so much from Ninja and Yolandi, they were like mentors to us. They just took our mind to another level. They’re about art, and they love what they do so much. Traveling with them was amazing for me because I grew as an individual, not only as a dancer. It helped me open my mind and realize the world is so much bigger than we think it is.

What's your personal style like? A few months ago I cut my hair, so my style has totally changed. I finally feel comfortable — comfortable in heels, comfortable in sneakers, jeans, high waisted mini-shorts, whatever. My style is chill; right now I’m in jeans and a T-shirt on my way to rehearsal. When I get to dress up I like to look grungy, or sometimes elegant, depending on how I feel. Sometimes I can’t do certain things because I’m too “boyish.” I was told by a magazine not too long ago, “Can we have more picture of Tarryn looking girly?” And I was like, “What does that even mean?” I don’t stand for it. I’m sorry, but I’m not going to conform to anything.

You choreographed an original dance for the Obey You Collective: South Africa series. What kept you inspired while working on it? The piece comes from a sad place, actually. I got the song from the director and he’s like, “Listen to it.” When I start to create a piece I stop watching TV, I stop listening to radio. I try to, like, almost go on a fast. I draw inspiration from certain things, like watching kids dance randomly in the street, listening to certain sounds, whatever. With dancers, I think we naturally have this ability to see pictures when we hear music. At the time I was so confused and so down, and when I heard this song, it was like I put all of my fear into the dance and just let it go. It’s like dance therapy.

What excites you about youth culture in South Africa right now? A lot of kids are pushing their own brands, saying, “This is what I stand for.” It’s about being free with who you are, pushing your dreams and chasing goals. A lot of children finish school and they actually feel like, “I can do that thing I’ve always wanted to do.” You have so many kids that are from the ‘born free’ generation, like they weren’t born in apartheid. They have the opportunity to go and study after school, something my parents couldn’t do. They have the opportunity now to earn a living doing promotions, making t-shirts and selling them, doing whatever. I think that’s something that has become big in the last five years — young people doing something for themselves.

Other than dancing, what occupies your time? I’m done with school, I studied media studies for three years. I’m already a grown ass woman. So I guess it’s just dancing for now.