FEATURE: BLK JKS Are Out to Map the African Brain or Kill the Patient Trying

It’s a superficial thing, and at this point probably more curse than blessing, but the first thing that hits you about the South African dub metal quartet BLK JKS is their look. There’s a certain afropunk unity to their style that makes them seem like a movement unto themselves, yet even more striking is how strong a presence each member has, pulling away from that center in his own direction. There’s guitarist Mpumi Mcata, reggae star handsome in his ’80s Black Uhuru wears. Tshepang Ramoba, with drummer’s arms and those thick baobab dreads. The bassist, Molefi Makananise, with his professorial air and the ubiquitous kwaito-style sporty (pronounced “spotty”) on his head. And then there’s Linda Buthelezi, the frontman: shirt buttoned all the way up and thick glasses sitting heavily on his babyface. He looks tight-laced and intellectual in a young Dr Frankenstein kind of way, so that even when he’s quiet you can sense a tortured side that’s got to come out—if not in music, then somewhere.


If you can see it, then A&Rs can definitely see it, and perhaps not surprisingly, BLK JKS (pronounced “black jacks”) are something of a hot property lately. The vapors started with a self-titled EP pressed up for their birthday gig at the Apartheid Museum in a Johannesburg theme park called Gold Reef City two years ago. Those five songs floated around the web for a minute, ultimately turning up as a limited edition CD in certain stores in London and New York last June. It’s a heavy collection. “Lakeside” starts the set with a minor-keyed “House of the Rising Sun” intro that leads into grungy dub, Mcata’s rhythm guitar turning over on itself in the mix as Buthelezi moans ominously about paramedics and broken lesions. Just when you give up on deciphering this pseudo-medical diatribe, he breaks into a Zulu jive falsetto and the beat morphs into something like ska, the guitar changing into finely-worked Ernest Ranglin trills. “UmZabalazo” is an echoey mosh pit interpretation of a toyi-toyi, an anti-Apartheid protest chant based on the vocalized sound of AK-47s. If it doesn’t exactly celebrate the possibility of black fascism implicit in those war cries, then it doesn’t blink at the idea either. You can imagine antecedents to their sound if you try—the nya-rock of Cymande, maybe Fishbone if they broke through their surf metal conceits into something deeper, more afrogothic—but you’d more likely extrapolate the existence of an unknown black planet to explain BLK JKS’ origin. That sense of something new has hovered around them since their very first gig—a club rehearsal that turned into a show as on-lookers gathered. The immediate word of mouth about those black dudes that play that weird music underscores how desperately South Africa—or at least its all-white indie rock scene—needed that something. 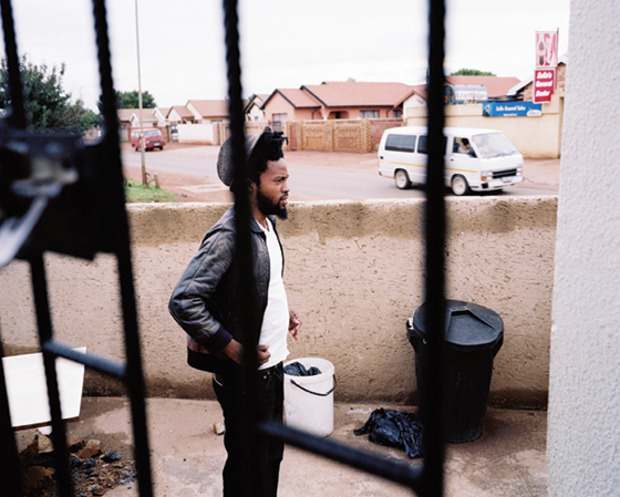 Those expectations, and the look that so effortlessly embodies them, are BLK JKS main problems these days. “We’ve met with most of the majors in SA, they come to us like, ‘Black rock band, sign them and make a lot of money.’ Then they find out we’re crazy,” explains Mcata, sitting in a café in Melville, a suburb of Johannesburg that’s painted a Martian purple by the Jacaranda trees blooming everywhere in the November spring. Mcata is clearly the spokesman and all-around conceptualizer for the Jacks, to such an extent his credits in the liner notes could easily read, “Mpumi Mcata: Rhythm Guitar/Minister of Propaganda.” Buthelezi, the vocalist and main lyricist is actually the least vocal of the four. These two form the original core of the group, having grown up together in a section of East Rand called Spruitview. BLK JKS was formed when Buthelezi and Mcata brought on more experienced musicians Makananise and Ramoba, both from Soweto, to form the rhythm section.

The insanity charge Mcata mentions may not be totally unfounded. The main result of the Jacks’ initial buzz was a chance to start recording at SABC—the country’s biggest and best-equipped studio, housed beneath a corporate tower that dominates, no, intimidates Jo’burg’s skyline. Those sessions became the unedited masters of an LP project titled After Robots (in SA, traffic lights are called robots. Nobody knows why). Nominally a sort of rock opera built around a surreal Mulholland Drive-esque trip through the city, the music is nebulous, sprawling and psychedelic, the narrative often seeming like a pretext for long, winding jams full of that one mind, four directions dynamic. “It’s better when we’re not on the same page,” says Mcata. “On those masters, there’s parts where we play for like 35 minutes of not listening to each other. Like, Molefi’s checking the tone on his bass, and just so that it doesn’t make you physically sick, I’m checking in the same key. Tshepang is doing his thing on the drum, getting everything set up, and basically what you hear is the most beautiful thing.”

Like the jams, the conversation in the café tends to drift, meandering through church choirs, the Mars Volta, Boyz II Men, Tortoise, Cameroonian bassist Richard Bona, Jack Dejohnette, Canadian psyche and luminaries mostly unknown outside of SA like Vusi Mahlasela and Busi Mhlongo. Trying to wrap his tongue around the role that influences play in the Jacks’ sound, Makananise gets a little worked up, “We’re listening to all different stuff, but the first time we played together I was like, ‘Yeah! Shit like this exists!’ Yes, but no…it’s something quite hard, to be fair. I never seen that, to be honest…” And then he lapses into silence, defeated by what he is trying to express. He’s more comfortable talking formally about the music, which makes sense, since it is his session bassist-ability to play comfortably in many different styles that holds the schizophrenia together. 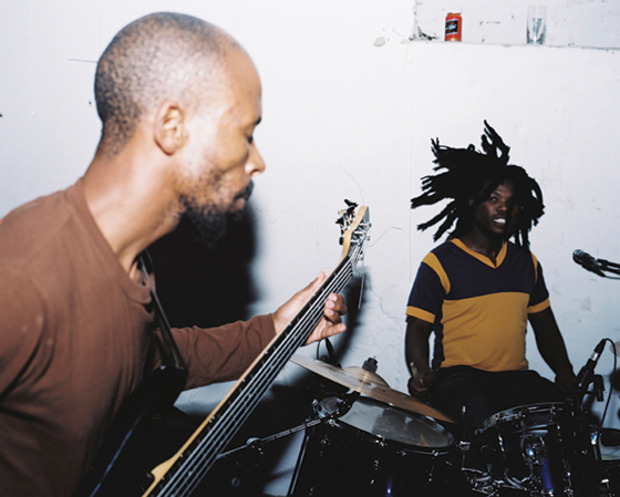 In a way, the secret ingredient of BLK JKS’ sound is the long and venerable tradition of township jazz that pervades the musicianship of Makananise and Ramoba. As Makananise says, “In jazz there are suspended chords and stuff that gives you some kind of a discord. If Mpumi’s playing his fears at that moment when I come in, sometimes I have to play what I feel too, but in the process I have to figure out where he is. That’s where the jazz shit comes in.” There’s also metal there, in the sense of Cream, Deep Purple and early-early Sabbath, when metal was not a genre with rules and uniforms but a tendency, a serrated edge occasionally cutting the surface of rhythm and blues like the tailfin of something terrifying just below the surface. Then there are the traditional South African strains the members grew up with, alongside Fela and reggae. Somehow the force of all those elements swinging away at each other lifts the whole thing off the ground like a fish-tailing helicopter.

In an attempt to position the Jacks within this swirl of traditions, Mcata says, “I feel like we are like a growth on the side of not just the South African thing, but the African thing. An abscess. It could either implode, explode or, like, give the continent super powers.” It seems somehow appropriate to this dysfunctional pan-Africanism that even BLK JKS’ shared South African identity comes from different language groups: Xhosa, Zulu, Tswana and Pedi. This polylinguism expands the Jacks’ range rather than limiting it. “When you talk about vernac [vernacular] and how you bring that in it’s always melody first,” says Mcata. “If you have a big melody, putting words to it is a drag. Some languages just fit better phonetically, so we’ll be like, ‘Oh we got a language that does da-dada-da very well.’” 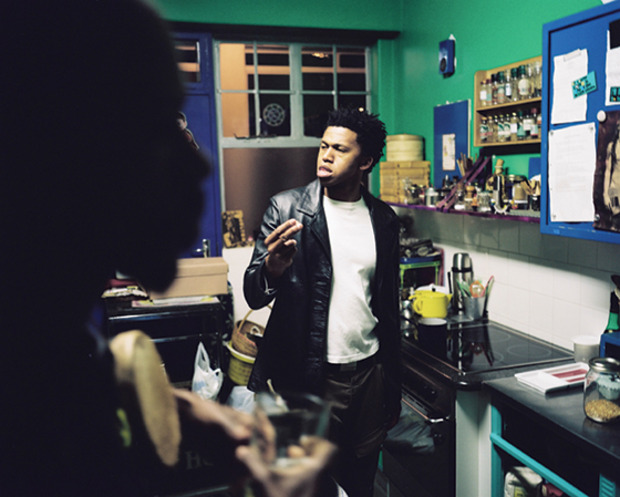 Put four dudes in a room with four different languages, a few words in common and a movie script to shoot, they might come back with a mess of a film or maybe some grand Chomskian thesis that offers a breakthrough understanding about the structure of language itself. After Robots sounds like that at times, and though the South African majors are hardly good guys in this story, they could perhaps be forgiven if they didn’t know what the fuck to do with the four-headed dub monster that walked into their office speaking in tongues, when all they wanted was the local equivalent of Living Colour. The SABC sessions were partly paid for with a Jacks promo spot on national radio, adding further to their aura. But with no label and no money to pay for their completion, the masters languish raw and unmixed under the tower.

The whole experience has left the group less inclined than ever to target their music for any imagined audience. “Now? Fuck it, we’ll play wherever,” says Mcata. “Forget the whole, ‘We’re gonna get the rastas to like our rock.’ If you have a gig, call us. Jazz event, whatever, we become the color of the gig. We don’t have a home.” As a result, their résumé is less a catalog of recordings than a collection of war stories about the weirdest shows imaginable: the old jail in Grahamstown, Youth Day at the Apartheid Museum, a private performance raising money for rural soccer teams held on the land of a wealthy farmer that meant driving five hours out into the veldt and sleeping beneath the heads of the farmer’s hunting trophies. There was the gig for kwaito station YFM with rapper HHP and the one where Ramoba got in a shouting match with the homeless guy standing on a pedestal as some kind of performance art. With each of these gigs, the legend—and the expectations—continued to grow. Even if they were too weird for primetime, “the only black rock band in South Africa” was too good for the press to resist and sooner or later the buzz had to go international. 2007 brought an offer from Diplo’s Mad Decent label, management by ex-FADER editor Knox Robinson, the appearance of a collector’s 10-inch of “Lakeside” in Other Music and Rough Trade, and a booking for SXSW for 2008, roughly in that order. 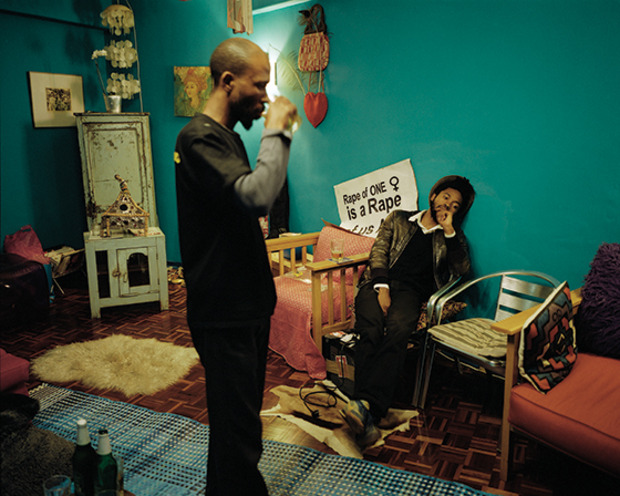 The Jacks meanwhile, having more or less given up on storming the SABC tower to liberate Robots, started on a series of lo-fi mini-disc recordings called Kilani Sessions after the sunny, eclectic Killarney loft of Makananise’s white girlfriend that serves as the Jacks’ headquarters. The new recordings have, if possible, even less light, more mass, more sucking gravity than After Robots. “Baragawana” brings more of Buthelezi’s medical obsessions, with references to the largest hospital in Africa. In “Vampire Stand-by Power” he employs a metaphor about machines using 40% of the electric current even when they’re off that somehow becomes the story of a pregnant girl and her dysmorphic baby. “Tinstaa” starts with the sound of CD skipping malfunctions, dissolving into acoustic blue-veldt guitarwork before the Sabbath-like bass comes in under the refrain, One by one, they gonna shoot us down. There are moments here that sound like African metal, not a pastiche of influences but a different thing altogether.

Back at the café, after sitting out of the conversation for a good hour, Makananise picks up his thread exactly where he wrestled it into silence, “I think what I was trying to say before, that from the first time we played together, I thought that BLK JKS could be like unexplored territory…some totally different kind of music.” It’s not the vision, so much as the sincerity, the struggle to articulate it, that give you pause. It’s enough to make you wonder what you wish more for the Jacks: that everything clicks into a fully realized visit to the black planet repeatedly glimpsed in the soup of their mind jams, or that they just keep looking forever, standing, so to speak, on the verge of getting it on, mapping their own brains as they go.

music / Features
FEATURE: BLK JKS Are Out to Map the African Brain or Kill the Patient Trying