Live: Passion Pit at One Step Beyond

Those Passion Pit dudes are on their grind. Mere hours after they played a filled-to-capacity secret show downtown, they headed up to the American Museum of Natural History to close out One Step Beyond last Friday. And they showed no signs of wear. First, the Activaire DJ's kicked things off with plenty of house to warm up the crowd while some danced and some remained torn between the floor and the spiral staircase to the planetarium. Then around 11, the lower level really morphed into the intergalactic dance floor it had been hinting at all night when Passion Pit hit the booth.


A few minutes into the set, people were still casually crowding the makeshift dance floor, but that was before the boys united the dancing masses with a stripped down version of Usher's "Love in this Club" sans Polow's triumphant backing beat. At first this kind of blew our minds. No Polow? Why would anyone do that? But then we remembered where we were and realized that Polow might make music for the club, but Passion Pit had just taken the club to the museum. Touche´! 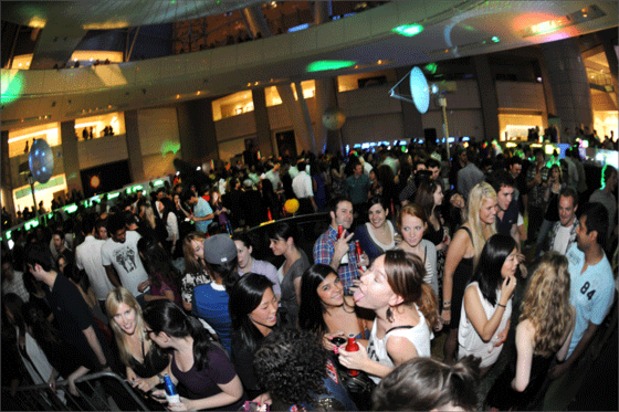 After this, they managed to keep the kids engaged with a steady mix of house, bass-heavy tracks and pop jams alike. At one point, this girl was totally wilding out on top of the elevated marble exhibit dedicated to the sun. Which makes sense because who knows when her next chance to spaz out to a "Good Vibrations" mash-up 10 feet from a scale that tells her what she would weigh on the moon will come?

music / News
Live: Passion Pit at One Step Beyond