Kanye West Thinks Tyler, the Creator Has the Video of The Year

Yesterday, Kanye West paused his day of #LUXURYREALNESS to let his 2,514,625 twitter followers (probably a much larger captive audience than the one that watches Jimmy Fallon) know that he's not out of step with OFWGKTA/YouTube's unrelenting march forward:

Tyler's likely spoken from a twitter or an equivalent type of shorthand oral/social platform since he was in middle school (at the latest), but Kanye is still relatively new to this. After bestowing his esteemed 'best' onto the video, Ye remembered to go back and tweet again, this time @ mentioning Tyler to get his precious attention.

Tyler didn't do Kanye the same courtesy! He didn't @ back, reacted to grand puba-Yeezy by framing the event in the context of his own life and his own progress. Anthropologists call this "empowerment." But don't be mad Kanye, he didn't mention his peer Justin Bieber's account directly, either: 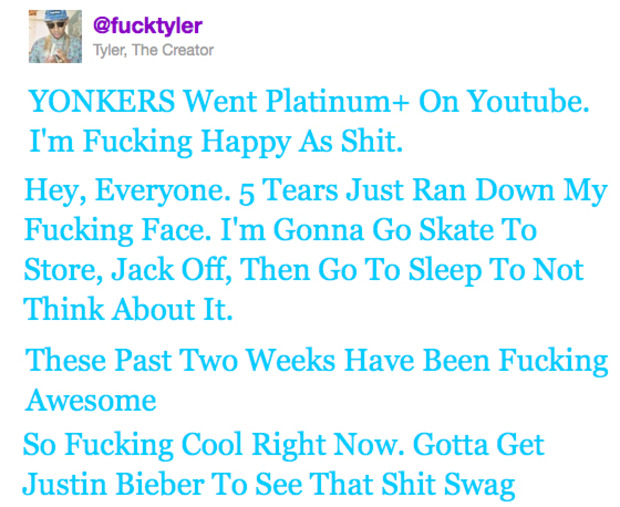 music / News
Kanye West Thinks Tyler, the Creator Has the Video of The Year