On April 8, 1994 I was sitting behind my desk at WFNX-FM in Boston. Around 11 AM one of the station’s disc jockeys walked into my office and said that something had just come over the newswire about a body being found in one of his Seattle homes. My heart sank and I was overcome with nausea. It would be hours before the official news was released, but I knew in my gut it was Kurt Cobain.

When people find out that I met Cobain a few times they always want to know, what was he like? It's still a hard question to answer. How can you ever know somebody when you just get one side of them, and for a brief moment in time? The Cobain I had met was sweet, frail, quiet and unassuming, but he was also sharp as a tack, the kind of person who could summarize a book in three words. He could be pissed off and mean, punk rock and anti-establishment. He was a guy who loved macaroni and cheese with hot dogs in it, the Vaselines, Evel Knievel, Bukowski, and the Andy Griffin Show. He was funny, and self-deprecating. He was a troubled artist who wrote some of the best rock songs in the last 40 years.

I interviewed Cobain on a number of occasions, but the more notable happened a little over two years before Cobain's death. I was asked to interview Nirvana for a promotional CD entitled Nevermind It’s An Interview. The band was sick of doing radio interviews and the idea was to record one definitive session, produce it with then-rare and live tracks, and send it out to radio stations across the world. The idea was that this way, Cobain, Krist Novoselic and Dave Grohl wouldn't have to answer the same questions posed again and again by disc jockeys who, like many, knew nothing about the band, outside of the fact that they had a mega-hit single “Smells Like Teen Spirit”. 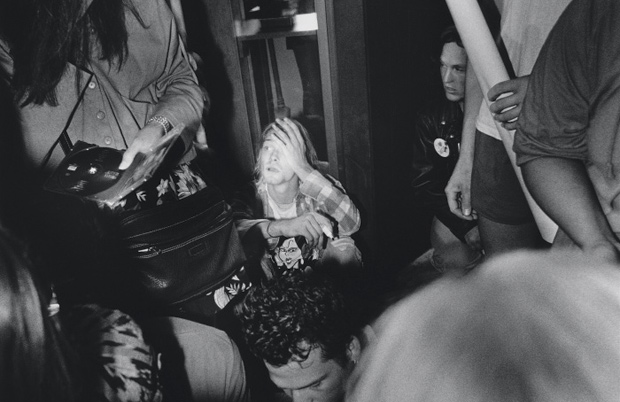 I hooked up with the band in New York City the day before Nirvana's first appearance on Saturday Night Live, and the same day of a special in-studio performance for MTV. We conducted and completed two separate interviews with Novoselic and Grohl that evening after the MTV gig. Cobain, who was scheduled for the same session, introduced me to his mother and then blew me off, disappearing while I interviewed his bandmates. When we were through I returned to my hotel room and smoked cigarettes, patiently waiting to meet up with Cobain. Around 3 AM the phone rang and someone told me the interview would happen “tomorrow,” before Nirvana's appearance on Saturday Night Live. Cobain was a never-ending conundrum. He had agreed to the interview with me, but he was intentionally going to make getting it done difficult.

They next day, the phone rang again. Things were running behind. “You are going to have to interview him around soundcheck for SNL.” I met Novoselic and Grohl with their families plus label and management people in the lobby of the Omni Parker Plaza hotel to be taken to NBC studios. Cobain and his new girlfriend, Courtney Love, stumbled out of the elevator into the lobby, laughing like a couple on their first date. Cobain had dyed his hair bright red and was wearing his trademark cardigan and ripped up jeans. Outside, a limousine pulled up to the front doors of the hotel. Cobain, Novoselic, and Grohl absolutely refused to get in it. They jumped instead into the regular passenger van that was right behind the limo. Once we were at the SNL studios, we had to endure hours of waiting around and watching rehearsals before Nirvana could jump on the stage for soundcheck. At this point I had pretty much given up on the interview. Cobain had barely uttered a word to me the whole time. Then, unexpectedly, he finally looked me in the eye and said, “I'm not going to blow you off.”

That night, Cobain smashed his guitar on nationwide television during the band's performance of “Territorial Pissings”. Grohl destroyed his drum kit. And Novoselic, well, Novoselic did his thing too. It wasn't the best Nirvana performance, but it was them in their truest essence—honest, anti-establishment, kick-ass punk rock with no pretenses or preparation.

30 minutes after SNL ended, I finally met up with him in his hotel room. In a surreal reflection of his newly acquired superstar life, Cobain's room was completely destroyed and utterly disorganized. Cigarette butts were all over the carpet, clothes were strewn about all over the floor, and bathroom towels were everywhere. During our interview, he told me about how he and Grohl had lived together in Olympia, in a little cracker box room of an apartment, with dirty plates stacked in the sink from the moment they moved in until the moment they left, and with used corn dog sticks all over the floor. Now, just a year or so later, it was as though Cobain had packed up his trash from that apartment and shipped it right up to his hotel room. Being there made me nervous. Interviewing Cobain intensified that feeling. His stare pierced you. He had charisma, charm and power, and he was a great bullshit detector; he could make you feel so insignificant simply by staring at you and not saying a word. But Cobain could also make you feel like the coolest person in the world. We ordered room service, smoked a lot of cigarettes, even talked about Nirvana's hit single that, on this night, was ripping up the charts and breaking all sorts of sales records throughout the world.

“This friend of mine and I were goofing around my house one night, and we were kinda drunk,” he said. “And we were writing graffiti all over the walls of my house, and she wrote 'Cobain smells like teen spirit.' And earlier on, we were kinda having this discussion of revolution, and teen revolution and stuff like that, and I took that as a compliment, I thought that she was saying that I was a person who could inspire. I just thought that was a nice little title. And it turns out she just meant that I smelled like the deodorant, I didn't even know that deodorant existed, until after the song was written.”

We talked about Cobain's hero, William Burroughs, and how he was looking forward to seeing the movie version of Naked Lunch, and his favorite movies like Rear Window and Paris, Texas. Cobain's sense of humor was childish and intelligent, serious and engaging. When I asked him if there was anything he wanted to add to our interview, he said, “I guess I could say something really clichéd and punk rock to the kids.” Cobain laughed, and then, as he often did, he turned serious about the same thought he'd just joked about. “Start a band. Especially girls. They should start bands. There aren't enough good girl musicians.” 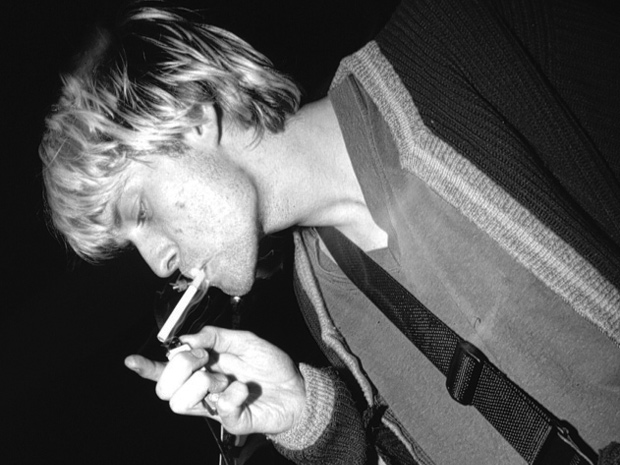 That duality was a marked trait of Cobain’s. In an effort to shake up interviewers or bend history in his favor, he would frequently make up stories about topics that seemed to stir up the pot. “Just because I say ‘I’ in a song doesn't necessarily mean it's me,” he said. “A lot of people have a problem with that.” He would make up stories in his lyrics, but also make up stories about his history. One he would frequently tell was a myth about how he got the money for his first guitar, which had it that after his mother threw his stepfather's guns in the river, Cobain paid a kid to fish them out and sell them. Truth was his uncle bought his first guitar. Cobain would also talk about how he lived underneath a bridge in his hometown, but this too was widely exaggerated.

Another thing he used to mention a lot was suicide. Sometimes over the years I’ve thought about whether he planned the whole thing out. “Maybe I’ll just blow my head off,” he’d say in countless interviews over the years. I’ve wondered if he didn’t perhaps think he’d get the band famous then kill himself in order to cement his legacy. I don’t really believe he had a fixed plan, but I think about it. He certainly used to say it often.

But then Cobain knew how to manipulate the press. In fact he was a master at it, because he wanted to be perceived as a punk, no matter how successful he got. “I just don't agree with the old punk rock ethos, of like, you have to starve to be an artist,” he said. “It's bullshit.” He said over and over throughout his career, “punk rock means freedom,” It was a total mantra. He must have said that 900 times. But it doesn’t really mean anything. It was something he kept telling himself—if I’m punk rock I can escape everything. It was freedom from the establishment, freedom from his parents, freedom from his high school, freedom from rednecks. Whatever he felt imprisoned by at the time, punk rock was his escape from it. But the problem made it worse. The problem was that as he became more famous all the people he hated and that he didn’t want as Nirvana fans would become Nirvana fans. He hated some macho, groping jock being in the pit. He’d stop the show and have that guy removed. He absolutely hated that shit, but as the band became more famous, nationally famous, he didn’t have that control over it any more, couldn’t decide who should and shouldn’t be a Nirvana fan.

So his mantra was failing, in a way. Punk rock wasn’t freedom from everything he’d hated. You start a band to get you out of a shitty town, as a way of saying “fuck you” to everyone and everything you’ve loathed, and then it happens and turns into something way beyond that, something you’d never really foreseen. The first time I saw Nirvana play was on the Bleach tour. After the gig I just walked backstage and Cobain was sitting on a couch. There was no security, no hangers-on. At the SNL recording, less than two years later, there were label people, management, scenesters and the band Sonic Youth. I just thought “oh fuck, it’s like a circus.” Even on the road there were techs and so on, and it’s highly unlikely that this retinue is what Cobain had meant when he talked about music being freedom.

He was totally idealistic. He’d totally ignore you if you were a reporter or someone involved in the music industry, but if he saw a 15 year-old punk kid, he’d just go and talk to him. For Cobain, the best part of his career was that period just before Nevermind came out, and when I asked him that night about how it felt to smash his guitar on SNL he was really proud about it. It was that big “fuck you” to the shitty town and the shitty people and the shitty life and the shitty future, except on national TV.

But it didn’t last: within a month and a half Cobain was married to Courtney Love, who was pregnant with their child. His drug use was mounting; later, while on tour in Rome, he overdosed and lapsed into a coma. Many people I spoke to who knew him well said to me that he was never the same after the coma, that he seemed different, lost somehow.

The official news of his suicide came late in the afternoon of April 8, 1994, and though it was shocking and devastating, it was not surprising. Kurt Cobain had left us many clues of his anguish. But there was no way we could have prepared for the day when it actually might happen, or what kind of effect it would have on our lives and music. He never told us that.