Woods: Until the Morning Comes

Woods check out, zone in and make beautifully intimate music for the dark moments worth remembering.

Rocketing over potholes torn into the road by relentless rain, it seems like Woods frontman Jeremy Earl has a death wish. The seats of his van jolt and bounce while Bob Dylan’s “Ballad of a Thin Man” plays like an alien transmission on the radio, cut with constant static. There are no lights anywhere. We’re in the middle of the woods in Warwick, New York, a rural suburb populated with skateboarders and teenagers behind the counter at local coffee shops grimly making turkey club wraps. In anyone else’s hands, the ride would be a white-knuckled, cold-sweat experience, but Earl grew up here, and he knows the roads well.

Jarvis Taveniere, the band’s multi-instrumentalist and Earl’s closest recording partner, and 23-year-old bassist Kevin Morby, are along for the ride. We’re headed to a shitty bowling alley in town. Nobody wants to bowl, so they post up around the bar. Two kids are flipping channels between a Family Guy rerun and Monday night wrestling, waiting for their dad to finish his game. The bartender says she’s out of glasses, and hands over beer in plastic keg cups, only to turn around and pour her friend a rum and coke in a massive glass the size and shape of a bong. Earl may have spent his childhood here, but after just one drink and a round of strong stares he’s ready to go back home. 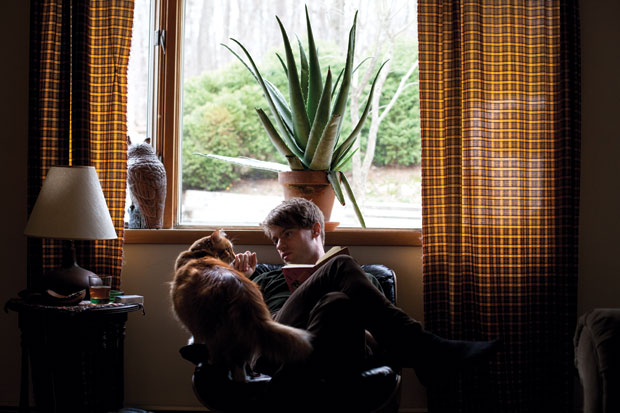 Earl met Taveniere as well as Woods’ wild card, cassette collagist Lucas Crane in college at SUNY Purchase. Before moving back to Warwick, he lived in Brooklyn at a place affectionately dubbed Rear House—literally a house behind an apartment building on a nondescript block in Bushwick, Brooklyn, surrounded by mostly factories and bodegas. Every member of Woods has lived there at one time or another except Crane. Morby still does, as does Earl’s girlfriend. It was at Rear House that Woods solidified as a band, and it was from there that Earl started his record label, Woodsist. The label fueled the local scene, releasing early records from Brooklyn bands like Crystal Stilts and Vivian Girls, and plenty of albums from influential non-New York bands like Wavves and Kurt Vile. Earl found himself an accidental tastemaker, creating a “Woodsist sound” just by putting out music he liked. Often, the bands sounded nothing like Woods, but were united by a homemade approach to recording and a penchant for poppy hooks. Their only real similarity was that they all bore the Woodsist logo as a stamp of approval. 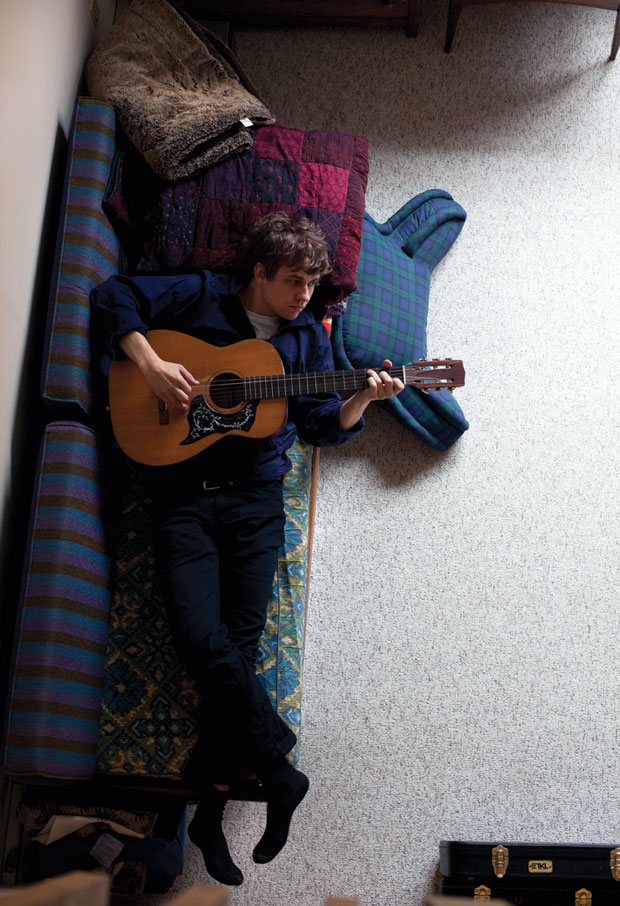 By the summer of 2009, Earl began organizing the Woodsist Festival, bringing in bands from all over the country to play in untraditional venues and empty lots across Brooklyn. From there, everything got much bigger. Presented with the possibility to expand, Earl briefly agreed to merge Woodsist with a larger label. But when the pressure behind running a serious business revealed itself, Earl balked and backed out, finally moving back upstate to Warwick. “It was a good time, just partying like crazy in Brooklyn—but that was the beginning of the end. I was like, I can’t handle living in Brooklyn. This is too much for me.”

Earl’s house in Warwick rests on two acres of land. He’s got a good-sized garden in the back where he grows tomatoes, kale and cucumbers as long as the groundhogs don’t get there first. He cooks often because it’s kind of a hassle to go into town. His living room is lined with records and cassettes—some come from Woodsist, while others come from the boutique mini-labels he runs, Hello Sunshine (for jammy stuff) and Fuck It Tapes (for cassettes). He’s also got a collection of books you’d expect to see on the shelf of a dude with a beard who is in a band called Woods: plenty of Bukowski, Steal This Book and an index of psych albums longer than most dictionaries and definitely heavier. There are owl figurines everywhere, a collection that grew from one wooden owl sculpture Earl jacked from an Adult Swim party during a bizarre temping job that involved dressing up as animals and getting buzzed on free booze with the guests. That owl is featured prominently on the cover of Woods’ second release, At Rear House, and it now stands watch in Earl’s front window, regarded suspiciously by Harvest, his massive cat. 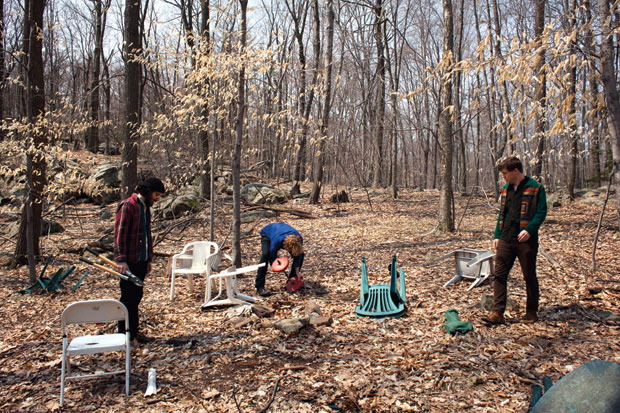 During the week, Earl runs Woodsist out of a cluttered back office, taking calls from his landline because there’s no cell reception. The label continues mostly as it did before, the concept of upward growth not entirely abandoned, but left to happen more organically, much like Woods’ career. In many ways, Earl leaving Brooklyn has freed up the band. Woods is still their main focus, but each member uses their downtime to explore their personal projects, folding what they’ve figured out on their own back into the band. Though they’re in it together, it’s Earl’s normal upstate grind that keeps things moving. He’s usually asleep by 11PM and awake by 7AM. It’s a controlled existence for a guy that makes music that sounds so loose and unmoored. Since the release of At Rear House in 2007, Woods have put out an album a year. “If I tried to wait longer than a year, I’d be going crazy,” Earl says. It’s been a subtle development from the naked downer songs of the earlier records into the full-bodied psych jams that populate their latest, Sun and Shade, which was written at Earl’s house while drinking a Spanish concoction made out of brandy and anise called Sol y Sombra (meaning Sun and Shade in Spanish). Unlike other Woods releases, it was written in Warwick, not at Rear House, which contributes to its isolated, deeply enveloping sound. “It’s locked here,” Earl says. “We’re not going to go out to a bar, you’re not going to get a call from your girlfriend like, ‘Meet me here.’ We’re just going to concentrate on getting into this.” 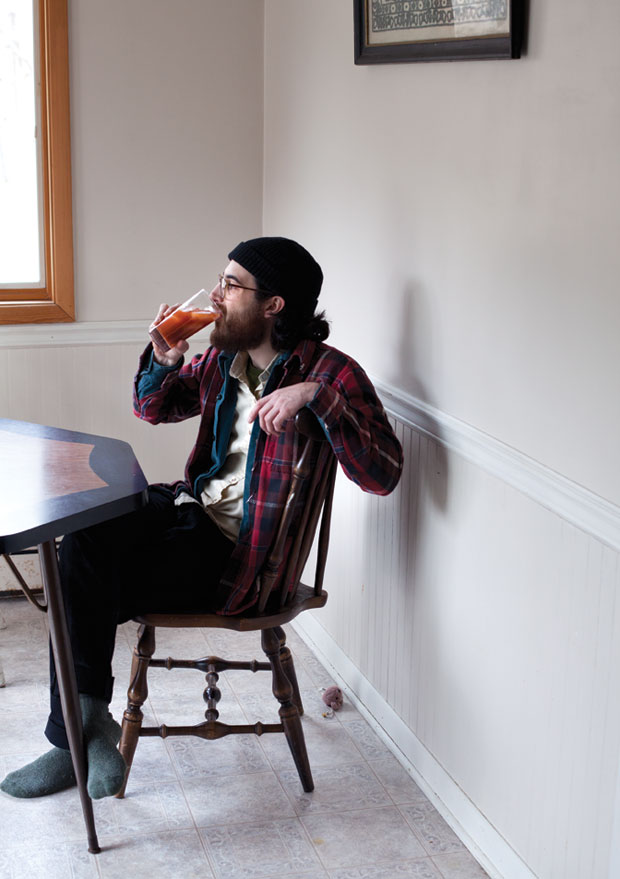 But like most other Woods albums, Sun and Shade was written and recorded by just Taveniere and Earl, and it’s a logical extension of the sound they’ve been perfecting over the years. The freak-outs are longer and more plentiful and the acoustic songs are more concise, outward looking and sun-baked. It’s a deceptively comfortable album that reveals intensely emotional, semi-hermetic insight from Earl, whose voice on tracks like “Wouldn’t Waste,” is at its most fragile even as he’s spitting pure venom in the refrain, I wouldn’t waste a night out for you. “As far as the jams, it’s another thing I can’t not do,” Earl says. “I’m always going to want to experiment. That was a big vision with the newest record—trying to get into that a little more when maybe people are expecting us not to. To make it—instead of a collection of songs—more of an experience.”

Stoner vibes and long, dark instrumental trips aside, Woods is actually a pretty normal band. “For me, playing in Woods is completely organic,” says Crane. “It’s based completely on my friend relationships.” Morby echoes this sentiment, “Woods feels like a loose family. If it makes sense for me to be doing it, then I’m definitely going to always do it.” Their music has a timeless, comfortable quality that can only come from a group that sees themselves as family more than bandmates. Like The Grateful Dead at their most focused, but with the musical influence of a few extra decades at their disposal, Woods produce impeccably crafted songs that most parents would be comfortable with, if maybe a little freaked out by. “I think what I like about Woods is just indulging our impulses all the time,” Taveniere says. “There’s never something we can’t do. It’s like, ‘Lets pretend that we can play these instruments,’ which is sort of the way I started playing in Woods—playing drums, which I couldn’t play. This is the music I want to make now.” It’s this freedom that keeps the band interesting and constantly shifting. Earl’s syrupy falsetto is either beautiful or completely incongruous with the music, depending on who you ask. Woods will never go out of style, because they were never really in style. And, like any cult favorite, those that love it, really, really love it. “At one show a woman gave me an owl necklace,” Earl says. “It was a fake gold long chain thing with a bling owl.” 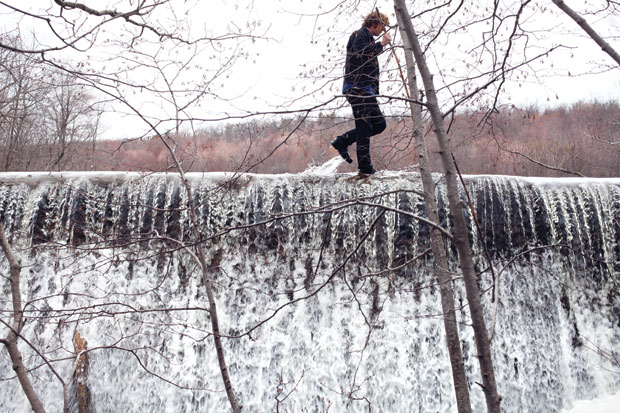 After a day in the country, Crane has to head back to the city early, but during his brief stay, he runs wild in the woods around Warwick, balancing precariously on the edge of a man-made waterfall until Taveniere and Earl tell him he should think about climbing down. When Earl drops him off at the desolate bus station, he checks to see if he has enough money and presses him to call if he gets confused about which bus to take.

Later that night, Taveniere and Morby follow Earl down his pitch-black street. It’s his birthday at midnight, but he rebuffs any attempt to make something of it. The paved road is mottled and rutty, and the further they go, the bigger the surrounding houses get. One is heavily decorated with horse ephemera but shows no sign of actually boarding any. It’s silent, though occasionally a motion-sensor porch light detects our movements and bathes the shadowed inlets in a halogen glow. Eventually we reach the remains of a cement bridge, the most direct route to Earl’s house, that’s been washed away by the harsh winter. The half that’s slanted into the water looks, impossibly, like decaying concrete. It’s dicey to walk on, let alone drive over, but occasionally it happens. When Earl’s friend came to visit and somehow managed to pass his car over it without any trouble, Earl was surprised, expecting the car to come from the other side. The image of him waiting in the street to greet a visitor is a perfect one: a modern farmer without a farm, ready to invite travelers into his home with open arms.

Earl exudes such a welcoming calm that the weirdest effect of his escape from New York is not that he’s more isolated or more disconnected from the rest of the band, but rather the void that he’s left behind. Back in Brooklyn, things feel quieter. New York’s music scene is still pulsing, but it’s shifted more towards electronic acts. Earl even admits that he’s lately immersed himself in San Francisco’s budding rock world. Some superfans have confused Earl’s move upstate for a rock music treasure hunt, following him up to Warwick as if he were a genial pied-piper that could lead them to an undiscovered trove of new talent. One dude even went as far as moving down the street, hoping some of Earl’s good-natured success would rub off on him. There’s a big group of people who see a magical energy surrounding Earl and the rest of Woods. Whether or not it’s actually there is irrelevant.

After making their way back to the house, the band settles in with the last few beers from the fridge and a sausage Earl wants to get rid of. There’s talk about doing something else, but Taveniere gets distracted when he realizes it’s about to be midnight, and begins shouting a happy birthday that’s echoed by Morby. Earl quickly deads it, fiddling with his tiny TV and pulling up a DVR’d episode of The Office. Before long, everyone is drifting off to sleep, and Earl retreats to his room. In the morning, he’s the first one up and is careful not to wake anyone, but you can still hear the faint, comforting sound of some cassette playing softly from behind his office door.