As music festivals go, the Roots Picnic is very much its own beast. With none of the ditzy-hippie desert accessories—dream catchers, feathers, beaded headbands—of Coachella, the corporate-sponsored social media machine of SXSW, the daunting primal landscapes of Sasquatch or the disco lollipops and synthesizers of Ultra, what it resembles more than anything is a good old-fashioned block party with some superfine music. Philly pride blooms all over this small patch of concrete by the water.

Day One begins at noon, with big confusion. Because: where the hell is this thing? Under the Penn’s Landing sign on the waterfront, there are no signs of life, no stream of kids, no throbbing bass, none of the usual signifiers. We latch on to some girls who seem to know what they’re doing and make a pilgrimage down Christopher Columbus Boulevard toward a vague promised land in the distance. Scalpers start hitting us up. An Obama volunteer hands out posters. The bass kicks in. Yes, we’re headed in the right direction. 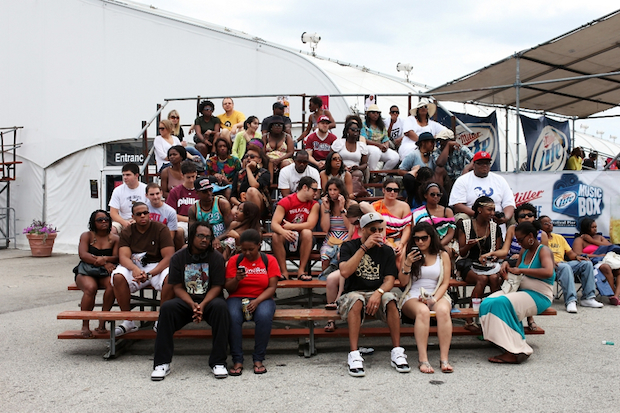 On the Main Stage, emcee Amanda Seales announces Grand Prize Winners from Last Year, confusing the hell out of everyone unfamiliar with the young Atlanta-based hip-hop/guitar experiment. “Don’t be alarmed if we look strange,” says the lead guy. “That’s because we are.” One of them is wearing a Roman battle helmet, because that’s where he’s coming from.

Backstage, little kids are playing basketball. Bigger kids are drinking beer and playing cornhole (the tailgating game, ahem). Hugs and peals of laughter all around; everyone here seems to know each other. A stranger bums a cigarette—he grew up in the same neighborhood as Black Thought, they’re old family friends. He’s a professional poker player now. No, he explains, not all of them wear sunglasses at the table like Scotty Nguyen.

The line for Gigi and Big R’s Caribbean soul food truck gets even longer. Annie Clark from St. Vincent eats an apple instead. 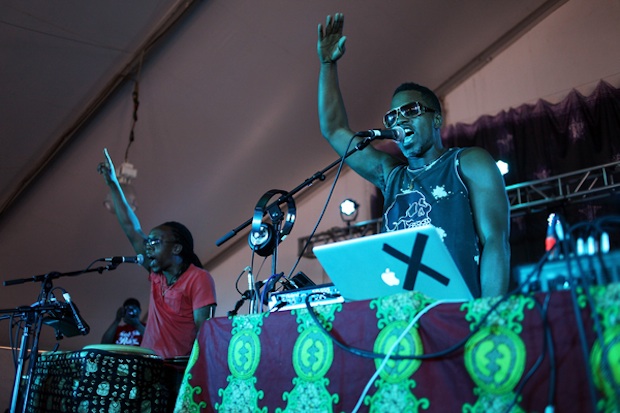 Time to go! Over in the tent, there are ripples of excitement over Shabazz Palaces. These Seattle dudes cast a limbic spell, spinning a fine mystical gauze over the crowd with “Youlogy” off their first record. They deploy some lo-fi choreography, a combination of sign language, spin moves and hand slaps. They are post-cool, entirely of their own untouchable universe.

On a different tip entirely is Mr. MFN eXquire. It’s hot today, but he’s dressed for winter on the Mongolian steppe: camo hunting jacket, fur hat with earflaps, sunglasses, piles of beads. It’s joyful chaos when he steps offstage for a field trip into the crowd—we can’t make out what his exact words, but the man loves his expletives—his crew crashing into each other like asteroids.

Over in the tent, we cannot get over James Murphy’s head of hair—so lush and shiny!—as he lays out a disco-heavy set for the LCD-mad kids in the tent. 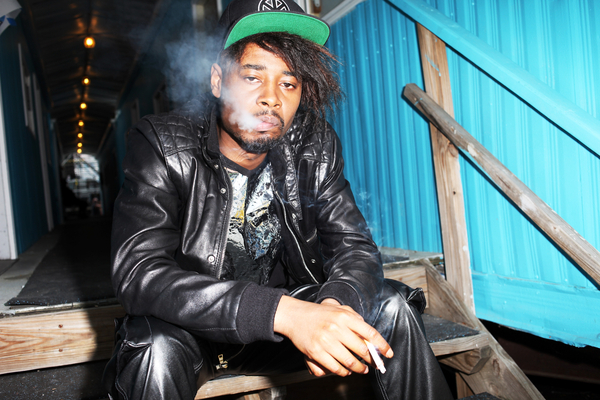 Off-kilter fashion plate Danny Brown steps up to the Main Stage wearing black leather cargo pants and a black T-shirt with metallic bib. He slams through “Radio Song” and “Wit It,” and a few more then sidles away. 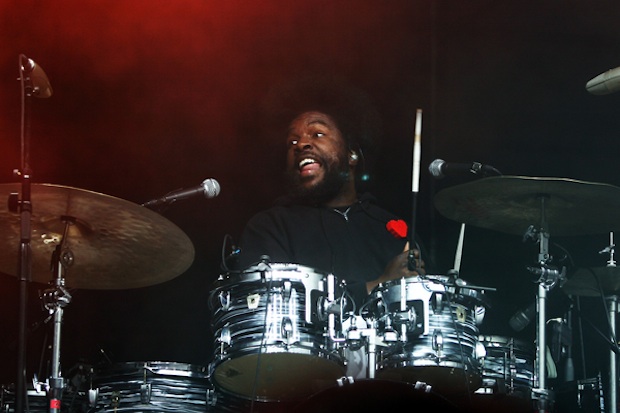 Night falls, and our gracious hosts the Roots come out to monster crowd love. Questlove, Black Thought and Co. pay sweet homage to MCA with a cover of “Paul Revere.” Soon Wale comes out and gets into a go-go-style call and response with the crowd about butt love, which prompts Black Thought to come out and apparently whisper a little intervention in his ear. This here’s a family party! Then the sound cuts out during his set. Later on Twitter we’ll read about a supposed backstage confrontation between Wale and hostess Amanda Seales, something about a Twitter beef. Maybe this just wasn’t his night. 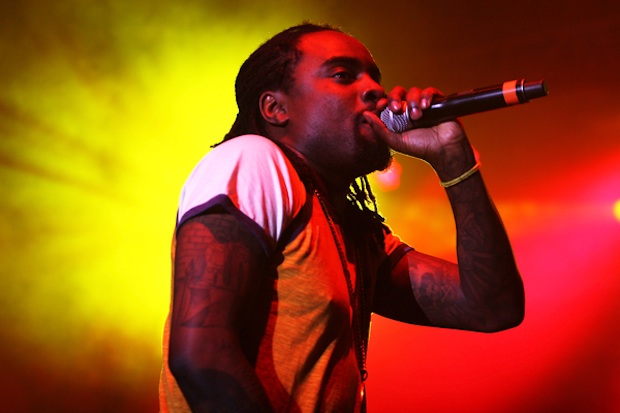 Black Thought introduces De La Soul by saying the Roots wouldn’t exist without them. Together, they run through a ton of cuts from Three Feet High and Rising and beyond, an entire stageful of middle-age hip-hop veterans looking and sounding as spry and nimble as ever. Surprise guest Yasiin Bey aka Mos Def comes out too. 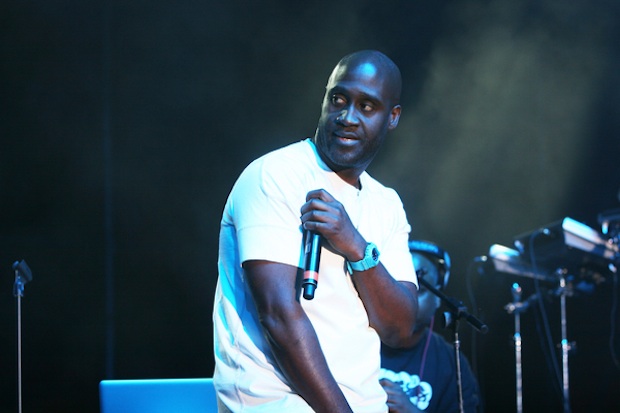 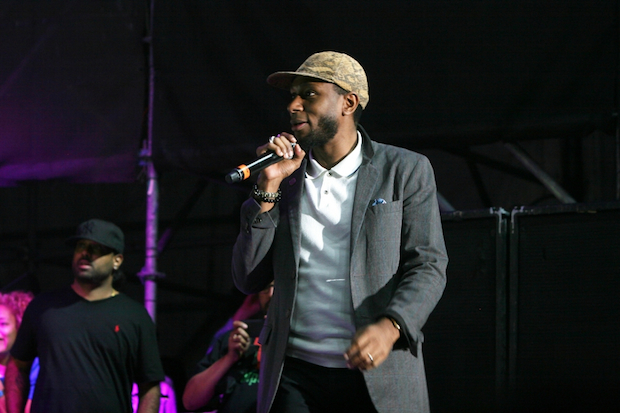 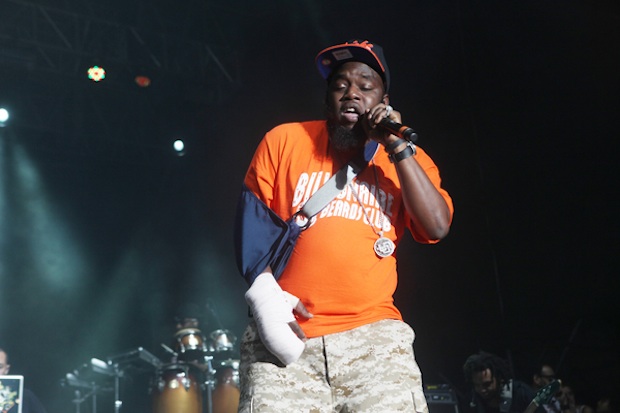 The FADER after-party takes place in a space the size of two subway cars, which will soon be as crowded as the rush-hour commute and approximately a billion times more joyful. Hometown hero Freeway is the night’s first DJ, and despite the fact that his hand’s in a cast and he’s never deejayed before, he has no problem getting bodies moving. Ishmael Butler and Tendai Maraire from Shabazz Palaces are posted up against the wall. People are getting loose on their third Stoli Orange and sodas when Maseo from De La takes over the decks/iTunes, playing Michael Jackson, the Axel F Theme (yes!) and the Eurythmics. One more drink, one more minute, and things will spin out. After fifteen hours of music, it’s time to pull the ripcord and head home. 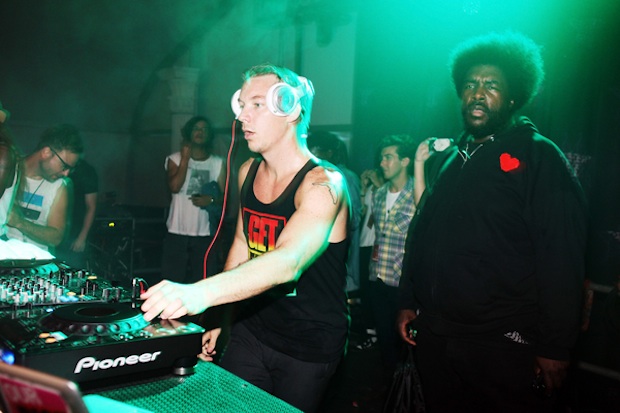 Summer music festivals are obscenely bodily: calves and shoulders flying everywhere, all shapes and sizes getting gnarly with each other, sweating, drinking, eating, peeing in port-o-potties. It’s like that Heironymous Bosch painting “The Garden of Earthly Delights,” but with jean cutoffs and beer cans.

Major Lazer (sans Switch) gets things started with a pair of truly elastic dancers decked out in ladybug colors. Hype man Walshy Fire is relentless: Jump! Get low! Hands in the air! Confetti guns are blasting, Diplo’s shirt is coming off; he’s surfing the crowd.

But oh, the clouds are gathering. Literally. In one direction it’s blue-skies summer day, but in the other, a malevolent green-black overhead threat. We have three minutes to secure shelter before things turn violent. The food tent backstage fills with to capacity, then beyond. The wind picks up. A crack of lightning splits the sky and we’re in the middle of an end-of-days downpour. Rakim’s supposed to be on in 5 minutes, but there’s no way that’s happening now.

Let’s take a minute to thank God for happy accidents. Because without this unscheduled deluge, Diplo wouldn’t have taken the tent stage early for his DJ set. Without this deluge, everyone at the festival wouldn’t have packed in there like sardines, paving the way for a highlight of the weekend. Diplo calls local girls up on the stage and they shake ass alongside the pros. Someone does a handstand shimmy. Questlove is up there, cutting a rug. The humidity in the tent approaches Danang levels. It’s a full-on rave. 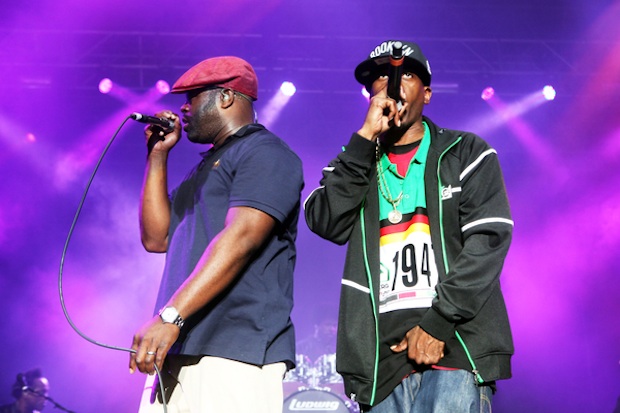 Eventually the rain passes and everyone heads back outside. On the Main Stage, the Roots introduce Rakim, who’s going to run through Paid in Full with their help (and Black Thought standing in for Eric B). Rakim is wearing a windbreaker and paces the stage like a panther. His presence is huge and fearsome, and when the mic cuts out (thanks to the earlier bad weather), you worry he might snap. But nah, he cool.

Headliner Kid Cudi can’t make it—a little problem with the private jet, you know how it goes—but the Roots hold it down, playing into the night with a little help from special guests Freeway, Jakk Frost and Skillz. Kid who?

Afterwards, back at the hotel bar, Diplo and his gang watch the Celtics beat LeBron and the Heat on TV before cutting out to DJ an after-party. Apparently it was a good night for the northeast all around.