A single-file line snaked back and forth just inside Prudential Center in New Jersey, jamming the will call room with predominately Asian but hard-to-typecast fans, some in their twenties coming straight from the office, some in bedazzled surgical masks and holding cardboard cutouts. Behind me in line, a teenager asked his impatient mother if she remembered to buy kitty litter. When the doors to the venue opened 90 minutes late, a security guard inundated with nervous questions told everyone, "This is on 2NE1. We have concerts here all the time and it's never this late… Never! Ever! We're just like you: mystified."

For the overwhelming majority in attendance, this was their first time seeing 2NE1, the four-girl Korean pop group crowned last year by MTV Iggy "Best New Band in the World." In New Jersey, their two-hour performance worked to both dull some of the shine of being internet stars from across the ocean, and to solidify their position—even without the digital mystique—as powerful, well-rounded artists. When the stage's enormous scrim finally fell and 2NE1's 50-million YouTube hitter "I Am the Best" blared, CL, Bom, Dara and Minzy sang and danced inexhaustibly atop individual platforms wheeled by pairs of buff men. CL, the group's best English speaker, shouted an introduction: "Tonight I'm gonna make the show worth the wait, because I'm about to go craaazaayyy!" Hundreds of feet above the stage, championship banners for the New Jersey Devils hockey team fluttered in time.

Onstage, the girls looked as diminutive as their slender five-feet frames really are, but they were dressed impressively. First, they sported neon Adidas track jackets with the wearer's face printed huge on the front. 2NE1 recently starred alongside Nicki Minaj in an Adidas originals campaign, and the recurring Jeremy Scott-designed outfits emblazoned with the sports brand name evoked both early hip-hop and 2NE1's unabashed commercialism. Between songs, they transitioned through jackets with stuffed animals sewn on, billowing dresses of Muppet-like blue shag, cheerleader gear and rainbow-colored gowns. The rotating crew of 20 dancers was costumed almost as immaculately, that is when the guys weren't shirtless, which was often

The members of 2NE1 have all released successful solo projects, and in order to give the constantly-in-motion girls breathers, they alternated taking individual command of the stage. CL performed—or pretended to perform—a six-song DJ set from an insanely elevated birdnest-like platform, mixing Rihanna's "We Found Love" into Madonna's "Hung Up" ("One of my favorite songs, y'all!"). When it was Dara's turn, she sauntered to the edge of the horseshoe-shaped stage and scanned the crowd: "Before I start my next song, there's one lucky guy I would like to sing to... Tonight I want to be sexy... I want to pick the guy who loves me the most. Who can be that be? The guy with the yellow shirt?" But that was all the attention he got, this mystery man; besides the intro, Dara sang the song like any other. After it ended, she ran offstage, and in one of the night's most compelling moments, a camera followed her into the dressing room, projecting the scene for the audience. The girls hurriedly touched up their makeup and put on earrings, winking at the camera and flashing peace signs and tiger claws, then ran through an under-stage passageway to position themselves for the next song. The interlude was both familiar and jarring. In the US, we engage Asian pop groups like 2NE1 almost entirely through online video, where even their behind-the-scenes clips have an adorably manicured sheen. But when that wall was broken and they returned in person, to ear-splitting screams, it served as a reminder of how exciting it can be to take internet fandom offline and experience it among thousands of seriously shit-losing fans. 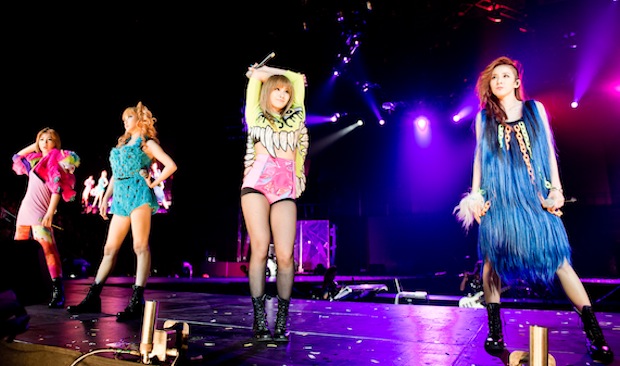 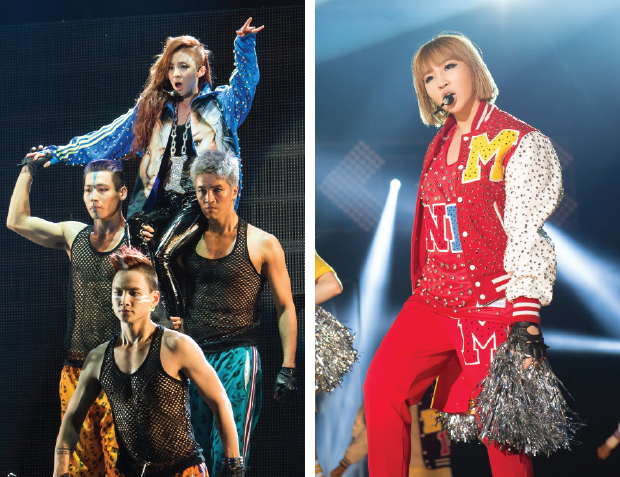 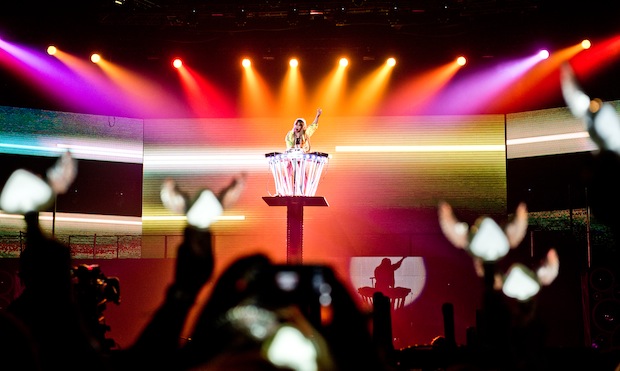 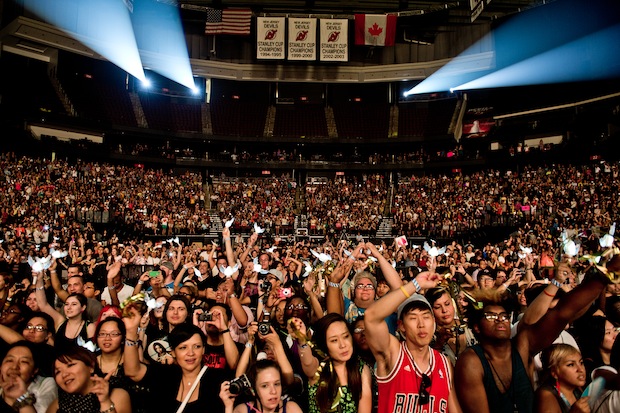