Pop music very likely taught you more about the birds and the bees than your parents ever did, so it’s no surprise that when you actually experience the highs and lows of love, it’s music you return to for company. Ten artists reflect on some of their favorite songs about the sometimes glorious, often perilous power of love.

I made a lot of mixtapes in high school, mostly for a certain boy, and mostly variations on one idea: each side (45 minutes) was the exact length of the drive between Tacoma, where we lived, and Seattle. This boy could drive and I couldn’t, so sometimes we’d go up there for a change of scenery, because we could. Side A was meant for the daytime, then Side B started as we were leaving that night and wound down slowly. So it’d be late when he’d turn off at my exit as the last song played. This song closed one of those tapes, and I think the lyrics are perfectly suited to that memory: young, pure, love—and looking back on it.

The Supremes, “You Keep Me Hanging On”

“You Keep Me Hangin’ On” means a lot to me. It gave me a new perspective on a relationship I was in and the strength to resolve all of its conflicts. It’s such an emotionally complex song—Why don’t you be a man about it and set me free/ Let me get over you the way you’ve gotten over me. I wish I could go drinking with Diana Ross and talk about my problems.

I like how this song treats love like something funny and easy and sexy, not something melodramatic or epic. The chorus part goes, you’re the kind of girl that fits in with my world/ I’ll give you anything, everything if you want things. Both verses make Syd Barrett seem like he’s wandering along in life with no plan. He’s making it all up as he goes. The first verse describes a cool bike he’s riding, and then he says, I’d give it to you if I could, but I borrowed it, which I think is funny considering he promises her “anything, everything” later in the song. That idea of finding a girl that fits in with your world and giving her whatever she asks for is very beautiful. It seems like a silly song, but it’s actually very romantic.

This one gets me every time. Marvin Gaye was in the middle of his divorce and couldn’t pay the settlement or alimony, so he agreed that the advance and profits of his next album would go to his ex-wife. He named the album Here My Dear, and it’s one long, emotional and bitter love letter to her. It peaks with this song, where he goes through their relationship for four minutes, before ending the song singing the title: When did you stop loving me?/ When did I stop loving you? I feel his pure emotion and the pain in his voice. It’s rare to hear such a tragic and honest song about love. I feel a draft in my eyes every time I hear it.

I feel like the most painful part of a breakup is parting with the vision of an imagined future that you created for yourself and another person. Once you reconcile that you really are just the universe’s bitch and that it’s delusional to actually believe any of the televised, Disneyland promises of eternal love that have been crammed in our skulls since birth, what are you left with except raw-as-fuck cynicism and art? I appreciate Vashti’s total earnest real talk. Someone needed to say it. 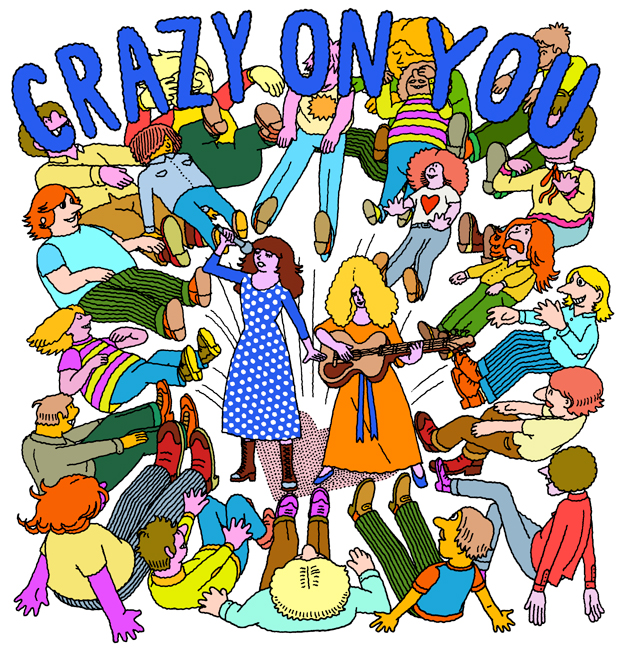 For some reason I’ve always “fallen in love” to songs about complicated situations and endings. Case in point: Joni Mitchell’s “Carey.” I mean, there’s a sort of optimism in the song, but it’s on a record that is essentially dedicated to processing grief and nostalgia in this totally myopic and narcissistic way. During one of those world-quieting blizzards in New York, years ago, I put “Carey” on repeat in my headphones and literally sprinted through five feet of snow, all the way home. Little piggy.

“Sara” has always stuck out in my mind as one of the most gut-wrenching love songs of all time. It’s a deeply personal song that comes as a sober closer to a fantastical, dream-like album with songs about boxers, mob bosses, mythical brides, lovers and outlaws in Mexico. With forlorn lyrics about lost domestic bliss, Dylan reveals intimate moments from an entire relationship, as though the whole thing’s flashing before his eyes. There’s something about the song’s biographical nature that makes it all the more painful, and with that legendary line, stayin’ up for days in the Chelsea Hotel writing “Sad-Eyed Lady of the Lowlands” for you, he references a love song he had written for the same women nearly 10 years earlier. His plea feels genuine, but there’s an element of guilt and sappiness to his tone that gives you the impression he knows he doesn’t deserve her anymore. In the end, it’s the futility of his words that make each howling refrain of her name turn the knife a little deeper. It’s harrowing to witness the desperation of a man who put so much work into remaining mysterious bare his anguish to the world in one last grand gesture to keep the woman he loves.

Heart, “Crazy On You”

I’ve always thought that the Wilson sisters were the most badass ladies around. My favorite love song is “Crazy On You.” I took the chorus to mean that she could freak-the-fuck-out on her boyfriend, and it would be fine, because she was Ann Wilson, which clearly isn’t what the song is about. But I thought if I could get up and play and sing like those women, then I could be in any relationship, and it would give me license to be the most crazy bitch in the world, and go crazy on anyone I wanted to without feeling ashamed. I never acted on it, but it was a constant daydream against every ex-boyfriend I ever had when I was a teenager.

This song is the sound of the inside of two souls and their earthly vessels in love: blood pumping and pheromones surging forth through fluids and thoughts exchanging—combining fantasy and reality so rapid-fire but slow, slow, slow. When I hear it, I feel high school and the nervousness and uncertainty of first trying to understand what love meant, physically and spiritually. Why was it the most nerve-wracking, exciting thing on earth? Why did it make me feel so alone and useless in its near-constant absence? But when I hear “Baby,” I also hear and feel the sense of deep, mature sensuality and fully realized spiritual love—making love, living and breathing love so full and deep with nothing left to want or need. If you happen to be in love, enjoy this song on repeat with your partner in any way that seems right, and you will feel it enhance the life of your love. If you are alone, sit on a cushion and meditate on this song. Play it on repeat over and over again, and feel the potential of what’s to come in life’s next love, and be one with the patient reality revealed in the never-changing chords and pace of “Baby”—that in its right time, love will surely come to you.