Every great artist needs a great team, whether in the form of producers and session guitarists or simply friends offering support. In Footnotes, we ask some of those invaluable assisters to look back at tracks, tours and real life moments that define one of this issue’s featured artists. For Earl Sweatshirt, we caught up with Odd Future producers Matt Martians and Syd tha Kyd, who together make up The Internet, and video directors AG Rojas and Hiro Murai.
Earl Sweatshirt, “Earl” Earl (OFWGKTA 2010)

My producer’s cousin used to hang out with Earl, and we were making a music video and needed a kid to be in it, so we asked him. It didn’t work out, but as a result, I found his Myspace and thought it was like the best thing I’d ever heard. When he finished the Earl album six months later, I asked to make a video. I picked the single because it was short and I came up with the concept. On the day we were supposed to shoot it, we got a call from Earl, and he was like, “Yo, I can’t do it. My mom grounded me.” When we shot it the week after, he was on time, he was committed and he did his performance right. By that time, Odd Future was starting to develop an aesthetic of super dark, funny shit, and I think the “Earl” video solidified that, but they didn’t like the video when I showed it to them. Earl was into it, but Tyler didn’t want to release it. He thought it was going to be this real cinematic thing, even though I used their cameras. I wrote to Tyler and said, Dude, this video is going to help you out a lot. I put it on my Vimeo and it blew up from there.

MATT MARTIANS: When Thebe [Earl’s real name] first got back, we were texting. I was giving him words of encouragement, just being there when he wanted somebody to talk to. There was a lot of pressure coming from different directions. Randomly, one day, he called me to pick him up after school. SYD THA KYD: That was our first time seeing him. We picked him up from a Ralphs down the road. He was buying burger meat and bread, looking like he was up to something stupid. It was funny, because you could tell he was doing that on purpose. There were kids in the Ralphs that were like, “Whoa, is that Earl?” So we were trying to leave as fast as possible. We took him back to our apartment and sat there and talked. He hadn’t changed at all. If anything, he was more humble than before and a little bit taller. Everybody had missed him so much and nobody really knew what to say. At the same time, Thebe had his own plans and he was kinda scared, cause he didn’t want to disappoint anyone. [On “Chum,” he raps Been back a week and I already feel like calling it quits.] He came to us first, maybe cause I’m the girl of the group. I always had the mom swag.

MATT MARTIANS: After Thebe came home, we’d stay up all night and just listen to music. If we weren’t making music, Lil B was the most entertaining thing to listen to, and “Texas” is the song we were singing all the time. To my knowledge, Thebe has always been a Lil B fan. He likes Lil B cause he’s funny and Lil B can actually rap. Thebe knows Lil B can be technically really good when he wants to but chooses to be fun and to have fun. SYD THA KYD: The thing about Thebe is that he appreciates the wack of the wackest.

I helped produce “Hive.” Thebe was at me and Syd’s old house, where we had instruments. You could make anything you wanted at any time. We were messing around with a beat in Reason; it got kinda tight, then we started rapping. Next thing we know, Casey comes over with his crew, and there’s like 12 people in our living room, all rapping around Thebe. The mic is in the middle of the room, and Thebe is rapping in front of everybody. He does his verse in one take, then Casey does his. We made the beat, wrote the lyrics and recorded everything in three hours. Thebe works quickly in general: he gets his initial ideas out quickly, then goes back and makes adjustments. That’s a mature thing about his music-making. He knows what he wants to do and what kinds of feelings he wants to convey.

Traditionally with music videos, the label sends out a brief to directors they think would be good for the job. I wrote a treatment for “Chum” and they liked it, so I met up with Earl at Columbia’s offices. I didn’t know what to expect. Because of Tyler’s personality, I was thinking Earl would be this bombastic, high-energy guy, but he was the exact opposite. He was incredibly smart, if you can’t already tell from his lyrics, and very thoughtful and collected. When we were bouncing ideas back and forth, he had very specific taste. The video he referenced to me was a minimalistic, one-shot performance video for King Krule, and I remember thinking, Wow, this 18-year-old kid has really great taste. 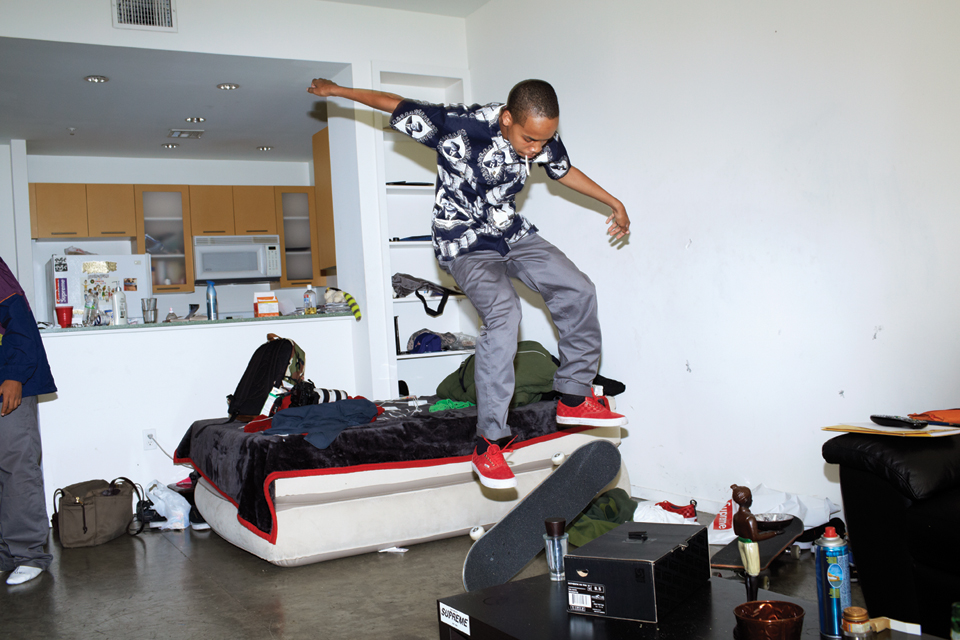