Live: African Summer Jam Gets off to a Bumpy but Bumping Start

This past Saturday, August 2nd, Nigerian superstar Davido [pictured above] headlined the first annual African Summer Jam in Manhattan's Grand Ballroom. It was a bit of a bumpy ride: sound quality degraded as the night wore on, the ballroom was never totally full, and the main floor's layout seemed to sap the energy of both artists and audience at times. Although the event was scheduled to end at 11pm, Davido didn't take the stage until two hours later. Nonetheless, for a low-profile event targeted at a core audience of Nigerian-American Afropop fans, the quality of the music—whether via DJs or performers—was enough to carry the night. Although this writer wasn't wearing heels during the marathon-length performance, so mileage may have varied.

Davido's headlining performance was one week after a high-profile appearance by WizKid at Manhattan's Irving Plaza. WizKid is seen—at least, in certain corners of online media and YouTube comment sections—as Davido's chief rival. With records like 2012's "Dami Duro," 2013's "Skelewu," and this summer's "Aye," Davido has become Africa's biggest pop superstar. WizKid, however, is close on his heels. It's also become apparent that WizKid must have a particularly savvy management situation. Irving Plaza is a mainstream venue, and he was joined on stage by Akon and Wale. He's been making the rounds, appearing on Instagram with Ty Dolla $ign and Big Sean, and has reportedly recorded songs with both Chris Brown and Rihanna. Davido may be Africa's biggest star, but for an American breakthrough, someone up there is gambling on WizKid.

In contrast, Davido's African Summer Jam performance was held in a traditional looking ballroom in Midtown that could easily have been the setting for a high school prom, and no American pop stars made appearances. On stage was a placard advertising an airline sponsor. In comparison to his shows in Africa, it felt like a secret. The audience, which couldn't have numbered more than two hundred 20 or 30somethings, was dressed to the nines. With an appearance by Nigeria's biggest superstar and ticket prices ranging from $50 to $100, it was an event, not a casual night out. (One VIP member, celebrating his birthday, danced through the show without even untying his tie.) The area in front of the stage was divided between press and VIP sections, which kept the mass of $50 ticket buyers hanging on the fence at a distance from the stage. By the time the show picked up, alcohol was flowing, and dancing had begun, this VIP section with its scattered glowing tables and beautiful dancers began to seem like the most exciting place in the building. 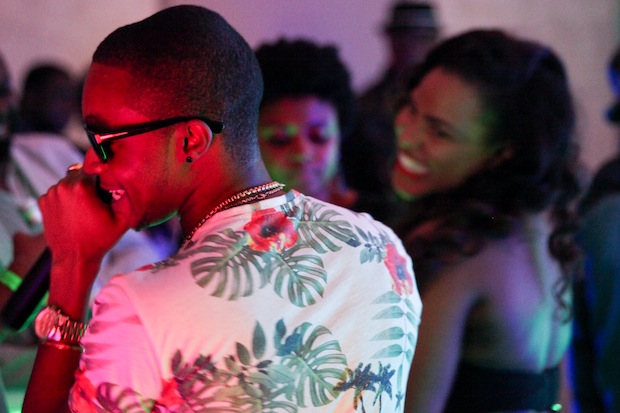 For the bulk of the evening, it was the DJs who kept things going. Certain performances dragged on, and not all of the artists seemed quite ready for prime time, although for a showcase, the audience was supportive. The first act to stand out wasn't even from Nigeria; the Brooklyn-based A'won Boyz trio, clad in matching floral outfits, moved in synchronized motion and had larger-than-life stage presence that put earlier acts to shame. ("It's amazing how much easier it is to photograph people who know they're being seen," remarked a cameraman.) They were followed by collaborator Ayo Jay, whose hit "Your Number" is a silky soca-style earworm, and whose delicate "Available" seems set to replicate that fate. A feathery singer of slight build, Ayo Jay had no problem jumping into the crowd while singing each seductive line.

Other performers weren't as lucky; one unfortunate hypeman's attempt to bring attention to a serious problem seemed especially ill-considered. "If you've heard of Ebola, make noise!" he shouted. The audience was quiet. Thinking the better of it, he rephrased for a "moment of silence." Nigerian dancehall artist Samini gave a performance with a live band, and while his commanding voice was unmatched by the other performers, increasing sound issues began to plague his set as it came to a close.

By the time Davido took the stage at 1AM—seven hours after the show began—the evening's natural momentum had already started to wane, although if anyone left early, it wasn't noticeable. There were some delays before he arrived, handled charmingly if awkwardly by the evening's MC. But once he finally hit the stage to the strains of "All of You," the energy level surged: his small stature feels congruent with his music's relentless energy and deft rhythms. He was magnanimous, pulling the birthday boy from VIP up with him and inviting the general admission audience to rush the stage through the VIP section, which they did, despite security's initial best efforts. With his fans' arms reaching upwards and the soundsystem beginning to mash the songs into shards, Davido ran through some of his biggest hits as the audience sang along. By the end, the beat dropped out and the entire room sang "Aye" back to his outstretched mic. Covered in sweat and appearing as exhausted as the fans who'd waited hours to see him—he said this was his sixth straight show in as many days—he effusively thanked everyone for sticking it out to see him, heartfelt in his appreciation.

music / News
Live: African Summer Jam Gets off to a Bumpy but Bumping Start