Around the World with A-Trak: New Years in Australia

Storytime! I went to Australia for a two week tour around the New Year and it was an action-packed adventure. I was thinking of recounting it all in iambic pentameter for dramatic purposes, but I couldn't even come up with one lousy stanza. So here is the story as I'd normally tell it.


I spent the Christmas holidays in New York and had a flight on the 27th to kick off the tour. Slight problem: on December 27th New York was hit with a massive blizzard, allegedly the 4th funkiest in all its history, or something like that. Even as a Canadian I was impressed. 20 inches of snow, serious winds, all things that are not friendly to air travel. My brother was also going to Australia for a tour at the same time as me, although we weren't doing the same shows. His flight was earlier than mine and luckily he made it out just before the storm hit. My flight was canceled. Then every flight was canceled… for many days ahead. It suddenly got very grim. Literally 1,000 flights got nixed that day in the New York region. I was informed that the only way I could make it out to Australia, aside from waiting 3 days and missing a bunch of shows, was to take a train to Washington DC the next morning, since it wasn't hit by the storm, and fly out of there. I accepted. 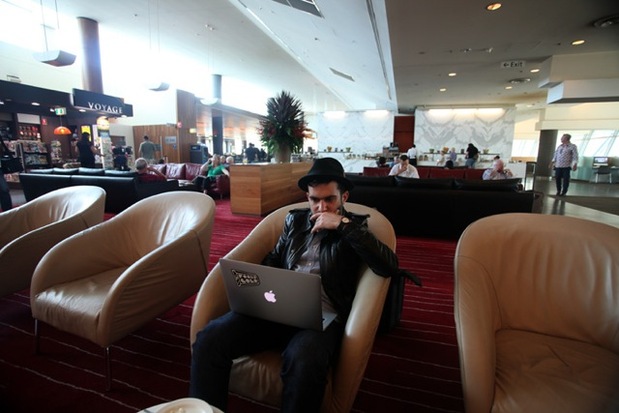 Thus my departure was pushed back by a day, so instead of getting to Australia the day before my first show to rest and get used to the time zone, I was now arriving on the day of action. I took a very early train to DC, allowing some time for snow delays as we left Gotham. I made the excellent decision of listening to the first 3 Mobb Deep albums in consecutive order during my travels, which was very wise, I must say. I flew from DC to LA. I remember getting to the gate at LAX, boarding the Melbourne flight and having the following thoughts: 1) whoa, it's nighttime, I've already been traveling for a full day and I'm still in America; 2) but can you believe it, I'm actually boarding a flight to Australia, finally; and 3) hey, how come no one told me this plane was making a stop in Sydney before Melbourne??? And just like that, I flew across the Pacific and walked off the plane in Sydney. This is when the delirium started setting in. And to be honest, it never really went away for the rest of the tour. I went to find the Star Alliance lounge and partook in a little bird bath. Then I flew to Melbourne. But that wasn't the end of the road yet. I was actually headed to Hobart, Tasmania, where the first show was scheduled. At the Melbourne airport I had a very cruel 5 hour layover. The only semblance of a silver lining was stumbling upon a wine tasting at one of the gates. Finally I got on that last plane and arrived in Hobart, exactly 40 hours after leaving New York.

I was playing Falls Festival, which I actually played 2 years ago when I did a similar tour at the same time of year which was also chronicled pon di blog and also started with tremendous travel woes. The first show was alright, I was in such a daze that I don't remember much of it, just that it was surprisingly cold for what was supposed to be summer. The next morning I really felt like crap-o-la. Our bodies are just not designed for that kind of wear-and-tear. It was also December 31st and that weirded me out—I did not feel like it was New Year's Eve at all! That night's show was in Lorne, a beach town 2 hours outside of Melbourne. So we flew to Melbourne and a driver took us to Lorne. That drive was so beautiful along the coast, it single-handedly turned my mood around and I was now in great spirits. Still, ringing in the new year felt strange that night. It was a great show, the huge crowd was a real pleasure to play for, so much so that I even extended my set. But while we were celebrating in Australia, it was still just the morning back home. So you want to send your wishes to all your friends, but if you do they're like "uh dude it's not New Year's yet". In fact my phone stopped working when I got to the festival, so I couldn't even write to my friends who were in Australia! When the clock struck midnight, Joan Jett was performing on the main stage. She actually did the countdown twice, I'm not sure if the first one was a false alarm or if she was trying to get the crowd more riled up, but whatever it was, it also added to the strangeness of the evening.

On the morning of the 1st, we made our way to Sydney for Field Day festival. The Chromeo guys were actually on the same flight as me, except they took a helicopter to get to the airport. That's when it started sinking in that we were all on the most insane travel routings imaginable. Field Day is always a great gig. That's typically where all the DJs and bands who are out in Australia at the same time get to reconvene for the first time. I had 2 sets that day: a very rare Duck Sauce performance, as well as a solo "hip hop set" on another stage. Duck Sauce was recently certified Platinum out there so they presented us with our plaques on camera. We brought out the giant inflatable duck. After those 2 sets, my proverbial tank was on Empty. 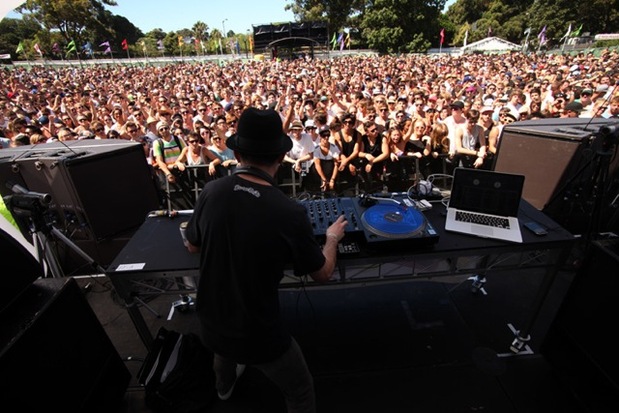 The next day was ridiculous too. First I flew to Gold Coast to play a festival in the daytime. Once we landed we were stuck in traffic for 2 hours. I got to my stage 4 minutes before the start of my set; played and then left right away. The set was actually great, but I almost forgot about it now because of everything around it. We had to go back to another airport, another 2 hour drive. And from there, got on a 5 hour evening flight to Perth to get ready for another drive in the morning. The craziest thing is, when I did get to a bed I couldn't even sleep well because my body was just too confused. In the morning a driver took us to Busselton, 3 hours away. This was show #5 in city #5 on day #5. That's rough. I finally went on and quickly realized that this crowd was completely bonkers. A couple friends told me I had a big smile on my face while I was playing. How could I not? These kids were endlessly crowdsurfing to disco house. What a pleasure. 5 minutes before the end of my timeslot, the stage manager came and told me to stop playing, pointing at something in the distance. He was actually pointing to a guy who climbed to the top of the scaffolding that holds up the tent, which was very high, and informed me that I had to talk him down on the mic. When did I sign up for this? I was really worried that the guy would jump or fall, he was dangling all over the place. For some reason I decided to promise him some ice cream. I was on the mic saying things like "You gotta come down dude, don't worry you're not gonna get arrested or anything. No one's upset. Just come down… We'll give you ice cream." I guess it worked. He made his way down. As he got closer to the ground the crowd started throwing beer cans at him, so then I had to calm THEM down. And finally he made it. Final song of the night: Cassius "I

After that show I was worried that I'd have a hard time sleeping again because we were staying out in the desert and I heard stories about big hairy spiders at our hotel. But even my arachnophobia couldn't stop me from snoozing at that point. I had a few much-needed days off, although I had to fly back to Sydney first, which is like an LA to NY flight. The good news was that my brother and I were off in Sydney at the same time. I'd go meet Dave at his hotel, maybe use the sauna a bit, he had a guitar in his room so he'd strum a few tunes for fun and then we'd go meet up with friends in town. On the 2nd day we all went on a boat cruise into Sydney Harbor with Boys Noize, Aeroplane, Beni and the N.E.R.D. guys. Two days off were not enough though, I was just starting to feel recharged. 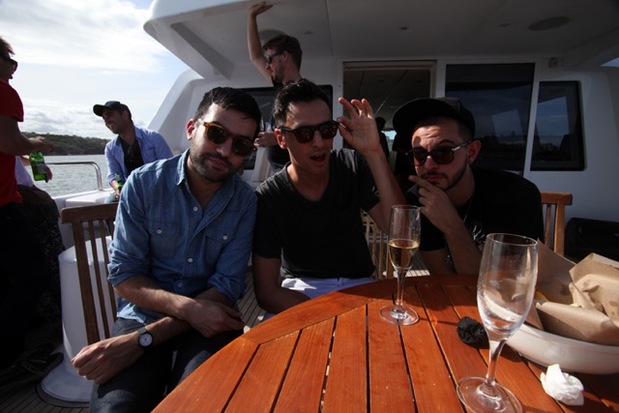 To finish off the tour, I played two club shows: one in Melbourne and one in Sydney. Those were a ton of fun for me. I played much longer sets than at festivals and I had way more latitude to zigzag into different genres and take the sets wherever I wanted. It was great to see these packed rooms full of kids wearing Fool's Gold or A-Trak tees, reacting just as much to hip hop as they did to house or old school classics or turntablism for that matter. I love improvising those types of sets, connecting the dots in my head and seeing where it takes me. On the evening of the last show I got an email from the airline saying that my flight home was canceled, although there were no weather problems this time. Luckily we were able to get me on another one despite it being sold out, and I crossed the equator, the international date line and the virtual dancefloor all the way into the U. S. of A. 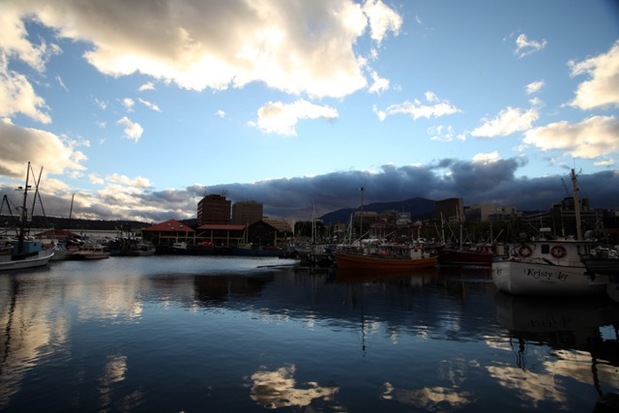 music / News
Around the World with A-Trak: New Years in Australia