FEATURE: The Stoned Cold Business of Being Wiz Khalifa

The Stoned Cold Business of Being Wiz Khalifa

If there was ever a question about Wiz Khalifa’s affinity for marijuana, the series of mixtapes he released while in major label limbo should put that to rest. Grow Season, Flight School, How Fly (with fellow weed connoisseur Curren$y), Burn After Rolling and Kush & Orange Juice are just a few, but listening to them in order chronicles Khalifa’s ascent from talented kid without much of a signature style to first class ganja enthusiast with an inexplicably unbeatable work ethic and ridiculous knack for hooks. On Kush & OJ, his most recent tape, Khalifa finally sounds completely at home, his Pittsburgh aggression toned into a voice that rests somewhere between the last few minutes before drifting off to sleep and a caffeine jag that sticks around just long enough for him to get a verse to tape. It’s a rare mixtape with a distinct sound from beginning to end. A delayed, romantic and weirdly sad vision of partying with girls, of partying with your bros, of what it means to never be anywhere but in your own head, even when you’re surrounded outside of it. “I didn’t want it to be sad, but it’s real mellow,” he says. “It’s just emotional.” 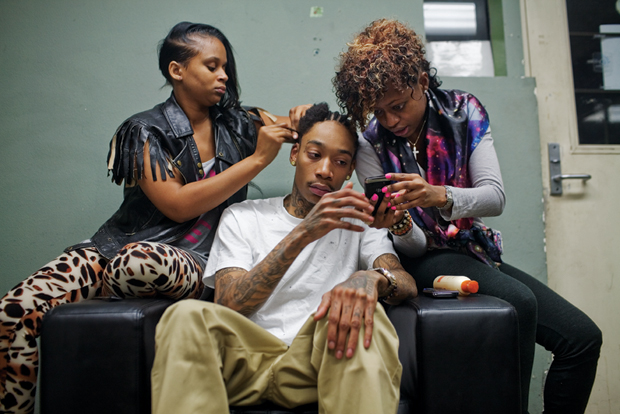 Khalifa is sprawled on his bed in the W on Hollywood where he’s been staying until he can move into his new apartment. His long legs dangle all the way to the very edge as he powers through a litany of interviews on his publicist’s speaker phone, rolling joints amid a pile of Starburst wrappers and weed crumbs that have fallen between his mattress and bed frame. In the corner there’s a room service cart with some congealed onion rings from the night before. In every other spare area there are boxes of clothes—unwrapped T-shirts, piles of fitteds and snapbacks, starchy jeans. Though probably not a budget necessity, Khalifa shares the room with his equally lanky tour manager and close friend Will Dzombak. He’s hunched over his laptop trying to get a handle on an advertised performance that Khalifa never agreed to, let alone even knew about. He is also rolling a joint. It smells like a college dorm room.

During his travels across LA’s sprawl for press appointments, the only real downtime Khalifa gets all day is in the backseat of the tinted-window SUV. Arriving at a radio station, Khalifa takes several minutes to get out of the car, his legs finally uncurling out the door like a giant spider emerging from a cloud of smoke. He fiddles with his hair, pulling at little knots of it and then covering it with a hat. It’s these calm moments when he collects himself, and then he’s in the door. His face lights up in a full grin. He’s out of his own head. He breezes through the carpeted halls, says his hellos, does more drops, does an interview, and then he’s back in the car, another joint ready to go.

At AOL’s eerily empty office for a video interview, he’s greeted by a gaggle of employees. They make him stand on couches, crowd him with cameras and lights. The photographer calmly repeats his count to three over and over like a mantra, before moving Khalifa onto the next backdrop. Later he will flirt with a radio host, and then follow up by complimenting her socks on Twitter. Through all this, he is never alone. “My business takes two people at least,” Khalifa says. “I always have Will or someone else with me. I’m high all the time, too, so I need somebody there that I can rely on that’s sharp, on point and going to conduct business like they’re me.” The more people he keeps around, the less chances there are for his façade to crack. It’s only after a grueling MTV interview that there’s any sign that he’s irritated. Sitting in a chair in a conference room at the W, bright lights, cameras and boom mics hanging over him like an HR Giger monster, he’s asked repeatedly about his life at 17. He can’t remember the movies he liked that year, 2004, and he didn’t have an especially exciting prom. He was basically just really, really into Cam’ron. He never entirely loses it, but this is one moment when his perpetually half-lidded eyes betray exhaustion. “When I’m high I can interact with anybody,” he says. “You can tell when I’m sober. The answers start to suck. It’s not so bad when it’s spread out, but when I got a day with a bunch of shit stacked on top of each other, it can get pretty repetitive.” Then he catches himself. “But I try to keep in mind that they don’t know what the last person interviewed me about, so I have to treat it like a fresh one.” 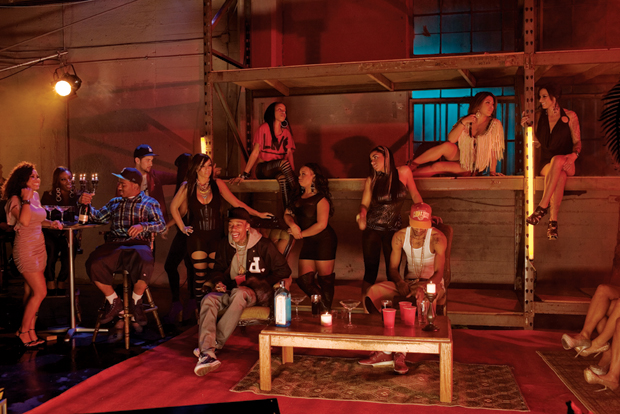 Khalifa’s entrance into nonstop promo came after his big break with “Black and Yellow,” an anthem to Pittsburgh that’s not so much about the Steelers as it is about Wiz Khalifa. When he raps Stay high like I’m supposed to do/ That crown underneath them clouds can’t get close to you/ And my car look unapproachable/ Super clean but it’s super mean, there is no hometown reference, but the mood is so ecstatic, Khalifa so happy to finally be able to rap about being a mid-level baller, that its ubiquity feels like a major music industry coup from a perpetual underdog. The moment when he’s realized he’s finally made it, and he wants to make sure everyone listening knows it too. But “Black and Yellow” isn’t popular just because of Khalifa, although his endless chorus of Black and yellow, black and yellow, black and yellow is so brilliantly catchy that a cursory YouTube search proves you can Mad Lib your way to novelty success by plugging just about anything you want to say to the melody. It was produced by Stargate, the heavyweight Norwegian duo behind numerous pop hits for artists like Rihanna and Ne-Yo, though not many rappers. On “Black and Yellow” they surround Khalifa’s voice with chimes, keys and a squiggly, playful bassline. So he molds himself to fit the instrumental, rather than just charging through everything with a singular style. Khalifa is canny enough to choose instrumentals with hit potential and meld his style accordingly. Though he’s a rapper, it’s what makes “Black and Yellow” a pop song and Khalifa a pop star. His greatest achievement is that he continues to be likeable, even in the face of major success. There is no possible way he’ll be able to please everyone, but he’s zoned in on the secret to longevity: being unconditionally himself, and having an acute awareness of what that means.

In high school, Khalifa wore Chuck Taylors, not because of a predilection for rock & roll cool, but because they were cheap shoes. His footwear preference remains unchanged by the limelight and is now mimicked by his growing legion of fans who’ve adopted the name The Taylor Gang. Anyone can be like Wiz Khalifa, because Wiz Khalifa is already like everyone. Though many also wear Chucks and use a shoelace for a belt, none of that is actually necessary for induction. “Everybody wants to be a part of something,” Khalifa says. “It’s so easy to be a part of. That’s my attitude anyway. I would never personally try to fit in. I always want to be myself. You don’t even gotta wear the shoes. It’s just how you live. Don’t live beyond your means. If someone loves my music and they love me, all they gotta do is grow their hair out, wear some Chucks and some clothes that fit, and some chick will be like, ‘You look like Wiz!’ It’s achievable. I remember when I was growing up, seeing people I looked up to, I felt like I couldn’t be them. I still get a lot of shit because I go to clubs with hoodies and shorts. Man, shut up. I can rap better than everybody in here and my album’s going to sell more. It’s about being yourself, that’s what people respect in the end.” And that is as aggressive as Khalifa gets. He’s painfully aware of his impact on the younger generation, even though he’ll make your kids stink like weed for eternity if he gets remotely close to them. “I feel somewhat of a responsibility. You know what’s right and you know what’s wrong,” he says. “Even though I smoke weed and cuss and rap about getting bitches—that’s me. I never tell anybody to do that. There are certain ways you can say things, or certain things you can make seem cool, and I’m not into that. I don’t tell people to drink underage. I drank when I was underage, but I don’t say, ‘Yo, fucking sneak in the club and drink something right now.’ I don’t want people to do that. You can listen to me while you do that, but I’m not going to be the one to tell you to do that.” He’s like a formerly rebellious parent telling his children to use their best judgment while fully acknowledging he never did himself. He’s been cast into public prominence, and every move he makes from now on will either propel him further, or push him back. 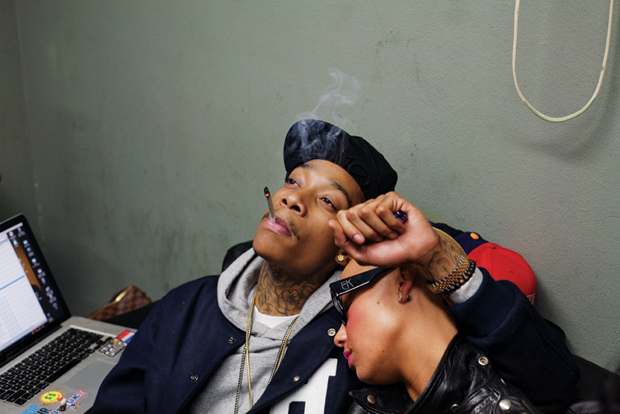 True love, marriage of convenience, a side effect of celebrity or all three, Khalifa has recently been dating Amber Rose, best known as Kanye West’s ex-girlfriend. There’s paparazzi videos of them walking down the street together. The fact that there are paparazzi around him at all is something Khalifa pretends to be unexcited by, but back in his hotel room, when he watches a video of himself leaving a club, he turns his laptop screen toward Dzombak so he can get a better view.

If the Amber Rose thing brings up a lot of questions, it should. Is Khalifa on the same track as Kanye West? Will fame erode away the everyman vibe he has so carefully cultivated? What will happen when he really starts making serious money? Look at Kanye West—once a quintessentially relatable rapper, he’s now one of the biggest, most attractively egomaniacal stars in the world. “People are going to grow with me. Wherever I end up, I think they’ll understand it,” Khalifa says. “I can’t say I’m not going to want to dress more expensive, but whatever I do, people will have the choice to follow it. I’m trying to become a household name and be a worldwide sensation and make a lot of money while I’m doing it and make other people a lot of money as well. I love music but I can’t say I love the music business. I like doing business and profiting off of the fucking dream. I could be working at any place, I could be selling cars instead of buying them.” So maybe nothing will change, or maybe we’ll all somehow get rich off Wiz Khalifa. Or maybe like Kanye, he’ll be able to make us feel like we’re growing with him. The beauty of Khalifa is that when he says he’s not really concerned about any of that, you can’t do anything but believe him, because he’s never shown us otherwise.

Back in the car, the Hollywood Hills loom close in the windshield as evening streetlights flicker on. The radio is faint in the background and the DJ says something about a “pop artist.” Khalifa drops one of his signature stoner cackles before launching into a chant of, “I’m a pot artist, I’m a pot star.” Nobody else laughs, but he doesn’t care. He keeps doing it, and the more he does it, the funnier it gets until, pretty soon, everyone laughs right along with him.