With a raw, reflective solo album, Jenny Lewis starts to open up.

Philippe’s Original sits on a corner a few blocks over from Dodger Stadium in downtown Los Angeles. It’s a deli counter restaurant old-school enough to get its own municipal landmark sign (“…since 1908”), specializing in gravy-dipped sandwiches, ten-cent cups of coffee and sawdust on the floor. Jenny Lewis picked this spot, and explains that she’s been coming here since childhood. “My friends would have eating contests, coffee-drinking contests, water-drinking contests,” she says, before instructing me to get the turkey-dipped over the beef. We carry the cheapest, tastiest meals in LA to the empty cafeteria upstairs, where thousands of names and sayings—but mostly just names—are scrawled and chipped and keyed along Philippe’s brown brick walls. Couples in hearts, curses, phone numbers, so-and-so-was-heres. “There’s so many lives on this wall,” Lewis says almost the second we sit down. “That guy’s name was Snivel. Could you imagine what Snivel’s story must be like?” When I ask if she’s ever put her own name up on the wall in twenty-odd years of inexpensive lunching, the response is a quick negative. “There’s no room left,” she explains. “Isn’t that bad tagging etiquette? I wouldn’t want to write over anybody else’s name.”

Jenny Lewis’s record Rabbit Fur Coat is her first solo album in almost a decade of writing and recording with her band, Rilo Kiley. As to be expected, it is a far starker affair than Kiley’s studio work. Many songs are constructed from little more than an acoustic guitar and Lewis’s vocals, which are fuller and more emotive than ever before. The stripped-down approach forces her lyrics even further into the spotlight. Every reference to lovers, mothers and God, every yearning lament or indictment—it all comes across as raw and intimate on the record as if Lewis was there whispering it into your headphones herself. Yet for someone who’s committed such an irrefutably private, vulnerable work to tape for the express purpose of sharing it with others, Lewis remains extremely guarded about the details. Our lunch conversation would drift into everything from critiques of Wes Anderson’s “hipster-friendliness” to Lewis’s love of Freestyle Fellowship (“Come on, Inner City Griots was great!”), but every time the subject turned back to matters of autobiography, or the experiences and soul searching that Rabbit Fur Coat wouldn’t exist without, I’d have to make do with drawing my own conclusions. “It is a personal record in a lot of ways,” Lewis would later admit. “But I don’t intend on giving up my sources or outing myself.” 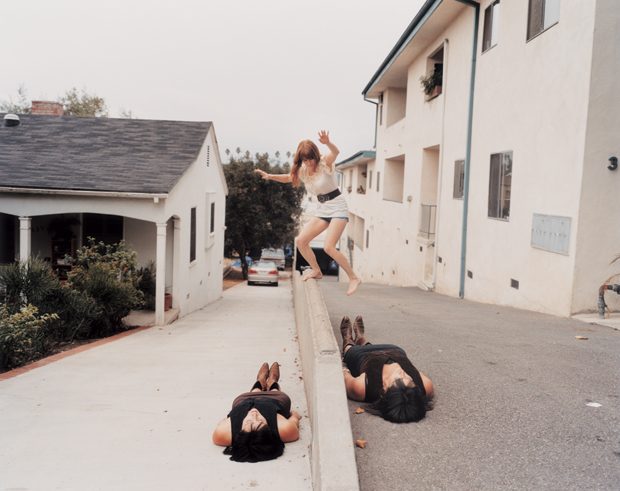 Nearly every story ever written about Rilo Kiley grounds the band’s music in the fact that Jenny Lewis and guitarist/co-songwriter Blake Sennett got their start as child actors, filming movies like Troop Beverly Hills and Nickelodeon’s tween comedy Salute Your Shorts. But Lewis is quick to downplay her early employment. “When I was making movies, I was a kid,” she says, before copping to a “normal, suburban upbringing” in the Valley filled with formative musical experiences like discovering rap (“I had all my mom’s records, but KRS-One, NWA—that was the first thing that felt like my own”) and obsessively collecting Sub Pop and Up! 7-inch records. Lewis began writing music of her own as a teen, when she got a guitar as a Christmas present—an electric that she demanded be returned to Guitar Center for an acoustic one. “I wanted to make folk songs. The first song I learned was [The Eagles’] ‘Desperado’—and then I wrote about ten songs with the same chords,” she says. “My mother’s boyfriend at the time taught me guitar. And then I wrote a song called ‘You Can’t Trust Men Of Today.’ Actually, I wrote that with my best friend. I can’t take full credit for such a work of…pure genius.” She continued to maintain thick notebooks of ideas, trying out “folk songs with strange lyrical meter, probably because of the hip-hop stuff I was listening to. The songs were just far too wordy. And terrible. I don’t know if I’ve improved much.” After some early stabs at 4-track demos with Sennett, their friends were drafted to make up the rest of the band, and Rilo Kiley was born.

The group spent most of the late ’90s doing what indie bands in Los Angeles are supposed to: befriend other bands, record songs at home, play Spaceland in Silver Lake a whole lot. But a chance tour experience re-routed the Rilo Kiley comet. When Superchunk’s original choice for tour support couldn’t come to America in the winter after 9/11, Rilo Kiley took the slot and embarked upon their first national jaunt, supporting their debut album Take Offs And Landings. The other opener was Omaha, Nebraska’s the Good Life, whose frontman Tim Kasher quickly befriended Lewis and the rest of Rilo Kiley. When their rock caravan passed through Omaha on a day-off for travel, Kasher introduced the band to his friends, who included the staff and bands of Saddle Creek records, and the label’s ubiquitous producer, Mike Mogis. The band felt right at home, and left Los Angeles to record their second album, The Execution Of All Things at Mogis’s studio in nearby Lincoln. During this time, Lewis and Sennett, who had shared a romantic relationship almost as long as their songwriting one, were in the midst of a prolonged break-up (“I’m telling you, it was all because he hated black licorice,” Lewis now jokes). While that tension can be felt throughout the record, the emphasis seemed to be on obliquely literate vignettes like “The Good That Won’t Come Out”—Let’s get together and talk about the modern age… Let’s talk about all of our friends who lost the war, and all the novels that have yet to be written about them—instead of obvious “boy/girl” songs. On Rilo Kiley’s latest, More Adventurous, Lewis’s vocals and storytelling acuity were stronger than ever, but for the most part, she seemed to be singing about a collection of distinct characters—married women and mistresses, presidents and assholes, “Diana and Jim”—rather than herself. 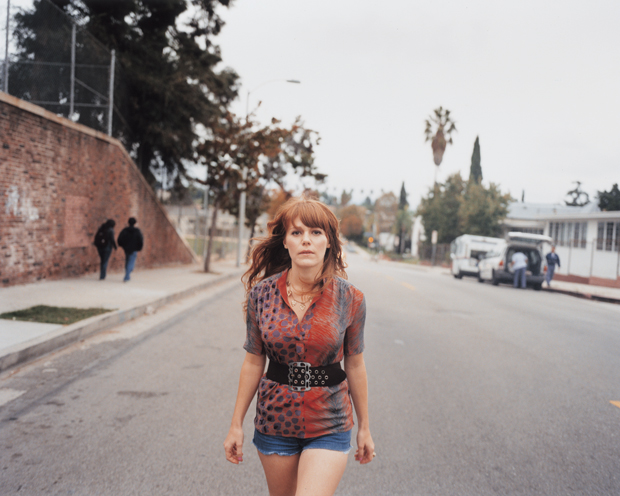 What difference does it make if Jenny Lewis is singing about Jenny Lewis, or someone else, a composite of the two or a completely imaginary construct? The simple answer is that Lewis is a captivating presence—whether it’s the country-inflected voice on record, or the five-foot dynamo in oversized sunglasses and slouchy cowboy boots throwing extra-hot mustard on her gravy sandwich at Philippe’s. As a group, Rilo Kiley has garnered a steadily increasing amount of acclaim and attention, and nearly all of it has been centered around Lewis’s singular allure. With her in the foreground, every one of the band’s releases has been a bigger deal than the one before it, taking Rilo Kiley from homemade CDs, to Barsuk and Saddle Creek, to the band’s current contract with Warner Brothers. Yet that would be a
somewhat straightforward tale of success, if it didn’t correlate so closely with how indie rock as a whole infiltrated mainstream pop culture over the first half of this decade. Modest Mouse went from warped Pacific northwest troubadours to platinum artists when their single “Float On” hit. The Shins sold hundreds of thousands of records when their songs became plot points in Hollywood films. Once-obscure favorites like Death Cab For Cutie found themselves namedropped on network dramas and soundtracking car commercials; the Postal Service, a Death Cab side project of which Lewis was a member, sold over half a million copies of their debut, Give Up.

As one of the lone female voices in this bespectacled, sweatered takeover, Jenny Lewis can’t help but stand out (the Village Voice hinged a profile on the band around the somewhat crass assertion that “Lewis is such a wet dream for indie boys—pretty, bright, likes men, says ‘fuck’ a lot.”) which only makes her creative decisions more striking. Rabbit Fur Coat doesn’t sound like anything by her contemporaries—its conception is based on It’s Gonna Take A Miracle, a 1971 album by Laura Nyro and LaBelle where classic pop melodies intertwine with gospel harmonies (Lewis enlisted LA’s Watson Twins to stand in as her own version of Patti and Co), with throwback sonics from producers Mike Mogis and one-time Rilo Kiley touring partner M Ward. “We kept it real simple, and that goes back to an era that I really love,” she says. “We made a record in the way that my understanding is of how they did it in the ’70s.” “Born Secular” and “Rise Up With Fists!” are country soul dispatches from a search for God, informed by equal helpings of Patsy Cline, Phil Spector’s girl groups and Don Henley. Jaw-dropping opener “Run Devil Run” is nothing but multi-tracked vocals—a tribute to Miracle intro “I Met Him On A Sunday”—and where Nyro’s album featured Brill Building cover songs, Lewis enlisted her friends and fellow indie luminaries for a cover of the Travelling Willburys’ “Handle With Care”. Ward takes the Jeff Lynne parts, Ben Gibbard handles the Roy Orbison lines, and Conor Oberst stands in for Bob Dylan, but Lewis keeps all George Harrison’s kickers for herself: Been beat up and battered ‘round/ Been sent up, and I’ve been shot down/ You’re the best thing that I’ve ever found/ Handle me with care. 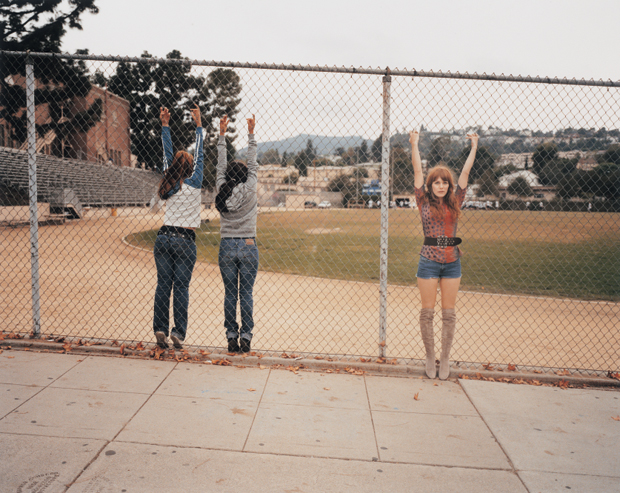 The songs and subjects on Rabbit Fur Coat are as straightforward as the slap-echo production—often hauntingly so—almost in response to the indirect narratives of past records. “I feel terminally unsatisfied,” says Lewis of her recorded output. “It took me a while to figure out what I sound like, and what I want to say. It’s a learning process, becoming uninhibited. But I guess I feel alright about this record—it’s as honest as I’ve been.” On “You Are What You Love” she sings, I’m fraudulent/ A thief at best/ A coward who paints a bullshit canvas/ Things that will never happen to me. The album’s title track tells the story of growing up “a hundred-thousand dollar kid” with a mother in a “gold-plated body cast.” It’s a finger-picked, heartbreaking tale (recorded in a single take) where Lewis brings herself almost to tears. “The song is mostly fictional,” Lewis insists. “You know, I don’t really want to talk about my personal experiences growing up—but I open myself up when I reference them. It’s up to the listener—I just wrote these songs and I’m putting them out there.”

After talking about the record, we head to nearby Olivera Street, which recently served as the backdrop for Beck’s mariachi-meets-Mad magazine clip for “Girl”. The festival for El Dia De Los Muertos is in full swing, but Lewis just wants to pick up a pair of huaraches. She tells a bunch of great stories—about everything from L Ron Hubbard and blind dates at the Scientology center, to bringing Rilo Kiley bassist Pierre de Reeder’s daughter out on tour—and perhaps even gets ideas for future ones while poring over the lovingly crafted memorials posted throughout the courtyard at the end of the street. Yet as far as Lewis’s stories on Rabbit are concerned, the record itself is as far as she’ll go. “Sometimes I’ll fess up to songs, sometimes I’ll lie about them,” she later explains. “It’s embarrassing to play a song at a show, and the person you wrote the song about is standing there. They probably have no idea that the song is about them, but why admit to it? Why ever tell them?”