In 2007, one year before Wale released his beloved, Seinfeld-sampling Mixtape About Nothing, Nick Barat profiled the rising pride of Washington, DC in FADER, calling him a “baby Kanye West … a supersized personality in golden Nikes ready to take over the world.” Wale rallied a nascent music blogosphere with his timely gift for cross-genre appeal, cleverly rapping over rock songs and dance beats with allusion-heavy lyrics that blurred sneaker connoisseurship and backpacker nerdery. But his debut album on Interscope was a commercial failure, a cautionary tale remembered mostly for its lone, ill-advised single featuring Lady Gaga’s first and final half-assed hip-hop guest appearance. This year Wale unexpectedly joined Rick Ross’ Maybach Music, becoming the first in a series of hard-to-market, lyric-obsessed artists to be shepherded by one of the genre’s most consistent top sellers. Here, in his own words, Wale takes us through the past few years, sharing a lucid self-analysis of the ups and downs that brought him to the doorstep of releasing his second album, Ambition, this winter. He’s got a talent for talking about himself. This time, will it sell?

I was the first of a new generation to get an opportunity to drop an album. I was the first of a wave, a guinea pig in some ways. You’ve got this guy, and they thought at the time what people wanted to hear from an artist was singles and pop records. I’m just a kid with a record deal. I’m not trying to be that disgruntled, angry rapper. I want to make everybody happy. So over the course of a couple months, I’m touring all over the country, doing interviews wearing argyle socks because I was told. Just trying to be the guy that was easy to deal with. I was trying to make my label happy more than my fans.

I’ve got factual facts that my album was under-shipped and we could have done way more, but I put it on myself. Wale why wasn’t you hot enough? What did you do? Maybe I shouldn’t have been so scared to speak up. Maybe I should’ve showed them what was in my heart more. Maybe I should have included the people who helped me get to where I’m at. Maybe I should have tried to tongue-kiss Rocsi on 106 & Park. It was so new to me. I was so young and ambitious and scared, just not wanting to fail. I did it their way. You can’t live with that. How do you live with yourself doing it somebody else’s way? If you fail, you’re going to hate yourself for letting them convince you, and you’re going to hate them for giving you the wrong path. 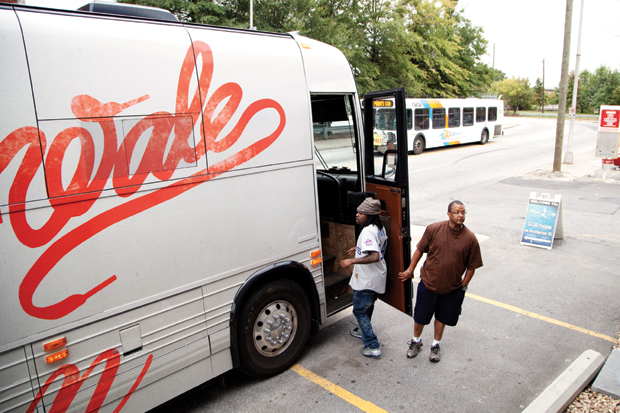 When I left Interscope I was down. Where’s the fans that say they love me? Where’s the media? Where they at? Pitchfork hurt my feelings, to be honest. I’m not going to lie, it hurt my feelings for real. I had to stop reading it. The sick, sick part of my mind lives to feel validated when other people enjoy my music. But this generation is so enamored with the new thing that everything becomes old quickly. When it’s old and it’s not classic yet, they’ll bash that shit so you don’t care for it anymore. Let’s not make this shit professional boxing. Let’s let us youngins be great. Give us the same shot that Jay needed to connect with Reasonable Doubt when everybody lamed out the first time he put it out. Stop trying to overanalyze, stop trying to contort the minds of listeners. They don’t need that. Let Drake be good without talking about Degrassi. I don’t know if it has to do with music, honestly. I think they don’t want to like it.

It jaded me, man. I became more sensitive. Niggas ain’t your friend. Lady Gaga ain’t my friend. We at the “Chillin’” video shoot talking like we friends, then we at the awards and she walked right past. She got seven, eight, nine number one records and the record we made never worked. “Why should I still care about Wale? His record sold 28,000.” But in the studio we was homies. That was my first lesson. Not that I thought I’d be taking fucking shots of Ciroc with Lady Gaga on a Friday night watching SVU, but put it this way: friendships fluctuate with how hot you are or how cold you are in the industry.

That foreword, I’m still on that page. I gotta get to chapter one. I’ve gotta prove to the people that I’m worthy of they time. I want to be the dude whose dreads smell like champagne at the end of the night. I don’t want to be the dude in bed with his girl, not wanting to talk to his homies, all he want to do is smoke a blunt and watch SportsCenter. My hunger is that of a person trying to be heard by Russell, by Jimmy. But those niggas don’t matter to me anymore. My Russell Simmons and my Jimmy Iovines lie in the earlobes of every fucking person that has iTunes and has a fucking heart and a head to decipher lyrics. The same passion I had when I met with Jay-Z the first time, playing him my demo, that’s how I feel. My heart is racing for my album to drop. I’m sick. I went to the doctor for anxiety. This ain’t no joke. They tried to give me Vistaril and shit. I ain’t sleeping. I think about it every day, every waking moment. I don’t even talk. A little part of me thinks I can change these niggas from hating. Is this going to be the day we win these people over? Is this going to be the day they call a music snob aficionado emergency meeting and are like, Holy shit, I fucking love Wale again?