As our recent Black Hippy cover story showed, the Los Angeles rap quartet is a complex compound of several moving parts. None, perhaps, more complex than Ab-Soul. Perpetually hidden behind a pair of shades (he suffers from light sensitivity), Soul stands as something of an enigma. He's every bit as talented as his peers, but he's the least established among them. And yet he often seems like the most traditionally charismatic. Fellow Hippy Schoolboy Q calls him a genius but tends to clown him lightly and constantly—even during this interview. Nevertheless we did have a chance to chop it up at length with Soul while putting the article together. Over a bowl of Korean carry out, he spoke on growing up in a record store, the end of regional rap and the struggle of not having to struggle.

You seem to operate on a different wavelength than the rest of the crew. AB-SOUL: They're all from the hood and I'm from the suburbs so I'm kind of an outcast. I can't really relate as much with them. When you listen to their music and shit it's so much tougher, you know what I mean? So they kinda give me a lot of problems like I'm not down. SCHOOLBOY Q: Gay ass dog doing an interview... AB-SOUL: Fuck you bitch! Get you a date, get you a release date. Your release date got date raped.

How did you fall in with these guys? AB SOUL: [Through my producer] Soundwave. Soundwave is my homie's cousin. When I first started rapping he was making beats early on the Playstation MTV Music Generator. He started messing with [Top Dawg Entertainment] and eventually brought me along. Once he got over there he brought me in and they kept me in.

What kind of music were you listening to growing up? It was awkward man because I grew up in a family owned record store. Magic Disc Music. So I heard everything but for a long time I wasn't really into music like that. It was just kinda something that we sold. When I first really started getting into rap I was listening to like Twista and Bone Thugs and shit like that but once I started rapping around 12 or 13 I couldn't really catch that fast pace so then I got into Canibus and shit. The real like… Eminem, Jay-Z. Those types of rappers. Real intricate, witty. I just kinda kept that and it was some real shit to do. I used to text battle online.

Wow, you really are from the suburbs. Yeah, yeah for real! Online early. Carson is… I'm not gonna say it's completely silver spoon. You got your fair share of [rough] shit but it's not as harsh as Compton or South Central.

Do your folks still have the record store? We actually just closed this April. It's ironic—I'm still trying to rap, I'm still trying to sell records. My Grandpa's been in business for over 30 years so they had a good run. And they're still selling stuff online, still moving forward there. I'm honestly happy to get up out of that shit, tired of going to work every day and shit. [We] do all that from the house now. It's the day and times.

I always liked going to record stores though. Yeah it's classic and you still got your Amoebas and shit, those big spots. But the independent stores took a hard blow. It is what it is. We've been in business forever. The VIP Long Beach is still open though, that's my uncle's shop. That's where Snoop recorded his first demo. SCHOOLBOY Q: Don't nobody want to go to that shop! AB-SOUL: Shut your ass up while I'm doing my interview with FADER. This my life, my nigga! This all I got, bitch! They doing bailbonds over there and shit, they ain't even selling records. That's the way that it is though. SCHOOLBOY Q: They a white tee shop. Long Beach V-I -Tee. [Shortly after this interview was conducted, it was announced that VIP will also be shutting down soon.]

What are your long term plans, career wise? AB-SOUL: All I really want to do is be mentioned with those guys when they talk about rap. If you talk about rap and shit and say Jay-Z, Ab-Soul, Eminem. If I hear some shit like that I'm sure I'll be rich and wealthy and shit. I'm just focused on that.

Do these guys influence you to step up your game? Yeah absolutely. You have to understand I have the most difficult job. Hip-hop came out of the streets. It originated out of the streets. Struggle. It's [about] telling those testimonials, making something from nothing. So me surrounding myself with all of these guys that had that fair share of that struggle and I'm pretty much damn near…me and Dave [Free, President/GM of TDE], we from Carson. He don't like to admit it but we pretty much had silver spoons on the low. I wasn't rich by any means but I wasn't ever starving at all. So just finding shit to connect with people about other than the typical is definitely a challenge. And still trying to connect with [these] guys too, still being able to rock after them too and get my point across.

Yeah how does someone who comes to the crew through Jay Rock or Q, with a more street mentality, respond to your music? I mean I think everybody's been receiving me the way I like. I've been out here in the LA area meeting people and real tough guys who think this shit is dope. I feel like you just keep it real and really keep it real. With rap you always gotta exaggerate things to paint it well but if you just keep it real I think everybody will mess with it no matter what you do. If you just watch porn all day, come up with a creative way to talk about that shit they'll fuck with it. 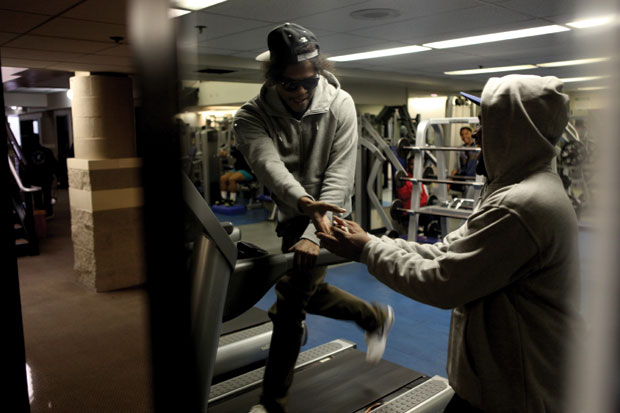 Who are some of the other rappers you draw influence from? I respect Jay-Z the most, all and all. I feel like he just really covered everything evenly. It wasn't too much of nothing and not too little of anything. So Jay, Lupe, Biggie, Pac ain't really have enough of them rapper lines for me. You know what I'm saying? That rapper shit.

Well that's some East Coast shit. Right, some East Coast shit. And how I started listening to rap caused me to miss out on a lot of that. I kinda missed that whole shit, I started rapping after all that shit. I remember working at a record shop and Tupac died and we were selling all the CDs. People were crying and shit. Now I'm trying to be a rapper and he was like really one of those guys. I kinda wish I was like… you know how everybody be saying they have an uncle or somebody that was just playing all that shit? I had none of that. When we'd close up the record shop it was silence at my house. It was just a business. Everybody listens to music, you know, but it definitely wasn't like that. You listen to that shit all day long, you get your eight hours of music a day and you might not want to listen to nothing when you get home. But that shit came in handy when I started really getting into it because I had access right there. I could go back and get all the shit.

Do you study a lot of the classics then? Yeah definitely. I think that's what we are in essence. Us in general, we're really a collective of everybody that's done it old and new.

It seems like you guys aren't into very much West Coast rap at all. AB-SOUL: That's the thing today. It's all about changing your dynamic. Drake is from up north, he rap like he from down south. ASAP [Rocky] from New York but he rap like he from down south. They say we rap like we're from the East Coast. It's all about that shifting dynamic. You at ASAP and he look like a nigga from over here. You throw in all these different clashes of culture that people wouldn't expect. We've got Q right here, he's a real Crip gangsta. A real one for real. And he's into high fashion and shit. This nigga wear Levi's jackets and shit. If you were to see him out you might not know he's a gangsta, he might look like a pretty boy. It's just different cultures, clashing of culture. I'm talking about just exchanging ideas. I think we're really starting to understand that ain't nothing new. It's nothing that ain't been done. So really you gotta try to think outside of the box.

Everyone else speaks quite highly of your intelligence. Q called you the Albert Einstein of the crew. Yes. I got a large vocabulary for whatever reason, you know what I mean? I don't really read a lot, I just listen a lot. [Q keeps talking shit, unintelligible] Aye I taught Q how to rap too, make sure you print that. Me and Kendrick we taught him how to rap! He just started rapping like four or five years ago. And since he keep talking know that I'mma sell more than him every time I put something out. Print that. SCHOOLBOY Q: Aye cuz I heard the conscious department at Interscope was looking to sign some conscious rappers. AB-SOUL: They got that bread? We'll talk about it. We'll put it together.

Is there a message to your music? I don't even have no direct message, I try to talk about shit that effects everyday people. I'm just trying to share this information that I got, put it out there. You can agree with it, disagree with it, hold a debate about it.

Do you have siblings? Yeah.

So you're used to being given a hard time? No, I'm actually the oldest so I don't hear no shit from them. Just these guys. Everybody else thinks I'm the tightest in the world, these guys… I don't know. You can't show weakness. That's street shit if you didn't know that. You gotta be tough about it.

Primavera Sound 2022 made up for lost time