Real Estate’s role as suburban New Jersey’s jangle-pop poet laureates has been greatly exaggerated—at least according to the band’s guitarist, Matt Mondanile. “It’s cool that we’re from where we’re from, but all of that has definitely been overstated,” he says, phoning from his current home in Greenpoint, Brooklyn. He makes no mention of The Feelies, Real Estate’s Garden State brethren, to whom the band is often compared, but gushes about a few out-there rock innovators from across the pond: Franco Falsini, the impressionistic Sensations’ Fix guitarist, and Martin Newell, the founder of moody UK lo-fi legends Cleaners From Venus. The lyrics and sound of Real Estate’s breakout record, Days, may evoke aimless late-night drives, quiet municipalities and white picket fences, but it’s always been Mondanile’s distinct riffage—spacey, weightless and gently psychedelic—that gives the songs thier otherworldly edge. It also provides the underlying spirit for all of his solo efforts.

Still, The Flower Lane, Mondanile’s loose, lush new solo record as Ducktails, maintains a certain small-town vibe. “I loved recording at Gary’s Electric Studio [in Brooklyn] because it’s like four or five blocks from my house, so every day I’d get out of bed and spend about 12 hours there. I’ve always wanted to do a record like that,” says Mondanile, sounding a little groggy despite the fact that it’s close to noon. The Flower Lane is the first Ducktails album recorded in a proper studio, and its pristine sonics (due, in part, to engineer Al Carson) and eclectic style are a far cry from the murky bedroom pop of his self-recorded 2009 debut, Landscapes. Thanks to Gary’s convenient location, the studio became like a makeshift living room, where friends could drop by, hang out and lay down a track if they felt like it. “People would just walk into the studio and see how they could change the record. I’d spent so much time recording by myself, so I thought this would be something different.” 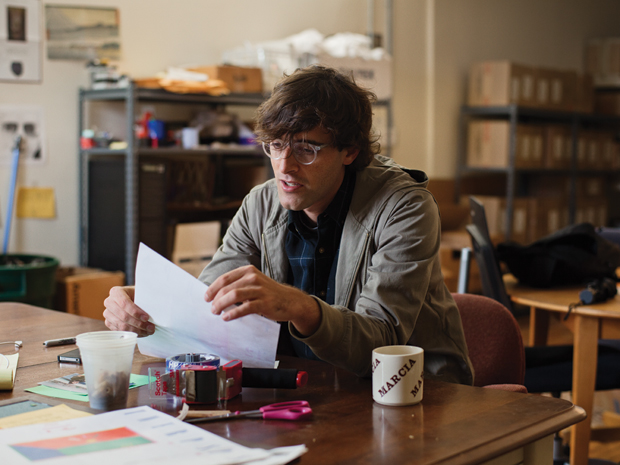 Of course, it helps when the friends dropping by happen to be accomplished musicians in their own right. Daniel Lopatin, who performs as Oneohtrix Point Never, adds some of his signature synth flourishes to The Flower Lane; Madeline Follin from Cults sings on the gorgeously languid standout “Sedan Magic” (according to Mondanile, “her voice has a Stevie Nicks vibe that I really like”) and the addition of Outer Limits’ Sam Mehran makes “Assistant Director” sound like an intergalactic guitar duel. “He took that song in a whole new direction,” Mondanile says. And that wasn’t an uncommon experience. “Most of the time, we wrote the songs in the studio,” he says. “There are challenges that come with that, but it was also really exciting, throwing down an idea and seeing where it goes. We were always discovering something new.”

Though he still considers Ducktails a solo project, Mondanile says it’ll keep changing as he finds inspiration from sources near and far, from the distant heroes of his
record collection to whomever happens to show up on his couch. In the end, he likes to think of The Flower Lane as a snapshot. “With any record for me, it’s like a document of a time. I want to look back on each one and think, That’s that time in my life when I was doing that, feeling that. So it’s always going to evolve. Each record is going to be a little different.”

The Flower Lane is out January 29 on Domino. Mondanile, his new band and their assorted collaborators will perform the album tonight at Le Poisson Rouge in New York. Buy tickets now or stream the show, beginning at 10:30PM EST, here. Watch Ducktails play album cut "Under Cover" at the FADER #83 release party: