Shout out to all the Bumbershoot moms with rat tails and billowy crew neck festival sweatshirts. Shout out to Bumbershoot for having more food options than music stages. And also shout out to Bumbershoot and Budweiser for positioning their beer gardens so that you can see any given stage best from behind their white fences. Any way you look at it, the people that put on this festival are all about making sure that adults and kids are able to rage with full bellies and sound minds.


Growing up in Seattle, Bumbershoot was the place to go to see just about every band ever, whether you liked them or just kind of recognized their name and needed to kill thirty minutes before seeing Violent Femmes or Live or whatever on the mainstage. In past years (like, um, the mid-'90s) Bumbershoot seemed to be all about a good overview of what was going on in alternative popular music at the time. We witnessed the return of ska there, and also the swing resurgence—but honestly can we just get it out there once and for all that that was not at all fun even at the time. WHAT A RELIEF TO FINALLY SAY THAT. Anyway! Bumbershoot 2010.

Typically, it was vaguely warm but mostly overcast when we arrived at the festival. Most attendees were wandering around in a daze trying to figure out what they wanted to see and where it was. Bumbershoot stages are spread all around the grounds of the Seattle Center, which sits in the shadow of the Space Needle, and although it's not the hugest space ever, it still takes some familiarity to navigate the scene. 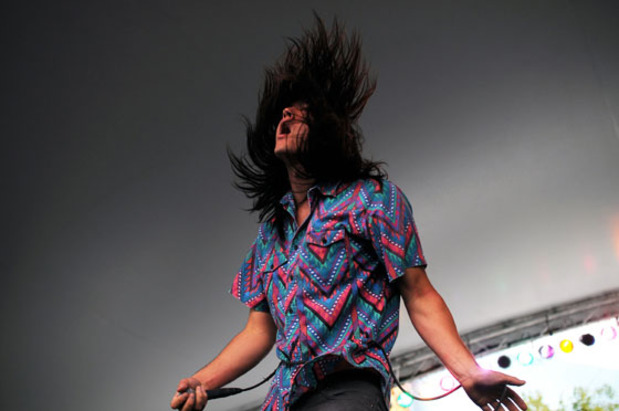 We started off the day by seeing Health directly next to the Experience Music Project. Still have no idea if that thing is supposed to look like the inside of an ear or a melted guitar or what. Health are one of those bands that you wouldn't expect to work at all in a festival scene where people are casually walking by. They're often dissonant and have a tendency to burst into brief moments of ecstatic/harsh noise when you're not expecting it. But they've refined their sound so that these moments come as part of a greater pop whole, and by the end it just seems like they've perfected the act of cramming hundreds of dense ideas into a traditional song structure. Maybe that's what happens when you grow up on Merzbow and, like, R Kelly at the same time? 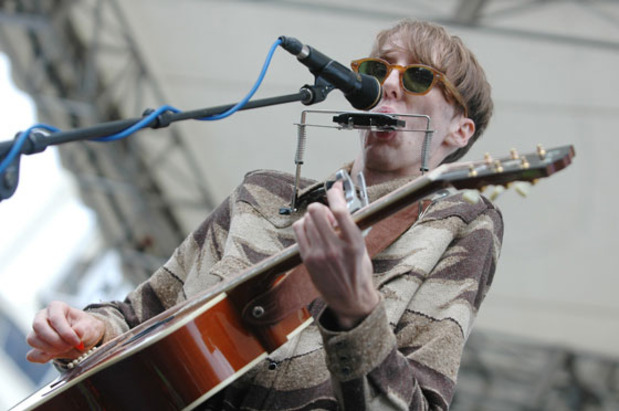 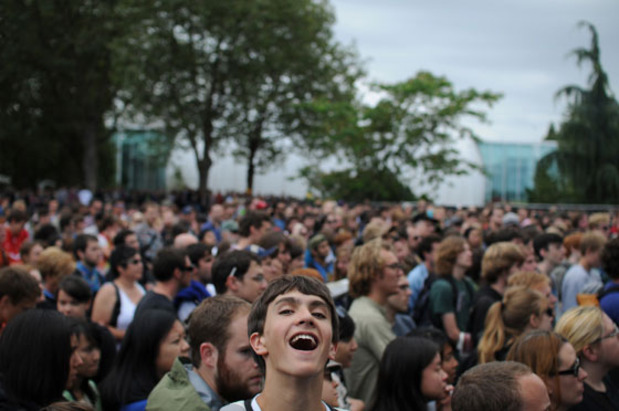 Following that, it was a brief walk past some little kid rides (shout out to the tiny roller coaster!) to see Atlas Sound. In the past, we've never known what to expect with Atlas Sound. We've seen Bradford Cox perform completely solo and unadorned and we've seen him perform with High Places on extra instruments. Both times, the shows lacked the beautiful atmospherics of the Atlas Sound albums and the energy of Bradford's main Deerhunter project. Here, though, he was in his element and completely alone with a guitar, a loop pedal or two and a harmonica. People lounged around in the grass and Cox slowly played his way through a well paced set that we could have napped to (in a good way!), had we not been so captivated by the way he evoked Neil Young without actually sounding like Neil Young. Maybe it was the way the set was rough without sounding poorly planned or unrehearsed, but it also could have just been his smooth falsetto and harmonica, floating over the looped guitar haze. 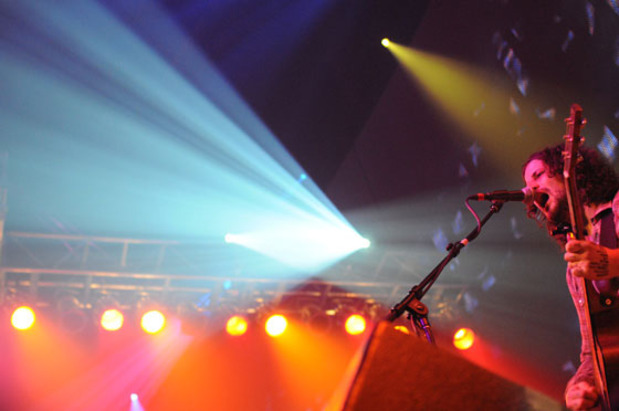 What followed Atlas Sound was a harsh shock to our system, because we found ourselves watching local gothic-folksters See Me River in the EMP Skychurch, which is basically a dark room with fractured video projections. Perfect for a DJ set from Moby, not so perfect for a band that is down to pull out an accordion when necessary. But they prevailed and made it work, playing FADER-favorite "Don't Pray for Blood" early in the set and then moving on to newer material as well as a sped up copy of The Pixies' "Where is my Mind," which we've all heard close to a million times (thanks Fight Club!) but still sounds great. 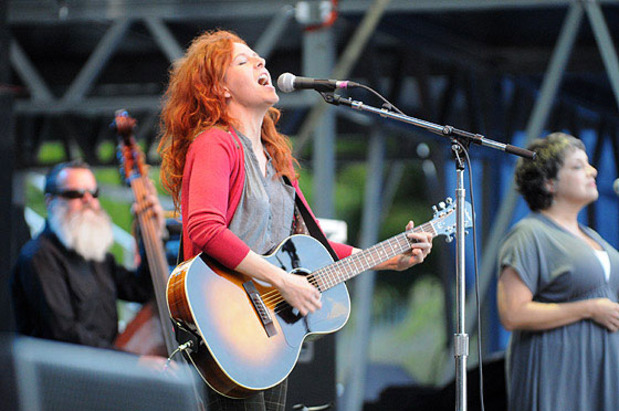 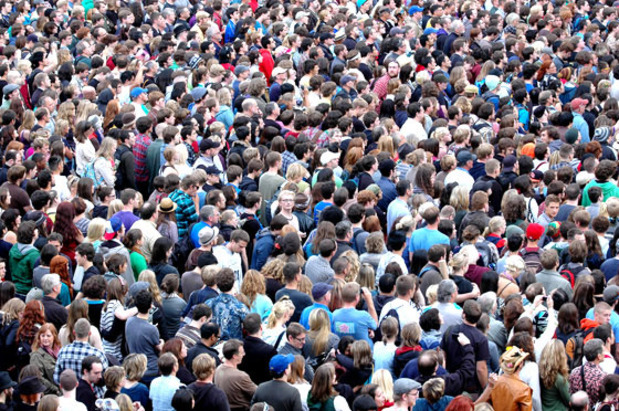 Then it was to the mainstage, which is actually in a massive outdoor stadium sometimes used for high school football games. Neko Case was midway through her set, and even though the sun barely came out all day, the sky managed to show some purple to perfectly accompany her wistful folk. We even caught some teary eyes in the audience during some not-that-sad songs. Just one of those shows.

By the tail end of her set, the anticipation was visibly, if not audibly, building for Bob Dylan. People were streaming into the stadium constantly (and quietly), packing both the floor and the bleachers. We weren't sure what to expect, other than that we knew Dylan's voice was completely shot. Didn't really matter though, he's just one of those dudes totally worth seeing at any point. 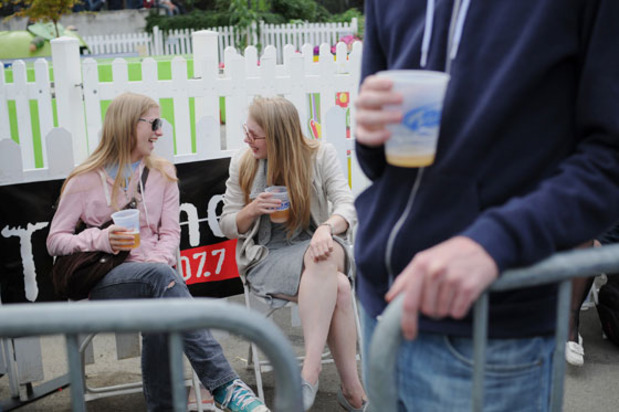 He came out to little fanfare, sticking to the back of the stage. We couldn't even see him and we were leaning against the barricade right at the front right of the stage. Luckily he stepped forward a couple songs in, wearing his now signature cowboy hat, his voice not much more than a hoarse croak. But as the set went on, he loosened up. His voice came easier, and although there was still absolutely no talking between songs (except at the end when he introduced his band), it actually seemed like he was getting into it. You have to wonder if he would do it if he wasn't.

By the end of his set, we'd moved to the bleachers to get a better view, and managed to bro down with a couple hundred baby boomers in headbands who were stoked beyond belief to be there. After Dylan's encore, people were still chanting for more, knowing there wouldn't be any as the stadium floodlights began to flicker on.