Because Bumbershoot sits right in downtown Seattle, and because admission is relatively cheap, the audience for the entire festival on any given day is usually dictated by whoever is headlining that evening. The crowd skewed older when Bob Dylan closed out the night, but this time it was a little more perplexing. Who, exactly, makes up Weezer's audience in 2010?


We'll get to that later. We began day two at Bumbershoot with some sun, which was welcome and unfortunately short lived. Before catching any music, we headed to the art galleries, which were situated near the most chilled out Budweiser beer garden ever and included a room devoted to a fragile looking structure made out of what looked like popsicle sticks that we could walk inside. There was also a 30 year history of alternative cartoonists in Seattle. Growing up here meant that this was a nostalgic trip for us, with many covers of Seattle's now-defunct free weekly music paper The Rocket on display. If someone wanted to go ahead and make an oversized hardcover retrospective of even just all of the paper's amazing covers we'd buy it (or ask for a review copy. No just kidding we'd totally buy it). 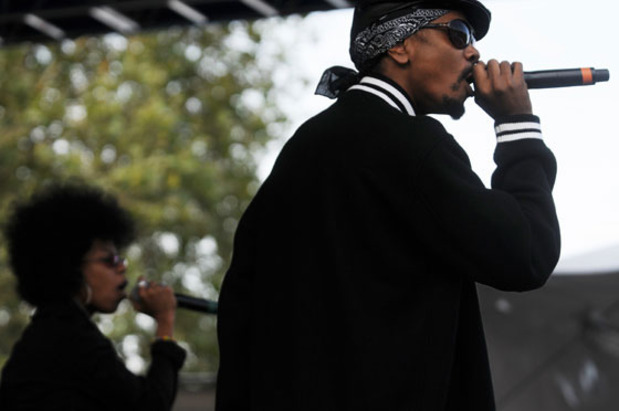 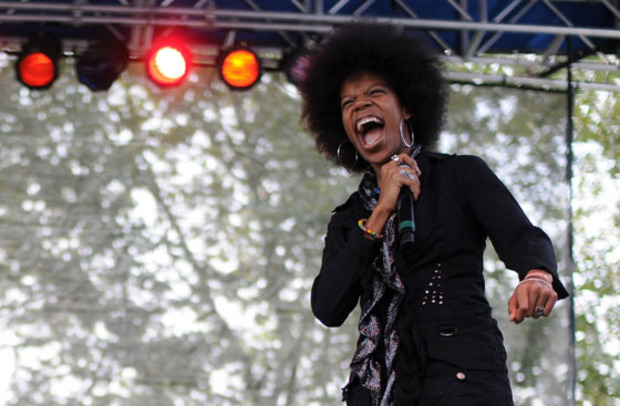 From there it was on to catch Georgia Anne Muldrow and Declaime/Dudley Perkins. Both artists have released more albums in the last five years than most people do in entire careers, so it's hard to know what exactly you'll get from them. In addition to a kid posted up in an MF Doom mask for hours on end at the front of the stage, we also got some teenagers trying to hide weed smoke by lighting incense and sticking it in the ground, some drunk moms dancing around, and a totally solid set from the pair. At times it seemed that Muldrow's vocals were not loud enough, but the duo managed to win the crowd over by running through a consistent set of particularly blunted jams. It should also be noted that Dudley Perkins, in the Declaime persona, has one of the more interesting and captivating rap voices around. He could read us a shopping list and we'd probably think it sounded cool. 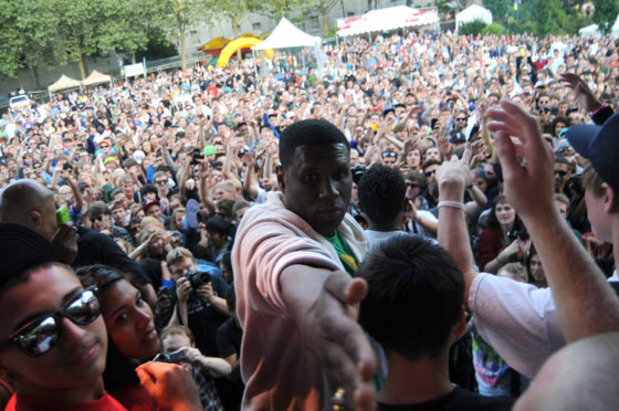 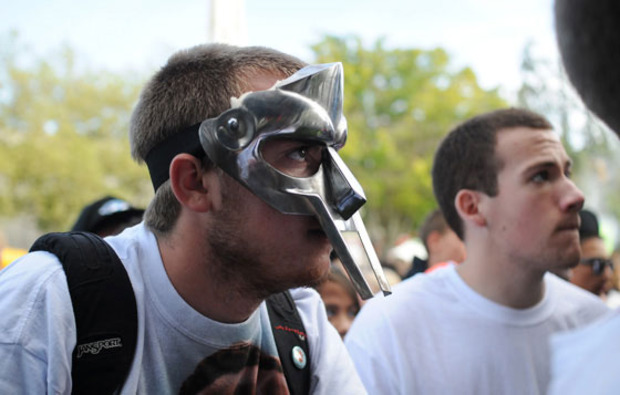 Almost immediately following the duo, Jay Electronica came out on the exact same stage. Situated right in the middle of the festival, it seems like a weird stage to perform at. There's a lot of other stuff going on, and it's easy to get drowned out. Jay Electronica avoided that by beginning with a massive bass throb that drowned out any noise in the immediate vicinity. One thing: he seems overly preoccupied with making sure the crowd hears Every. Single. Thing. he's rapping. AKA he cut a lot of his songs short so he could do them acapella, which can sometimes work but usually comes off as borderline ridiculous proselytizing even when it's good natured. Also: more raps about psychedelics! They always sound like unreleased Gravediggaz songs about having nightmares, and that is usually awesome. 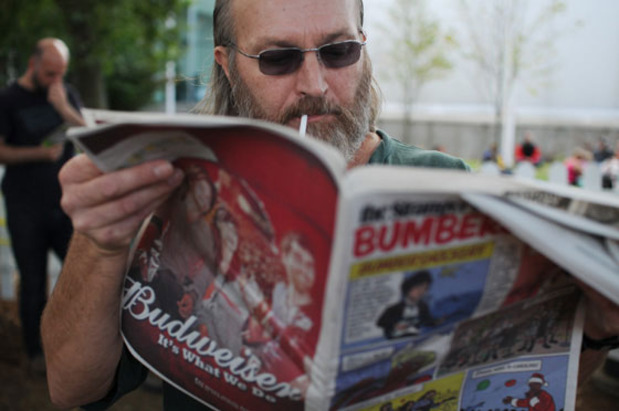 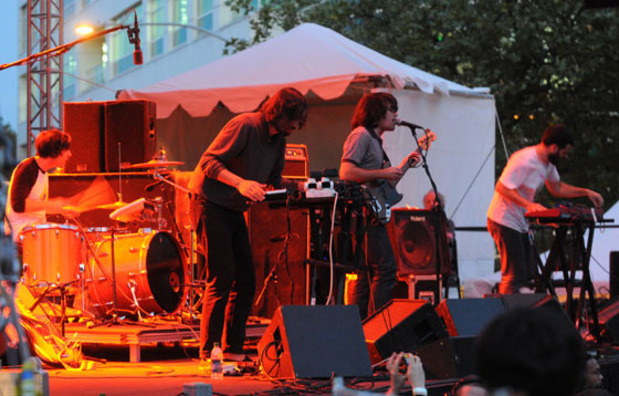 By now, the sun was setting so we went to see Delorean. Who, it turns out, have the best live show vibes of any band ever in the history of time. Little kids were dancing. Some dude with a butterfly net was dancing. A whole crew of teenagers were hopping around directly in the middle. There was even some good natured crowd surfing going on. If we were on drugs, the transition from this show to Hole's set at the exact same time on the mainstage would have been life shattering. 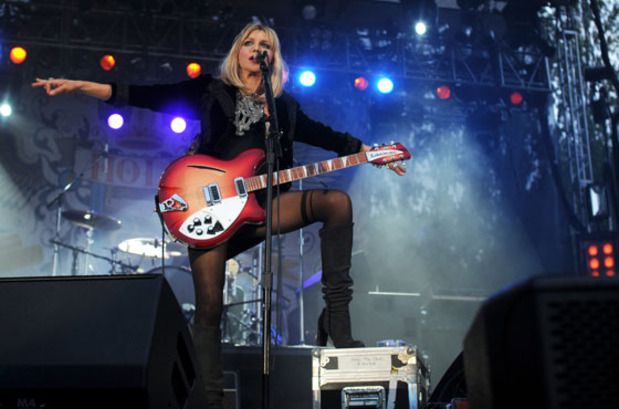 Turns out we walked in just at the right time, because Courtney Love was telling the crowd that she'd been covering this song for a bit now, was really bad at it, and would do it JUST THIS ONE LAST TIME before burying it forever. That song turned out to be Pearl Jam's "Jeremy," which she basically butchered. But that's okay! Hearing about the smattering of previous Hole shows, we prepared ourselves for the worst. What we ended up getting was a solid hour or so of Courtney being Courtney. She yelled at people in the audience, made weird rehab jokes and flubbed a couple songs. Her voice sounded like she smoked an entire carton of cigarettes and then washed it down with another carton of cigarettes. But her voice has always kind of sounded that way. It's the appeal of Courtney Love, and by extension Hole. The songs can barely hold themselves together. The fact that she was ever a pop star is weird enough as it is, and this show just proved that. Sure, it's not the same as seeing the original lineup, but it's still Courtney Love playing Hole songs, and that is awesome (when she's playing good ones). 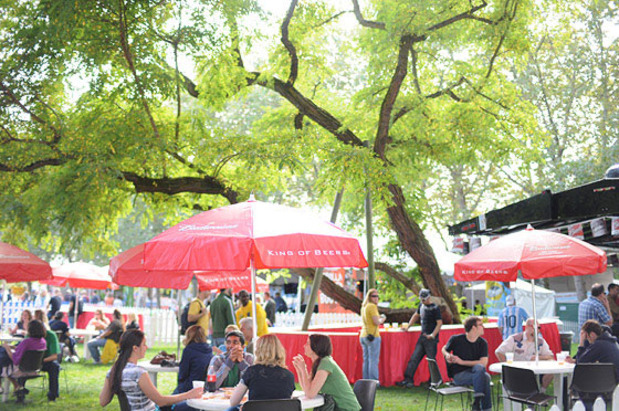 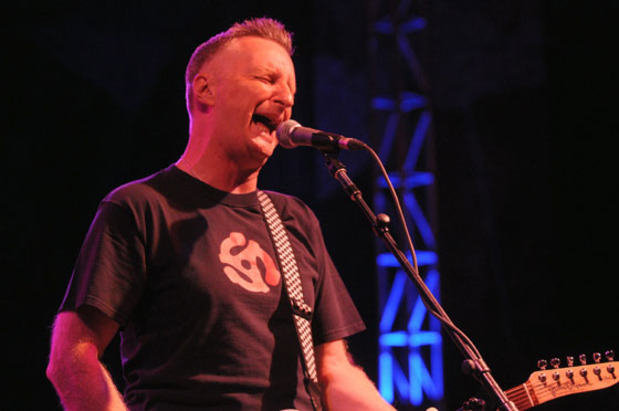 Before Weezer came on, we jetted to catch Billy Bragg, who stood on stage in front of a massive crowd with just a guitar and a microphone. Interspersing his songs with banter and (surprise!) Courtney Love jokes. What we managed to catch from his set was warm and heartfelt. Interesting stories about working with Woody Guthrie's back catalog bumped right up against extended riffs on the word "tumescence." 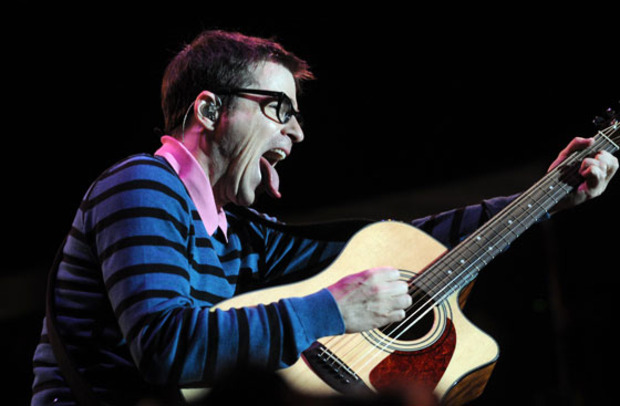 Okay so now Weezer. Like most people in their mid-to-late 20s, we have a complicated relationship with this band. Their first two albums guided and aided awkward adolescence, and after that everything turned into a downward spiral of disappointment and confusion over whether we outgrew Weezer or Weezer just outgrew themselves. Here's a theory: After making the poor selling, but critically acclaimed Pinkerton, Rivers Cuomo decided he'd rather sell records than get positive reviews and started making albums that gave people exactly what they wanted. Sure there were some growing pains (The Green Album and Maladroit), but after that the band seemed to find their new mall rock groove. Now they come off as a self-aware novelty band. 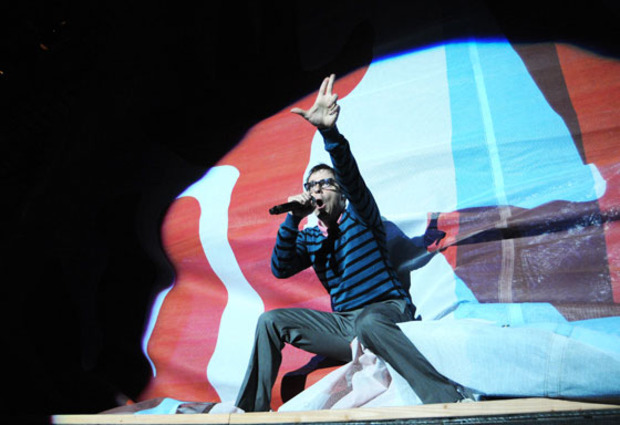 It'd be easy to say that Cuomo has just completely lost it, but watching him climb rafters and yell—almost constantly—that the audience was the best and that he DOES IT ALL FOR US!!!!, it seemed like a giant performance art project. Cuomo is a smart dude. He's lived over a decade of popular music. He knows what people like. How they want to feel. He hits all those spots, even if it makes him come off like a lunatic. He kicked beach balls into the crowd, threw reams of toilet paper and, inexplicably, rubber chickens. He wandered around the entire Memorial Stadium for over three songs. The band playing on stage while he sang from the bleachers and the crowd. He covered Lady Gaga in a wig, he abandoned his guitar for entire swaths of songs. It's never been a secret that Cuomo's dream was to be a KISS style rockstar, but he already exists too far outside of it. He thinks too much about music and his own career, so everything comes off as tongue-in-cheek. If Weezer were a new band, we'd take this all at face value. Instead, it comes off as a dude who, somewhere probably way too early in the game, got fed up with what was expected of him and decided that he knew what the kids and the labels wanted and he'd give them exactly that times 1000. This is a long way of saying that we were stoked when the band played songs off their first two records, but didn't like the new stuff. Except, looking around, there were a lot of kids who were SO EXCITED to hear "Beverly Hills." That's what Weezer means now, and whether or not we're all in on the joke, or there's even a joke we can all be in on, Cuomo is leading his band down one of the weirdest trails of hyper-aware rock music ever. 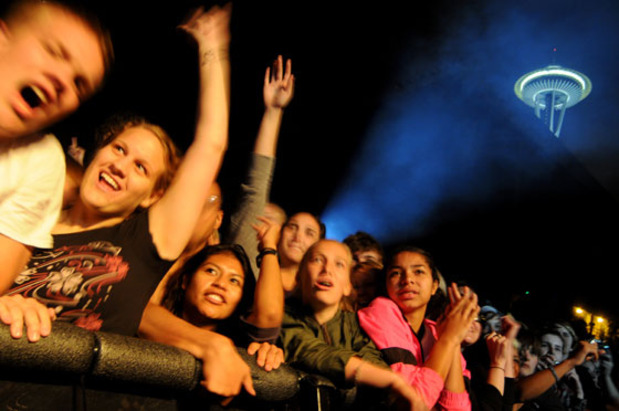