Raised on Reaganomics, go-go, and the neverending pursuit of freshness, Wale and Tabi Bonney rap for the capitol.

Wale is picking at some french fries in a burger spot on Georgia Ave in Washington DC, right by the Howard University campus, when I ask him about the first time he ever heard go-go music. “I remember the back of the school bus,” he says. “I went to school in Silver Springs, because DC schools were getting blasted at that time for dirty water, this that and the third. We used to use my cousin’s address, they interrogated me and knew we were lying but didn’t really care. There were nine of us—I was the youngest, and all I remember was them going, ‘Keisha got a big ol’ butt!’ and the bus shouting back, ‘Oh yeaaah!’ Now, it’s like the ‘Oh yeaaah!’ kids started growing up, and this is what we got.”

Go-go has been the sound of the District for years: live bands and deep percussion, overextended grooves, repetition, chants and audience participation. Chuck Brown and his Soul Searchers first molded the sound out of R&B yelps and James Brown funk in the late ’70s with tracks like “Bustin Loose.” Early rappers like Kurtis Blow and Salt N Pepa would often incorporate go-go elements into their tracks, and by the end of the ’80s, DC artists were starting to reach the rest of the country on their own, with hits from Trouble Funk (“Pump It Up”), the Junkyard Band (“Sardines,” produced by Rick Rubin), and EU, whose “Da Butt” was immortalized not only on Wale’s bus, but also in Spike Lee’s School Daze. At the same time, the city was just as well known for blights— from skyrocketing murder rates to “Bitch set me up!” surveillance footage of then-mayor Marion Barry smoking crack in a DC hotel room. For the next decade, as national interest would ebb and flow, go-go venues like Club U were consistently plagued by fights and stabbings, yet the music itself remained vibrant as second generation groups like Backyard Band rose up with a harder take on the sound; their frontmen were not MCs in the usual sense, but “talkers” or “callers” who took the traditional call-and-response elements in a more rap-like direction.

Still, just as with Baltimore club, Chicago juke and other regional inner-city subgenres, the relationship between go-go and present day hip-hop has been tenuous at best, running the gamut from occasional homage (Ludacris performing a go-go version of “Pimpin All Over the World” backed by Rare Essence on the VMAs) to straight jacking (Jay-Z taking RE’s “Overnight Scenario” for his “4am at the waffle house…” bit on “Do It Again”), but rarely meeting in a wholehearted embrace. This past spring, however, drivers could tune into DC rap radio almost any time of day and hear the signature go-go drum rolls of Northeast Groovers’ “Off the Muscle” blaring from their speakers. It wasn’t the actual song, but “Dig Dug,” a rap single built off a sizeable NEG sample, performed by a new artist named Wale (pronounced Walé). Over the hypnotic loop, Wale shouts out his hometown’s go-go bands, crack dealers and college hoops teams, appointing himself the “ambassador of rap for the capitol” before listing the sticker price on his SB Dunks. It was soon followed by two other go-go laced singles, “1 Thing” and “Breakdown,” and there was nothing else on the radio in
DC or elsewhere that you could even start to compare it to—until fellow local Tabi Bonney made it on the air a few months later with his own hybrid single, “Doin It,” and the wildly successful “The Pocket.” On first listen, “The Pocket” doesn’t seem musically beholden to the city in any way, but between Bonney’s relaxed, pause-heavy rhymes and homegrown expressions (When somebody syses you, you see a girl that’s tight or summ’n…she put you in the pocket! When you rockin bamas, stylin on ’em and stuff…), you realize it couldn’t have been birthed anywhere else in the world. 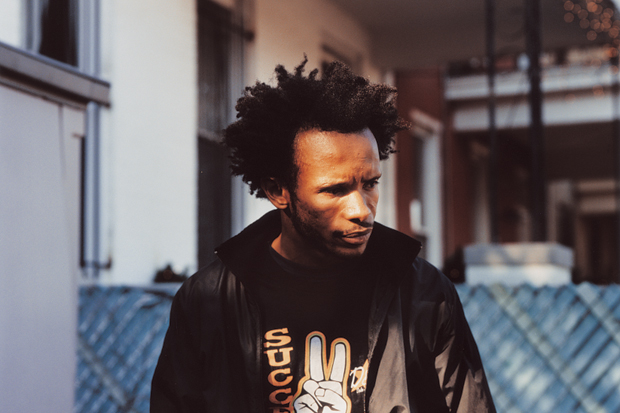 Inside Tabi Bonney’s small basement apartment on Capitol Hill, Ayn Rand’s The Fountainhead sits on a bedside table next to some PlayStation games and vintage Versace pillows, and an enormous flatscreen TV plays MTV Jams with the sound off. Hanging on one of the walls is a framed LP cover featuring Bonney’s father, Itadi. The elder Bonney made a name for himself in the West African country of Togo playing soukous and high-life music, and after marrying Tabi’s mother (a DC resident running an international school in Togo with the Peace Corps), the family remained on the road. “We would always be on tour, or living in France for a year or two,” says Bonney. “My sister and I would be onstage with him, dancing on TV shows in Africa for the president and stuff like that. Even then I knew I wanted to be in entertainment. I didn’t know if it was going to be music—I just knew I didn’t want to lead an ordinary life, because I wasn’t around an ordinary life.”

Once the Bonneys settled in the States, a preteen Tabi got a secondary musical education from his DC surroundings. “You had the Slick Rick, the Kid N Play influence, but the city was go-go,” says Bonney. “I was slightly sheltered—I didn’t go out to the clubs all the time because people were getting killed, but we had tapes, you’d hear it on the radio, sometimes bands would be set up on the corner, too.” While studying at Florida A&M in Tallahassee, Bonney saw some local success with his rap group Organized Rhyme, rocking tracks he describes as “underground hip-hop with a lot of samples—the Police, stuff like that.” But he always found himself returning to the sounds he came of age listening to.

“When I was working on my [solo] album, I was thinking back to those hustling days in the ’80s, the golden age of DC,” says Bonney. “There was a guy around Lincoln Park who we always looked up to, he’d have a brand new car every month. He had this pet monkey—he would come through and the monkey would be wearing all Polo. Who has ever seen that in the streets?” On “Lunchin” (“That’s like, if a girl or somebody is trippin, they lunchin,” Bonney explains), the mission statement is made clear: I ain’t no herb, no bama, no busta, no mark, no slouch, no loser, no nothin/ I’m that cat that’ll hit you with a couch or a stove/ I slap you in the mouth so bust it/ People be illin, thinking they tight/ Pardon me while I hurt they feelings!/ Lunchin! Lu-lu-lu-lunchin! The beats on his album, A Fly Guy’s Theme, are as minimal as the rhymes are easy, sometimes only snatches of an accordion sample (“You”), go-go loops (“Beat Rock”) or even just beatboxing (“On It”). As a result, its biggest charm lies in just how awesomely unassuming a throwback it is—Bonney describes the album as “cool guy tracks and little treats for the ladies,” and like Devin the Dude or Del the Funky Homosapien before him, he makes life as a laidback dude sound pretty damn exciting.

If Tabi Bonney is DC’s understated rap celeb, Wale is its baby Kanye West (or, as a WKYS program director would joke, “Wale Fiasco”), a supersized personality in golden Nikes ready to take over the world, jotting down almost too-clever lyrics in his Sidekick whenever he’s not compulsively checking MySpace messages on it. He’s already got a mini Grammy Family in tow: a longtime DJ, two eager managers and a clique of close friends with names like Jay Promo and Sneakerman Dan. Wale’s orbit even includes local video model Angel, a G-Unit favorite who just happens to drop in and drop jaws as we grab lunch on Georgia Ave; he insists they’re on strictly platonic terms. “She understands where I’m coming from, so we just bonded,” he says. “You can’t stop DC from saying what they want to say about you, and they say shit about her all the time. It’s good to have a homie in your corner who gets it.” 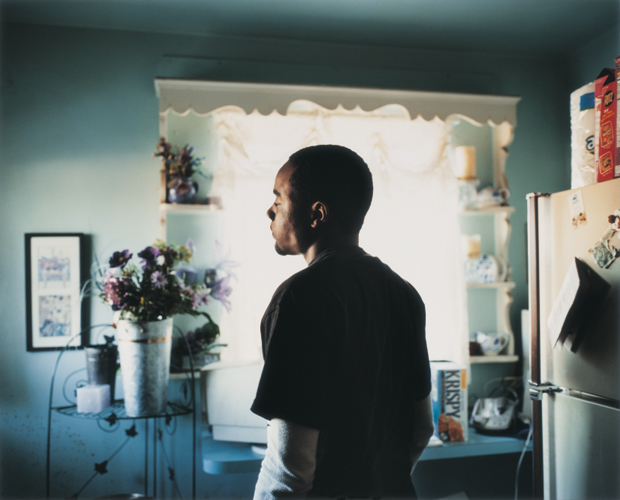 What do people hate on him for, exactly? “‘Wale not street, he just a go-go rapper, he not from DC, he can’t rap,’” he says. “But they know I’m good. It’s not like they can say ‘You suck’ and look to their left and their man’s like, ‘You right.’ It’s more like ‘You suck’ and their man is like, ‘I don’t know, Joe. You hear that mixtape?’” On his well-rounded Paint a Picture and Hate is the New Love CDs, distributed for free online and hand-to-hand throughout the city, Wale makes a convincing case for his embryonic stardom. Over Kanye’s “Touch the Sky” instrumental, Wale thanks listeners for their support like a pro (“Good morning DC! My name’s Wale, you prolly know me from the rap…”) and follows up “Dig Dug” with “They Warming Up Caine,” remaking Big Daddy Kane’s “Warm It Up” into a tongue-twisting indictment of DC’s drug problem (Government officials is rude in the District/ They do the shipment, we do the pitchin/ They do the scorin, we more like Pippen/ Lockin us up for the drugs that we dealin/ But I don’t know no hood nigga that’s a chemist), and “Lucky Me,” where Wale candidly speaks on growing up with two immigrant parents while shuffling between the Northwest DC projects and suburban Maryland. “I’m no gang banger, I’m just a real genuine dude in Washington DC,” he says. “I’m an embodiment of where I’m from. You might double-check me because I rock a little different from everybody, but that’s my own style. I’m gonna make that accepted.”

On Wale’s MySpace page, a snapshot of him and Bonney standing shoulder to shoulder has almost double the comments of any of the other photos. “THA POCKET vs. DIG DUG = TiGHT. YALL SHOULD mAKE A SONG 2GETHER,” “2 niggas puttin DC on da map!” and more than a hundred other well-wishers have left their notes of support for the duo’s sign of unity. “[Wale] was the first rapper from DC that I heard and was like, ‘He’s tight,’” says Bonney, and Wale holds his counterpart in similar regard. “Tabi’s always there for me,” he says. “He helped with everything, from dealing with the negative feedback to hooks to just everything.”

Yet even if they weren’t so friendly, the two MCs would probably find themselves linked for the rest of their careers. One glance at the cheesy mixtape covers in any mom and pop record store will tell you there are many other MCs hustling throughout the District, but Wale and Bonney were the ones to capture the imagination and expectations of their hometown, where “Taxation Without Representation” is printed at the bottom of license plates, and the collective desire for recognition is immense. As with any artist who’s tasted the first spark of success, Wale and Bonney no longer view their future as a series of “if’s,” but “when’s.” Bonney is filming a proper video for “The Pocket” with Swishahouse lensman Dr Teeth, while finalizing national distribution for A Fly Guy’s Theme, and Wale continues to record steadily, taking trips up to NYC to soak up knowledge jewels from Roc-A-Fella engineer Young Guru, who promises to link him up with Swizz Beatz and Just Blaze. “I been MySpacing Just to find out where he got those drummers,” Wale says in traffic, while listening to Blaze’s nine-minute epic “Why You Hate the Game” from Doctor’s Advocate. “He won’t tell me where he got the drummers! I’m gonna have them on my album. Go-go with an orchestra! If don’t hear that, you know somebody messed up my budget.”