Dream Team: Weston Currie and Grouper Collaborate on a Film

One rainy night this past September, filmmaker Weston Currie and musician Liz Harris bka Grouper posted up in a vacant building inside an industrial complex in Greenpoint, Brooklyn, to premiere Currie’s feature-length anthology, The Perception of Moving Targets. Harris was as much a spectator as she was a participator. Set up off to the side of a large, freestanding screen to live-score the film, she unassumingly played cued bursts of ambient guitar and looped sound samples, lacing each with her sweetly plangent voice. “Initially, I was going to be hidden behind a curtain,” she explains, her downplayed station meant to legitimize her contribution to the project without distracting from it. TPOMT is comprised of a series of four, tangentially linked dark, short films, which play out like an ambling dream sequence—its tacit dread built as much on Currie’s uncanny lens as it is on Harris’ moody drone.

Currie and Harris first struck up a creative correspondence after a friend played Currie Grouper’s 2008 LP, Dragging a Dead Deer Up a Hill. “I was like, Who is this person? Where does she live?” Currie says, recalling his initial excitement. “I’m always looking for people to collaborate with, and Liz’s music was already incredibly cinematic.” But it wasn’t until Currie fortuitously moved to Portland, Oregon, Harris’ home base, that the two began to work together, occasionally collaborating on music videos and short films. The exchange was fruitful, and eventually Currie approached Harris about doing a larger project based on her 2011 album AIA. “When I was a kid, and I would think about one day being a movie maker, I couldn’t help but picture how the music I’d listen to would drive a film,” explains Currie. “Liz really brought that back for me—especially with AIA—I was listening to it and making 100 movies in my head. The process [of making this film] was subtracting a few of those images.”

For Harris, working on AIA was “magical and synchronous” to Currie’s process for the film. “[With AIA] I had all these recordings that I hadn’t done anything with, and I knew that there was some way that they went together, but I wasn’t sure how,” she says. “So every day, I’d listen to those recordings to figure out what worked as it was and what stuff I wanted to rerecord.” The resulting album is two separate records, released under the shared title, AIA. “The idea of having two releases that were actually one and the same—like there’s an intangible third album in between—Weston didn’t know this necessarily, but a lot of his film is about this hallway that connects people’s interior spaces to each other,” Harris explains. “It was one of those moments of synchronicity.” 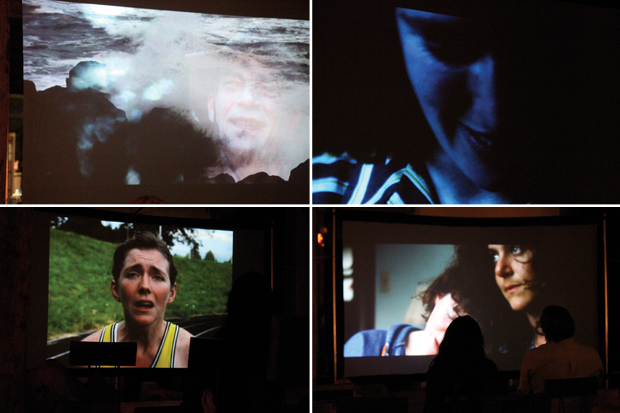 Much of the collaborative process was built around brief correspondences back and forth during the month leading up to Currie’s 10-day shoot—Currie asking Harris to disclose the meaning of a song, and Harris seeing snippets of the film and realizing that Currie had intuited her exact meaning. “We were both having insomnia, and then there’d be weeks where we wouldn’t talk, and the month Weston had to shoot everything I was away, and he had to do much of the film without me there to give him feedback.” The final product is an odd amalgam of its parts, built on fragmented images and nebulous narratives, set to music that is both made and not made expressly for it. The dominant storyline tracks a young girl’s anxiety about a track race, teasing at the formula of a linear, coming-of-age drama, only to dissolve into oblique horror tropes and a miasma of image and sound. By the last film, you’re watching interstitial clips of a home movie Currie’s grandfather made in the ’80s, which Currie found in a drawer midway through his filmmaking process and which weirdly mirrors moments and imagery in his own film. TPOMT is something to intuit more than to understand. “The film was not written,” Currie says, describing his process. “I do shot lists. I know images I need to have, but I never know how these stories are going to play out. It’s not haphazard, there’s just a stream of thought I follow until the end. It’s fitting then that despite Curie’s precise cueing and Harris’ premeditated scoring, the live accompaniment of TPOMT has moments of improvisation and will likely continue to evolve as the duo tour the film at festivals early this year. (Harris will also be releasing a limited artbook-DVD edition through the Grouper website). It is a combined output that is not so much a unified vision but more a shared sensibility. Or, as Harris sees it, “the way Weston works with the visual and the way I work with sound, they exist as rooms near each other in the same house. There’s something akin in our processes.” Fair enough. But it’s also quite nice when they share the floor.