Noise Pop’s policy of simultaneous shows means you have to choose carefully from the evening’s menu selections. Night One’s entrees offer a choice of chicken or fish in the form of Flaming Lips playing The Soft Bulletin in its entirety or a solo set from Craig Finn, formerly of the Hold Steady. We choose the Lips—it’s opening night and Wayne Coyne will bring the confetti.

The line at Bimbo’s (capacity: 685) wraps around the corner, but it’s moving. The high-energy harmonies of Zach Rogue and the opening band, Release the Sunbirds, warm up the crowd, whose median age hovers around 42. From the stage, Coyne’s wife, Michelle, takes pictures of the audience, prompting an eruption of cheers. Coyne himself emerges drinking a Red Bull, decked out in a giant curly wig—oh shit wait that’s his actual hair—purple feather boa and white shirt, looking uncannily like Rick James. He smiles beatifically and takes a digital survey of the crowd with his iPhone, basking in the adulation while stoking it. This guy makes narcissism look like fun.

Out come the confetti blasters, the Technicolor balloons, the flashing lights. These songs are all about minor incidents in daily life—cutting your hand, putting the groceries away—zooming out toward big-picture revelations, and the crowd is feeling the effects. In the ladies room, a girl confides in the bathroom attendant about her parent’s messy breakup. “You need to live your own life, baby,” says Kimberly, the attendant (for that is her name!). This is perhaps more inspirational than anything Wayne Coyne has said tonight. 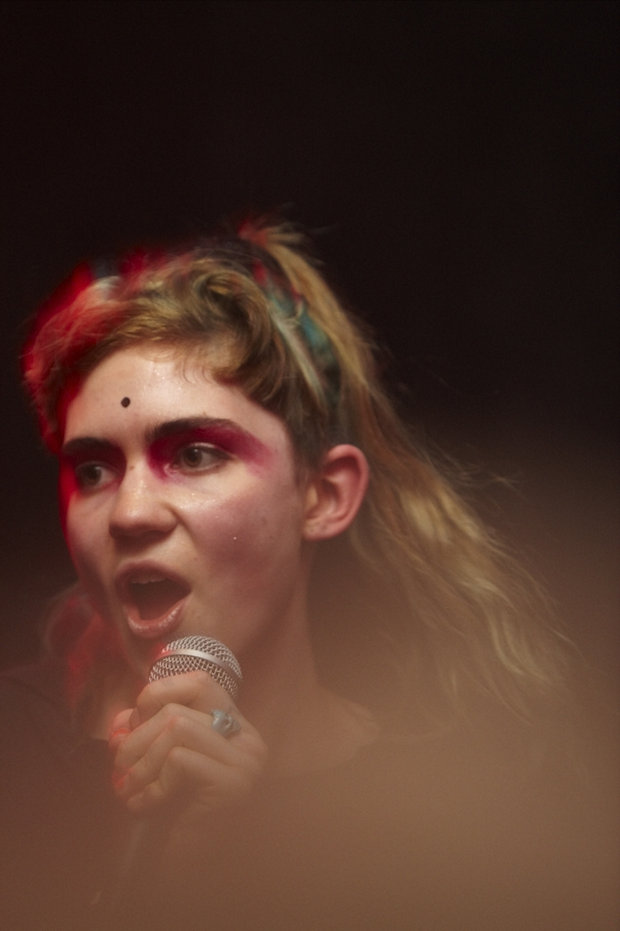 Day Two we decide to check out some local bands and maybe even hear music by a female! At Café du Nord, PreTeens take the stage with one, possibly two, band members sporting shiners (intramural fight or just hard SF living?). They’re followed by the charismatic local act the Tambo Rays, who fly through a fun, high-energy bunch of songs and vanish. Over at Bottom of the Hill, Disappears plays a lean, fierce and elegantly glum set to the appreciative nodding of a predominantly male crowd before shambolic headliners The Fresh & Onlys pull a presto-change-o on the mood with their loose party vibes. Outside the club, Disappears bassist Damon Carruesco, is looking for a cab and lamenting that the Grimes show is sold-out—like, “sold-out, sold-out,” he tells us. If only he’d known that when we arrive at Rickshaw Stop we’re able to walk right in.

The crowd at Grimes is noticeably younger, gayer and more female and than everywhere else we’ve been, and she’s got the room’s energy up. Afterwards, she greets fans at the merch table; given Grimes’ big stage presence, Claire Boucher is surprisingly cherubic and shy face-to-face. “This has been my favorite show of the tour so far,” she tells them and smiles. 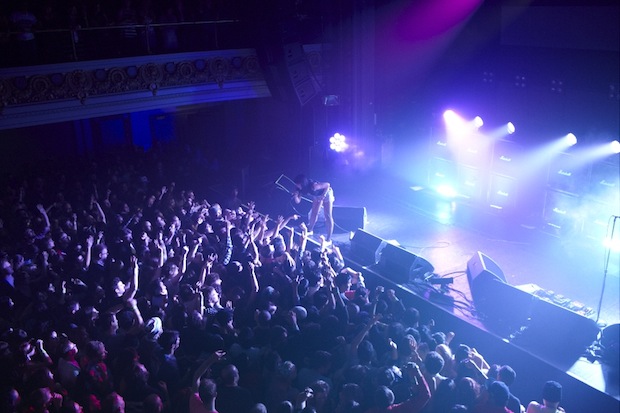 There are plenty of bands worth seeing Thursday night—the Soft Pack, Sleigh Bells, Two Gallants, Superchunk’s Mac McCaughan—but even so, there’s never any question of missing Built to Spill play the Fillmore. In this regard, we proudly fly our BTS fan flag alongside frat guys, jam band fans, oldish people and every other sucker with unabashed love of the controlled anarchy and intricate, loud-soft-loud classic indie rock.

First, though, we jam to the Regency Ballroom, where lipglossed and fishnetted throngs have gathered in anticipation of Sleigh Bells, hot off their SNL appearance last week. Opening are Black Bananas, Jennifer Herrema’s newly rebranded RTX, who will split immediately after their set to drive 14 hours to a gig in Seattle—an exhausting proposition the band has blunted with a few cocktails (yeah, no, they won’t actually be manning the wheel). Herrema emerges behind a shield of bangs and tattered jeans—perhaps her own design for Volcom?—playing Axl Rose mic stand slides and smearing her way through a bar-band set. She’s set the dial to Rock Star, but tonight the crowd is withholding love until the headliner. 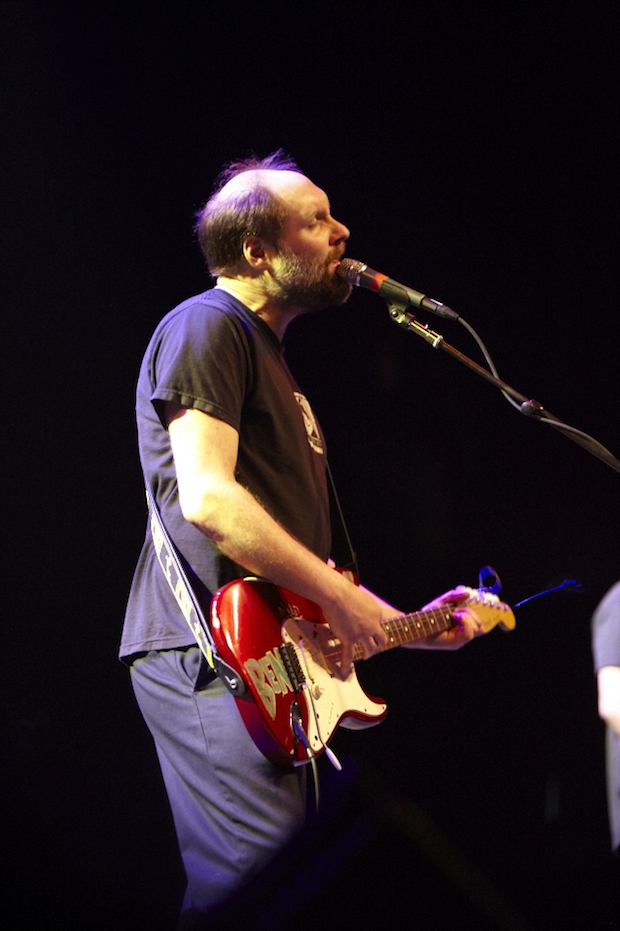 A cab ride and handstamp later, we’re inside the Fillmore, listening to Doug Martsch’s unmistakable plaintive warble serenade a rapt and rapturous crowd. On stage, he bears a passing resemblance to Louis CK—balding pate, dark T-shirt, bearish carriage. Never forget that cult heroes can disguise themselves to walk the streets among us. Martsch & Co. take us through some classics—“Randy Described Eternity” (which, think about it, is one of the sickest song titles of all time), “Else,” “Carry the Zero”—and although time doesn’t exactly stop, for a little while it certainly slows down.

Next night, new vibe. Swap out the patchouli and Patagonia for lucite bangles and liquid eyeliner: Portland’s Chromatics and Glass Candy are coming out to play. Mezzanine in SOMA is like an ’80s dance club, angular and neon, and for once, the people of SF have come dressed to disco. The view from upstairs overlooks a sea of writhing bodies on the dancefloor, and it’s hard not to flash on those lethal crowd stampedes at European football matches. The vibe here is decidedly up, though. Chromatics, Johnny Jewel’s “other” band, have their thing down cold; when singer Ruth Radelet croons My My Hey Hey to open, looking like a mix of Nico and Jane Birkin, you can tell they’re working some fierce tip tonight. 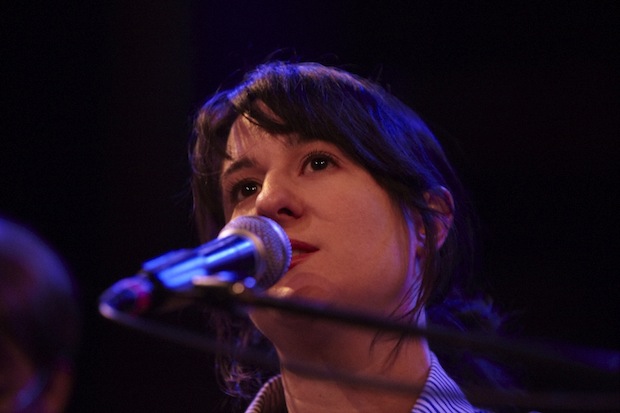 Saturday is Culture Club time for Noise Pop, an all-day cross-pollination of performances, talks, art exhibitions, and live demonstrations at Public Works in the Mission, a rawish two-floor space with exposed ducts and beams and two gargantuan bars that are already, at 1 PM, being put to work. Everywhere you turn, members of San Francisco’s creative class are greeting each other with big, emphatic hugs. “Did you just start following me on Tumblr?” one girl in cat-eye glasses and a turquoise thrift-store smockdress asks another. “Yes! I love you!” Everyone’s bummed because Big Freedia has to cancel her bounce workshop due to illness (emergency surgery, according to word on the street), but the slack is picked up by Thao Nguyen’s tribute to public radio and a talk with Johnny Jewel of Chromatics/Glass Candy fame. There are useful workshops on using Ableton from Thavius Beck, Steve Nalepa and B. Bravo; gluten-free baked goods for sale; a ZipCar info station; and a table where you can “make art” out of repurposed glass bottles, planks of wood, old computer keys, magnets, doll parts and fur. Skulls-and-serpents artwork by Claire Boucher (Grimes) bedecks one upstairs wall. Imagine walking into a Portlandia episode, minus the irony.

Night falls, and it’s time for our daily dose of rock. For this we roll to the Great American Music Hall, an ornate little opium jewel box of a club where Archers of Loaf will be banging out their set. Archers is the final ’90s indie powerhouse to play Noise Pop; we’ve already been treated to the high-gloss psychedelic production of Flaming Lips, and the sweetly jammy Built to Spill experience, but as yet we have not seen a band of white, middle-aged men who bring the same fire to their music that got them into this racket in the first place. Openers Hospitality set the stage: singer Amber Papini sounds a little bit like Chan Marshall, and the band plays songs from Friends of Friends, their recent Merge debut. They’re followed by the Big Sleep, a three-piece who lay down textured, muscular instrumentals and joke about moving to California. Finally, Archers come out and assume the power formation: Eric Bachmann front and center, flanked by his bouncy bantam henchmen Eric Johnson and Matt Gentling. They come out swinging for a crowd that is 90% male and 100% in blissed-out singalong mode. Maybe every band should take a 13-year hiatus to re-energize; tonight, Archers are providing a solid argument.