Odd Future have been posting fully-formed records to their Tumblr since last February. Since, they've appeared in FADER 71 and on MTV, met Justin Bieber, performed on Fallon and with Diddy in Austin and at Coachella. At their first NY show we saw almost all the bloggers, twitter nerds and weird photographers we know (+ Mos Def). At their second, Dame Dash was there, looking hungry. Tyler, the Creator and Hodgy Beats/Left Brain project MellowHype have banked one-off deals with XL Recordings and Fat Possum Records, while extended family members Mike G, Domo Genesis, lost-and-found Earl, DJ/producer Syd, tiny associate Taco and Beyonce's friend Frank Ocean have gone without an umbrella distribution deal. This is not for lack of interest—Jay-Z bought dudes tacos in Texas, they've reportedly been chased by Roc Nation, Interscope and Bad Boy, too.

Now Odd Futurehave formed their own record label and will go into business with RED, a division of Sony that develops artists and independently distributes music from smaller imprints. Manager Chris Clancy told Rap Radar,

It’s based on getting the distribution deal we’ve always envisioned that allows the group to “sign themselves” to their own company and keep their masters. They will have 100% creative control of all aspects of their music, art, and release schedule with no 3rd party participation in outside business. Freedom and ownership was the whole point. RED and Sony know that its in everyone’s best interest to maintain the group’s authenticity and control. They built it, they deserve it. There’s no cheesy hooks or fluorescent liquor product placements in the works...It’s about to be fun... and different.

Somewhere, Ray Charles and all the other dudes who once managed to own their own shit, are laughing like Thurnis. Congratulations to all the fans: 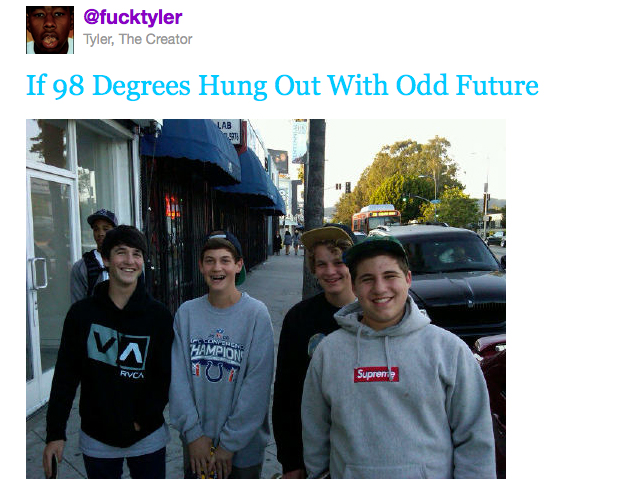